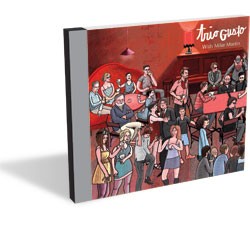 Fans of Radio Bean regulars Trio Gusto will be spilling their Five-Dollar Shakes to put hands on the group’s latest release, Trio Gusto with Mike Martin. The 13-song assortment of jazz standards, gypsy waltzes and swingin’ French chansons neatly represents the musical influences and abilities of the Burlington-based quartet.

From early jazz hits and traditional blues numbers to Parisian swing and back again, Trio Gusto whisk their sonic blend into each of the album’s tracks, taking songs best known for their Django Reinhardt or Duke Ellington renditions and making them their own. And while there’s no mistaking the traces of the Parisian gypsy-jazz musician in the rhythm and lead guitar work of Mike Martin and Buck Maynard, respectively, the mature restraint here smacks of egalitarianism within the group: None of the four hogs the limelight.

Take, for example, the album’s jumping-off song, “After You’ve Gone,” a 1918 Henry Creamer/Turner Layton collaboration on which Reinhardt, Judy Garland and Louis Armstrong have each taken a turn. Though he’s got the chops to make Johnny Dodds smile in his grave, clarinetist Geoff Kim sticks to subtle understatement through the tune’s first few sections, weaving complementary two- and three-note strands into Martin’s punch-drunk lyrical lines. But when the solos come around, Kim’s horn squeals, squelches and sings like a bird released from its cage.

Maynard walks the same line on lead, teasing playful licks and twinkling chords out of his guitar on songs such as “Black Trombone” and “Careless Love.” His contributions layer as sweet as custard between the downbeat juking of Martin’s rhythm guitar and the unflagging ambulation of John Thompson-Figueroa’s double bass. Sure, Maynard struts up and down the fret board on “The Sheik of Araby” — an album standout. And he might as well be plucking at our own heartstrings with his opening notes on “I Can’t Believe You’re in Love with Me” — another Reinhardt notable. But there’s no shadow casting here. Each man plays his part, as if acknowledging that none is bigger than the songs themselves.

It’s a recipe that doesn’t grow stale over the course of the album — in part because the songs themselves are so varied, and because the strength of the group is in the balance its members strike. When egos step aside and the music — with all its history, tradition and great players — takes center stage, man, does it sound good.