Racing to the top with Donna Smyers 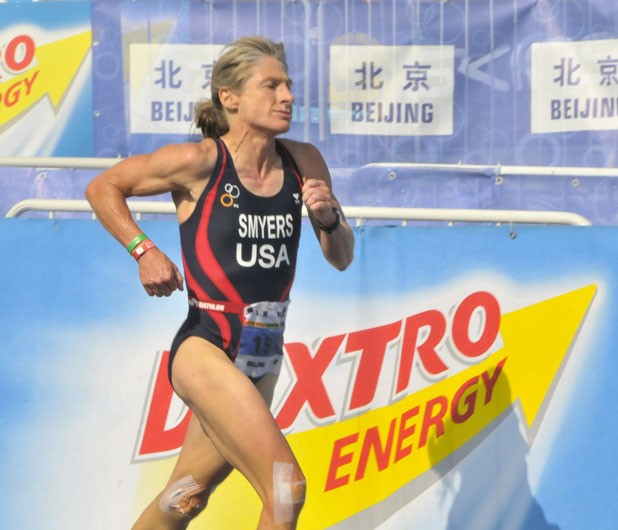 Donna Smyers is one of the Green Mountain State’s grittiest athletes, with more than 25 years of racing triathlons under her belt. She nailed a 2:59 Boston Marathon, won her age group in the Ironman World Championship in Kona six times, completed the Mount Washington Road Race nearly 20 times and was the only Vermonter to win her age group at last year’s USA Triathlon National Championships in Burlington. This year, she won the title again, clocking a 2:24 in last Saturday’s Olympic distance race to top women ages 55 to 59.

But there’s another top in sight — the Race to the Top of Vermont, this Sunday, August 26. Every year since 2008, when the 4.3-mile slog to the summit of Mount Mansfield was founded as a fundraiser for the Catamount Trail Association, Smyers has either run or mountain biked all the way up Stowe.

“I love going uphill,” Smyers says. “And I hate going down — I have bad knees.”

Smyers, a physical therapist, reveals this to me on a recent Tuesday-morning run, during an easy and picturesque loop around Sodom Pond in her town, Adamant.

I’ve met Smyers before — or at least I saw her backside as she passed me on my own way up Mansfield in August 2009. Despite suffering from the flu, I decided to run the Race to the Top and was humbled by dizziness, nausea, breathlessness and the initial steep climb. Smyers finished in a blistering 45:56, second (among female runners) only to world mountain-running champion Kasie Enman. By the time I crossed the finish line after a miserable 53:28, Smyers was already well into recovery mode, stretching and laughing with friends in the mountaintop fog and looking for a ride back down to the base.

So when I’m given a chance to join Smyers on a run from her office, Fixer-Upper PT, I pounce, eager to get some training tips as well as learn what makes her tick so darn fast.

It helps to have 27 years of experience for one thing. Smyers tells me she ran her very first triathlon in 1985 — in Burlington. She completed her second and third tris in the same town in the following two years. “I didn’t really train for them,” she admits. “I just knew how to swim, bike and run.”

Growing up in Connecticut, Smyers was on a summer swim team and ran to keep her weight down. She didn’t race competitively at Dartmouth, where she was a gymnast and 30 pounds heavier than she is today. But her sister, Karen Smyers, was a professional triathlete. While Donna was studying physical therapy at the University of Connecticut, her car broke down, and she had to make a 38-mile commute on her bike. “Suddenly I realized that if I put in the volume,” she says, “I get faster.”

Yep. Though she insists she was “strictly midpack” in her triathlon efforts of the early ’90s, Smyers has since dominated her age group in triathlons, afraid neither of the race timing clock nor of the internal one that might tell other women to slow down as they age. Putting in 10 hours a week of training most of the year, and 20 or more in the weeks leading up to an Ironman distance event, Smyers tops results list after results list.

“If you’re mechanically sound, running isn’t bad for you,” says Smyers, who says she has gotten lucky when it comes to injuries and health. She’s dropped out of only one race because of a bad cold that made her cough every time she ran, and has learned when to back off in her training. The only time she’s gone to the medical tent (knock on wood) is to participate in scientific studies of endurance athletes.

“My knees are poorly aligned, so I tape them in place,” she says. “I have a lot of little things, but because I’m a PT, I address them quickly. It’s all about management.”

So is her strategy for the Race to the Top, which, now in its fifth year, is presented by the North Face and expected to draw some 800 runners, bikers and hikers from across North America on Sunday.

“The first half mile is the steepest,” Smyers says. “If you get in debt on that hill, you carry that load the entire race. So the most important thing is to go slow that first half mile — which nobody does.”

Smyers has the same nutritional plan for every race, too: a breakfast of cereal, milk, coffee and fruit. She might refuel with electrolyte drinks and sports bars and gels (“my fallback is orange Gatorade,” she says), but the postrace ritual stays the same. “Try to eat real foods, real soon,” Smyers says of her recovery diet of chocolate milk, yogurt and turkey sandwiches.

At this point, last-minute registrants for the Race to the Top can’t do much besides rest and carbo-load. But for future racers, Smyers has some advice. “If you’re going to run up, train on the bike, and if you’re going to bike up, train on the bike,” she says. Why? Smyers explains that, whether you take the mountain on two feet or two wheels, “it’s more like biking muscles than running — it’s all positive work; there’s no shock absorption.”

Using the term “positive work” for the feeling of running or biking straight uphill for 4.3 miles may be a stretch. I’m determined to get my revenge on the Race to the Top course, but not this year. Instead, I’m going camping with some girlfriends, happy to be at lake level. I’ll be remotely rooting for Smyers — not only to get her 45 minutes, but also to continue inspiring girls and women to keep going. As she says of her racing career: “I want to do it forever.”

But the thought she says will cross her mind as she crosses the finish line? “Thank God it’s over.”

The North Face Race to the Top of Vermont, Sunday, August 26, for walkers, noncompetitive hikers and runners; 10 a.m. for bikers. Last-minute registration (space permitting) on Saturday, 4 to 6 p.m., and Sunday, 7:30 to 9:30 a.m., at Midway Lodge at Stowe Mountain Resort. $65. An MVP Health Care Run for Fun youth event takes place Sunday at noon at Midway Lodge. For more info, contact the Catamount Trail Association at info@catamounttrail.org or 864-5794. catamounttrail.org