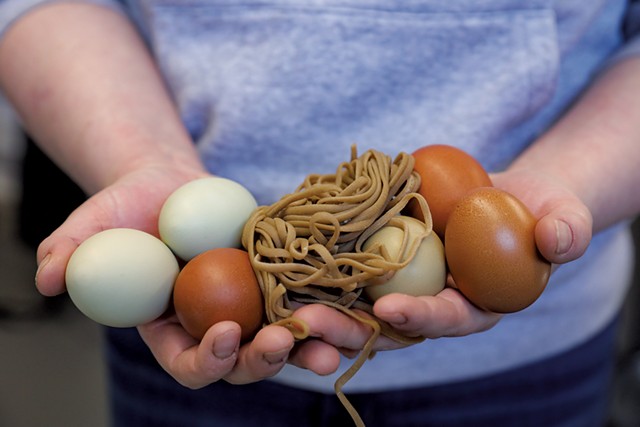 As the snow melts and the ground thaws, farmers start their first seeds and their customers purchase community-supported agriculture shares, promissory notes for the weekly boxes and bags of abundance to come. The arrangement gives farmers the jump-start cash they need and a guaranteed market for their produce.

Trenchers Farmhouse follows the tried-and-true pay-ahead CSA model, but it doesn't supply bags of kale or root vegetables. The eggs and heirloom vegetables that Jennifer and Giacomo Vascotto produce on their hilltop farm in Lyndonville all end up in pasta. The shares they sell are memberships in their pasta club.

Three tiers are available: fusilli ($450), linguine ($850) and lasagna ($1,250). Each corresponds to the amount of credit a club member can spend on any Trenchers products at the self-serve farmstand on Sugar Maple Road or at farmers markets in Montpelier, Stowe and Littleton, N.H. Members get a discount (5 to 15 percent) on Trenchers' take-and-bake meals, sauces, breads, desserts, eggs, and roughly 15 varieties of pasta, such as bucatini, malfaldine, radiatori, creste di gallo, bright purple beet gnocchi, black linguine nere, blueberry-corn tortelloni and gluten-free linguine.

The pasta club wasn't in the couple's initial plan. 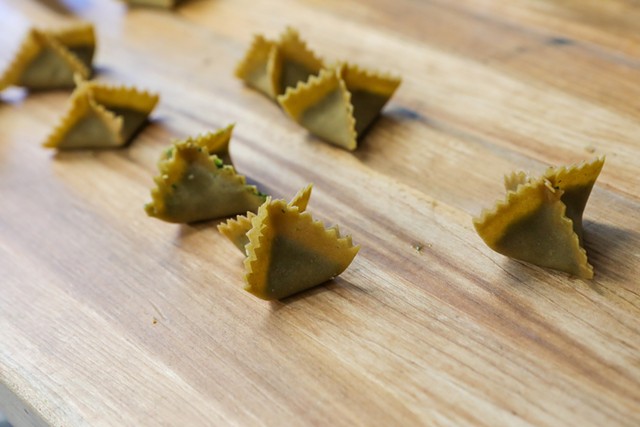 The two chefs met in Tuscany, working as apprentices for renowned butcher Dario Cecchini. Giacomo, now 29, grew up in Modena in Emilia-Romagna, a region nicknamed "the stomach of Italy." Jennifer, 32, came to the apprenticeship from Tokyo, where she was learning to make soba.

They moved together to Jennifer's native San Francisco Bay Area, where both worked in Michelin-starred restaurants. After more than 10 years in high-end kitchens, Jennifer started her own private catering company. She'd been suffering from food allergies, and she was getting sick from the regular tastings required in her upper-management roles.

"We were looking for something more connected to the food," Giacomo said.

"And to each other," Jennifer said.

When Jennifer's mother retired to Vermont's Northeast Kingdom, she persuaded the couple to join her on her Lyndonville property. Jennifer and Giacomo arrived in 2019 and launched Trenchers Farmhouse in May 2020.

Trencher was the name given in medieval times to stale bread that was used as a plate. Nodding to Giacomo's roots, the couple calls their business "the Gastronomia of Vermont." Italian gastronomias are small shops that sell specialty foods and prepared dishes. Trenchers' version is the farmstand, stocked with its own farm-fresh products as well as balsamic vinegar, olive oil and chocolate from the farm's partners around the world.

Jennifer and Giacomo also planned to sell their pasta and other value-added products at local farmers markets. The uncertainty surrounding those markets early in the pandemic inspired them to create the pasta club.

"We weren't sure anyone was going to sign up, because no one knew us," Jennifer said. But word traveled fast, and the club sold out.

"CSAs take a leap of faith," Giacomo said. "And this was a lot of faith."

The first season's club, in 2020, was closer to a traditional CSA, with set boxes each week. But two years at markets showed the couple that their customers' shopping habits varied by location. For example, Stowe shoppers took home twice as much gluten-free pasta and more vegan products than patrons at the other two markets. To cater to individual preferences, Jennifer and Giacomo switched to the choose-your-own, store-credit model. They currently have 24 pasta club members and hope to reach 40.

They also plan to sell this summer at more farmers markets, where Giacomo's Italian charm and their bomboloni — filled Italian doughnuts — have earned quite a following. They often sell their entire stock of 300 bomboloni in less than two hours.

"It's a tiny piece of what we do," Jennifer said, "but it's turned into this gateway drug at the market. Everybody will try a doughnut and then say, 'Well, let me see what else you do.'" 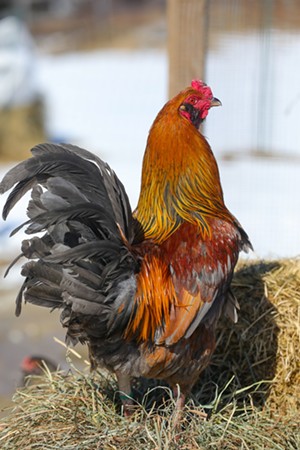 The Vascottos started Trenchers with 50 pastured hens in 2020; this year, they'll have 300 chickens representing more than 10 heritage breeds, including speckled Sussex and Midnight Majesty Marans. They used 25,000 eggs last year in a spectrum of colors, including light and dark brown, baby blue, gray, and olive green.

In this "shoulder season," customers can buy cartons of a dozen rainbow eggs, but from June through October, all the eggs find their way into pasta.

The chickens were the center of the farm's action on a post-snowstorm day in early March. A flock of 200 occupied four mobile coops built by Giacomo. They pecked at their certified organic, corn-free and soy-free feed — plus spent grain from Whirligig Brewing in St. Johnsbury. The brewery, incidentally, gets its grain from the same place where the Vascottos buy theirs for pasta: NEK Grains in Waterford.

In the spring and summer, the mobile coops rotate around the pasture so that the chickens can eat fresh grass, in addition to pasta scraps from the kitchen and samples left over after market.

"They love the noodles more than anything else," Jennifer said.

"It's kind of a circle of life in that sense," Giacomo added.

A new flock was busy in the farm's high tunnel greenhouse, built last year on a hillside that had to be leveled to accommodate it. The chickens, with their pecking and fertilizing, were helping rebuild the high tunnel's soil, making it suitable for growing tomatoes and peppers this summer.

Elsewhere, the farm was still slumbering. Trenchers operates on just 10 of the property's 100 acres. Two 100-by-100-foot fields will hold most of the 87 varieties of heirloom vegetables, 80 percent of which are Italian.

Right now, the fields hold fall-planted garlic and covered parsnips, waiting to be dug out this spring. Two hedgerows of fruit trees, berries, asparagus, saffron and horseradish stand nearby, plus a large patch of blueberry bushes. The couple added those last year in the hope of making a blueberry balsamic vinegar with the help of Giacomo's good friend, a balsamic producer in Italy. They also grow five varieties of mushrooms.

Before Jennifer and Giacomo started farming, most of the property was a cow pasture for a neighboring farm.

"We really started everything from scratch," Giacomo said.

They were also starting from scratch as farmers; the extent of their agricultural experience was Giacomo's occasional assistance on his uncle's farm. They now have two farm managers who help run the farm with regenerative, organic practices, including zero spraying and minimal tillage.

In a second greenhouse, racks with grow lights waited for the tomato, pepper, cardoon and cauliflower seeds that the couple planned to start the next day.

"This is our most important time of the year," Jennifer said. "Whatever we grow is what we have."

Throughout the season, Jennifer, Giacomo and their small team of employees will turn tomatoes into a base sauce. They'll ferment, pickle and preserve other vegetables for sauces such as spicy eggplant Calabrese, kohlrabi alla vodka and Broccolo Fiolaro di Creazzo pesto.

Several of their vegetable varieties — including the Broccolo Fiolaro di Creazzo, elephant and Lorz Italian garlic, Jimmy Nardello sweet peppers, and Fiaschetto di Manduria tomatoes — are part of the Ark of Taste assembled by the international Slow Food movement, which seeks to preserve foods facing extinction.

Slow Food started in Italy, and "it really is a big thing there," Giacomo said; Vermont's chapter was the first in the United States. This winter, Trenchers received the Vermont chapter's Snail of Approval, a way of recognizing businesses that represent Slow Food's values of "good, clean and fair food."

"[Trenchers is] kind of a newbie on the Vermont scene," said Slow Food Vermont board member Suzanne Tremblay, who spearheads the Snail of Approval committee. "But we were very impressed with how they are able to use local products to create a Vermont taste coming from an Italian tradition." 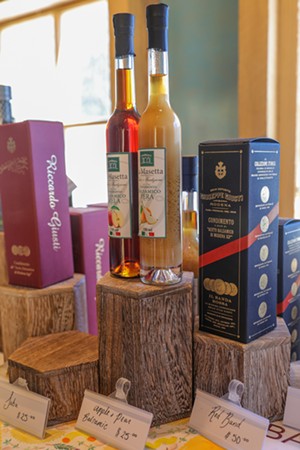 The couple sources anything they can't grow — such as spices, chocolate, coffee and sugar — from single farms, several of which they've developed direct relationships with over the years. In 2019, they trekked eight hours through the Amazonian jungle in Ecuador to visit the husband-and-wife chocolate producers with whom they work, who are also Slow Food members.

The Vascottos moved their operations into a production kitchen on the property halfway through the 2021 season. With both production and storage capacities, the kitchen allowed them to expand to wholesale production and hire their team. Trenchers landed 16 accounts in the first two months, including Libbey's Meat Market in Lyndonville, the Roots Farm Market in Middlesex, Edelweiss Mountain Deli in Stowe and the Burlington-based Intervale Food Hub.

Despite Trenchers' growth, the Vascottos are committed to the direct relationships they've built locally and around the globe, combining flavors and ingredients to stock their gastronomia.

"It's not the basic stuff you will find at a normal grocery store," Giacomo said of their pasta. "It can be intimidating." He and Jennifer are quick to offer recipe ideas and cooking advice, or to tell the story behind each pasta shape.

"Our line at the market gets pretty long," Jennifer said with a laugh. "The Italian tradition really makes food so personal."