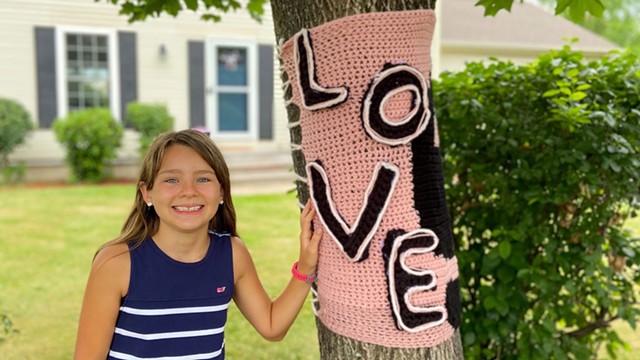 In 2013, London Kaye was working at an Apple store in New York City, feeling unfulfilled in her job. So, in search of a creative outlet, she wrapped a tree outside of her apartment in a scarf she had made. She didn't think it would last long.

"But it stayed up," Kaye said, "and a neighbor of mine stopped me and said, 'Me and my granddaughter stop at your tree every morning, and it just makes our day.' So I was like, Oh, my goodness, I've got to do more."

That interest in "yarn bombing" has turned into a full-fledged career for Kaye, who is based in Los Angeles. She now leads an organization called Love Across the USA that creates crocheted "large-scale community murals celebrating great American women," Kaye said. The most recent piece went up in March in Washington, D.C., and depicts Vice President Kamala Harris.

A post shared by Love Across The USA (@loveacrosstheusa)

For Pride Month in June, Kaye created a free crochet pattern so people across the country could make "love" wraps to put around trees. She wanted to hit all 50 states, so the org sent two finished pieces to Vermont. Phoebe Zorn, operations coordinator for the Pride Center of Vermont, put one around a tree outside the center's Burlington offices, while Greta D'Agostino put another on a maple tree in her Williston yard.

The piece, made of pink, black and white yarn, is eye-catching, according to D'Agostino, who put it up with her daughter, Daniella. She and her husband saw it as a teaching moment for their two kids.

"We want to raise our children in a world where they know that whoever they are, they are worthy of love," D'Agostino said. "We want them to go out into the world and spread that message."

Though Pride Month is over, D'Agostino has no plans to take the wrap down anytime soon.

"This message of love and community support is an all-the-time thing," D'Agostino said, "and so I hope others will be inspired to spread messages like this year-round to show their support publicly."