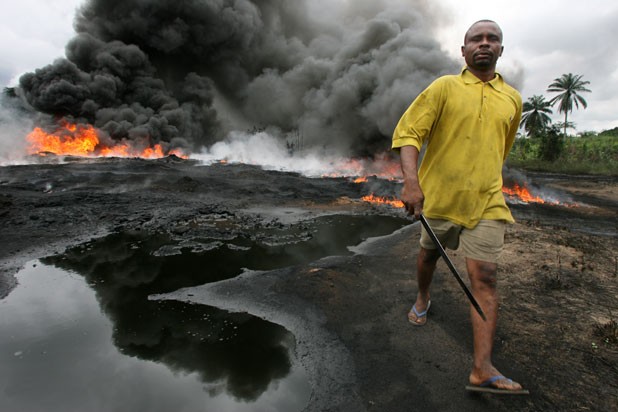 An African farmer in a dirty yellow shirt is clutching a machete as he strides toward us — and he does not look happy. Behind him, oil-drenched fields are aflame in a hellfire scene of smoke billowing above a blackened moonscape.

“Oil Spill Near Farm Land Ogoni,” by former Associated Press photographer George Osodi, might be the signature image of an exhibit of contemporary African artwork now on view at the Middlebury College Museum of Art. This isn’t so much an art show as it is a visual outburst of rage and despair.

What confronts us in “Environment and Object: Recent African Art” is the inverse of Africa as conceived in the Western, romantic imagination. Instead of gazelles bounding across the savannah, we’re given squalid streets and abandoned railyards. Snow-capped Kilimanjaro doesn’t make an appearance here, but there is a trash mountain about to be explored by a teenage scavenger.

About half of the 50 sculptures, wall hangings, photographs and paintings depict extreme degradation of Africans and their surroundings. The creators of these pieces serve up their subjects raw, although there’s still beauty of sorts to be found in the suppurating wounds.

The rest of the works make inventive reuse of what are generically termed “found objects” but which here can more accurately be referred to as garbage. A couple of the artists even manage to respond whimsically or with mordant humor to their environment’s ubiquitous detritus.

Osodi’s oddly elegant compositions of exploding oil wells are among several works by Nigerian artists that focus on the destruction of the Niger River Delta by Shell, BP and other conglomerates. Yinka Shonibare, for example, places discs of colorful traditional textiles on a wall-size expanse of canvas that’s spattered with a glob of black acrylic paint. Jerry Buhari also uses black acrylic to suggest an oil spill. His “In the Pipeline” could pass for an abstract-expressionist painting if it weren’t for its title and the context of the show.

Corrupt or inept governments are complicit in this rape, as Barthélémy Toguo, from Cameroon, makes clear in a his life-size, staged photographs. “Afrika Oil?” shows a man, head back and guzzling from a plastic bottle, wedged inside a white barrel on which “Afrika Oil?” has been painted in red. In “Stupid African President 2,” a figure wears a white jumpsuit festooned with red telephone cord as he balances a chainsaw on his bald head. Another stupid president, dapper in a bespoke pin-striped suit, stands at a microphone in front of a map of Africa in “Stupid African President 1.” This one is no clown; he means business.

The single most shocking piece in a decidedly unsubtle show is “Teasing Suicide” by Sokari Douglas Camp, one of Africa’s best-known female artists. She’s welded a stand-alone steel sculpture of a woman with a Kalashnikov rifle stuck in her mouth. The figure’s head, neck and shoulders are spray-painted bright pink, as if she’s already pulled the trigger.

Camp is depicting a member of an armed group that’s fighting the oil companies in the Niger Delta. The militants are demanding a fair local share of the national wealth that’s been plundered by government officials. Is the artist suggesting that her subject is a martyr sacrificing herself for the cause? Or is Camp implying that the resistance movement is self-destructive? Maybe it’s both.

Congolese artist Chéri Samba, who works in the “popular painting” tradition, provides a much-needed light touch in “Lutte contre les moustiques.” There’s nothing funny about the subject — efforts to eradicate malaria — but Samba still manages to make viewers smile with his cartoonish painting of a man with a slingshot and a woman with a bow and arrow (and electrified dreadlocks) taking aim at mosquitoes on their bedroom walls. “Cherie,” the crouching man instructs the woman, “you kill those on the right while I battle the leftists.” The grimacing archer replies, “I’m doing it, my love. I’ve already killed two, but they seem to resuscitate themselves.”

Brilliant in their simple shape-shifts are the masks that Romuald Hazoumé has fashioned from discarded plastic gasoline cans and cellphones. They’re immediately identifiable as African in their artistic lineage, even though the Beninois artist relies on cast-off items manufactured in the West.

El Anatsui, a Ghanaian who’s emerged as an international art star, contributes the most conventionally beautiful piece in the show, “Some Still Come Back.” It’s made of unconventional material — hundreds of beer-bottle caps strung together with copper wire — and forms a multicolored metallic tapestry that seems to undulate on the museum’s wall. That’s not all: Anatsui has made the piece resemble traditional kente cloth.

Nnenna Okore has achieved something similar by knotting white plastic bags into a net-like hanging. There’s defiance behind the beauty of both these works, because, as Anatsui says, they repurpose objects “the environment has thrown up.” Rather than responding passively to an enveloping ugliness, African artists are twisting it into works of political anger and aesthetic splendor.