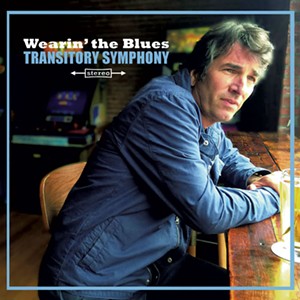 I think Jim Heltz is taking the piss, as the English would say. The local songwriter, along with his frequent collaborator and producer Tom Haney, has put out another Transitory Symphony record. Wearin' the Blues is the duo's third effort, and, like its predecessors, it defies any simple description, vacillating between genres as well as levels of seriousness.

It all starts rather stupidly. "Ben & Jerry Live in My Hometown" finds Heltz sardonically repping his town over a mild acoustic rocker. After name-checking the famous ice cream kings, he goes on to drop Ryan Miller of the band Guster — who also apparently lives in Heltz's hometown — and super-dead Vermont governor Thomas Chittenden.

Contrasting the duo to his own "underground celebrity," Heltz's tongue is planted firmly in cheek. Depending on one's mood, this song and others like it throughout the album waver between being funny and just sounding like a drunk dude making up ditties at a party for the fuck of it.

"Bad Voodoo" takes a turn into more gothic territory, with Heltz's voice sounding like a cross between Leonard Cohen and Bauhaus' Peter Murphy. The organ swirling in the background is a lovely, genre-specific touch that adds just the hint of dread the song needs.

Despite Transitory Symphony's continual slips into whimsy and humor, it does seem like Heltz is earnestly attempting his version of a blues record. The band doesn't dart all over the style spectrum to the degree it did on 2016's The Human Condition. And a thematic thread runs through the songs, most of which are about love, life and loss getting you down. Even when Haney or Heltz's brother Patrick takes lead vocals, the tone of the record remains true to its purpose.

Whether by accident or design, Haney sings the more country-influenced tunes. "What They Mean" possesses a brokenhearted tenderness, both in the composition and vocal work that floats atop a bed of acoustic guitar. "Oh, is this what they mean by the game of love? / Is this what they were thinking of? / I hope it's not what they were thinking of," Haney sings, sounding like a man battered by miscommunication. It's a lovely and highly unguarded moment of songwriting.

This quality makes the return to jokey material on the title track even more jarring. The conceit is again broken hearts, but either the song was written long after any emotional pain remained, or Heltz just chooses to deal with it by employing high levels of snarky disdain. "Now I'm rolling up my sleeves like real men do," he sings. "But instead of wearing my heart ... I'm wearin' the blues." Taking the piss indeed.

(This might be a good time to note the album's cover, which features a brooding Heltz clad in — wait for it — blue jeans and a blue jacket.)

There's not a lot of flow to the record, but Transitory Symphony make up for it with some rewarding turns, particularly toward the album's end. They go full Velvet Underground for "Emotional Ether," which has a delicate simplicity, like an uplifting dirge of sorts.

As with some local releases, the production has its limitations. While Haney does plenty of good work, especially on Heltz's vocals, the percussion is mixed so far in the back — and occasionally stays in time just by the skin of its teeth — that it can be a distraction. At times, that mix lends an avant-garde bent to the arrangements that can be edgy. But at others, as on "Bakery Girl," it can all but upend the tune.

Wearin' the Blues is an erratic document, replete with bravery, mistakes, very cool songs, not-so-cool songs and, above all else, a fierce strain of originality. Give it a listen at transitorysymphony.bandcamp.com.