Transforming the Moran, Again, With Art

For just two days last summer, the Burlington curatorial initiative Overnight Projects made its debut with a number of installations in the building that once housed St. Joseph's Orphan Asylum. For many locals, this exhibition offered the first — and only — chance to see and learn about a particularly storied institution in Vermont history. Now, one year and several equally fleeting exhibitions later, Overnight Projects has launched its most ambitious endeavor to date: a monthlong occupation of the Moran Plant.

"Modes of Conduction" features site-specific installations — assembled and installed in nine days — by Germany-based artists Vesko Goesel, Peter Miller and Viktoria Strecker. Artists Sarah O Donnell and Abbey Meaker, the curators and founders of Overnight Projects, write in their exhibition statement that the goal of the show is to "reactivate the machine that is Moran."

The hope to reinvent the defunct power plant is, of course, shared by the members of the redevelopment nonprofit New Moran. Project leaders Tad Cooke, Erick Crockenberg and Charlie Tipper, as well as creative directors Christopher Norris and Jasmine Parsia, jointly reached out to O Donnell and Meaker this past spring about an artistic collaboration. The pair in turn contacted Burlington-born Miller, who suggested working along with Goesel and Strecker.

What the team came up with is an ode to the creative potential of Burlington's beleaguered relic. Whether it will be a swan song remains to be determined; on July 21, Mayor Miro Weinberger announced the termination of New Moran's memorandum of understanding because the latter had failed to meet a fundraising deadline for its proposed renovations. The group now has until November 11 to submit a financially viable plan; failing that, the city has stated, it will demolish the structure.

Cooke remains optimistic. "['Modes of Conduction'] really expanded our understanding of the building's potential as a venue for contemporary art," he said during a recent exhibition tour.

Miller noted in his artist talk at the BCA Center that during his youth in Burlington, the Moran and the surrounding waterfront area were like the city's underground — a place where your parents wouldn't come looking for you.

In this return to his old stomping grounds, Miller came bearing an assortment of visual technologies new and old. His works, he claims, "are preoccupied with magic and generally investigate the phenomena of the cinema and its constituent, irreducible elements: lens, light, flicker, audience, projection, etc." Most of Miller's work is installed on the Moran's bottom floor, where dark chambers vaguely mimic the theaters of a dingy cinema.

"8 Channel" presents eight box fans arranged in front of eight ordinary color televisions, all on loan from ReSOURCE. What first appears to be fan blades whirring before silent static is revealed to be an illusion — the fans are, in fact, moving too quickly to be visible to the human eye. Only snowy static appears on the televisions. But distorted "beautiful psychedelic flowers," as Miller calls them, result from the interplay of the pairs of machines. Science or magic, take your pick.

This evocation of the relationships between light, mysterious animating forces and simple or obsolete technologies is carried through in "Miller Apparatus." The work's title refers not just to the artist but to Stanley Miller, the 20th-century scientist who demonstrated how organic life forms could evolve from inorganic matter. Here, Miller (the artist) has placed tea lights on the surface of an old-school overhead projector, which remains off. The mirror reflects the candles' flickering onto a gallery pedestal, casting a cluster of wobbling light circles that resembles a cell undergoing mitosis. 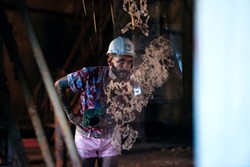 Fire is an important tool for Strecker, as well. In "Coded Scroll," she has painstakingly burnt delicate, swirling abstract forms into a player-piano roll. The entire sheet of paper cascades down a rusting moveable staircase adjacent to a wall. Upstairs, in a room housing Moran's massive metal coils, we see how Strecker has burned similar forms into another, much smaller and more modern kind of scroll: receipt paper. The tabletop-size, framed works perch randomly on the protruding coils.

The artist describes her driving interest as a study of, and search for, universal forms, and she adroitly transfers her obsession between mediums. The intricate marks Strecker burned into her paper works reappear — drawn with white marker — on thin plastic transparencies suspended from the basement ceiling. These look like ghostly smoke puffs. The medium-scale works hang in clusters arranged in a straight line, but numerous potential composite images are possible. The transparent surfaces allow the drawings to interact with one another through layering, and their shapes shift as the viewer moves to different vantage points. This interest in layered perspectives carries over into Strecker's general observation about the exhibition: "You will find angles where you have a collage image of several works."

Continuing in the vein of "Coded Scroll," Strecker's "Gambler II" and "Cycle/Drain" offer sonic as well as material manipulation. In an open-on-three-sides first-floor chamber, she has constructed an approximately four-foot-tall assemblage by shattering sheets of Plexiglas and then fusing the pieces back together with sharp, jutting angles. At the structure's base is a small pool of water. This funnels slowly through a drain to the basement below, where Strecker has strung a long, spiderweb-like length of plastic wrap — "Cycle/Drain." The water drips onto the plastic, and the building's acoustics amplify the semi-regular rhythm of the impromptu instrument.

The other two artists reference musical instruments, as well. Near "Cycle/Drain," Miller has placed a rapidly ticking metronome. Upstairs, Goesel has installed a sunburst of taut threads that look as if they could be played like a harp.

While Miller and Strecker work with tight precision, Goesel's works have a lighter and more fluid feel. His four large-scale sculptures occupy the plant's central open chamber and are constantly in flux at the whims of changing light and wind. Each piece is made from shiny lamé whose threads incorporate actual silver. The largest of these is "LFS 333 silver," a suspended disc that measures approximately 13 feet across. Another, "LFS silver stairs," hangs in tiers, looking like a floating, gently undulating staircase to nowhere.

Goesel describes these works as "passive sculptures" inspired by his interest in the tools and mechanisms of photography — in this case, the reflecting fabric used by professional photographers to manipulate light. In this sense, he has transformed the Moran into a massive photography studio with no designated subjects. During his artist talk, Goesel noted, "[I work] in between or around photography — I wouldn't say I'm working about it."

The works of these three artists function uncannily well together. Each maintains a distinct style and individual preoccupations, though Goesel and Strecker make more use of recurring elements of the building's architecture. Collectively, the artists have created a nondidactic meditation on light and energy, technology and the passage of time.

The show is not static; during their tenure in Burlington, Goesel, Miller and Strecker continue to make tweaks and additions. The final pieces will be revealed at the exhibition's closing reception on August 28.