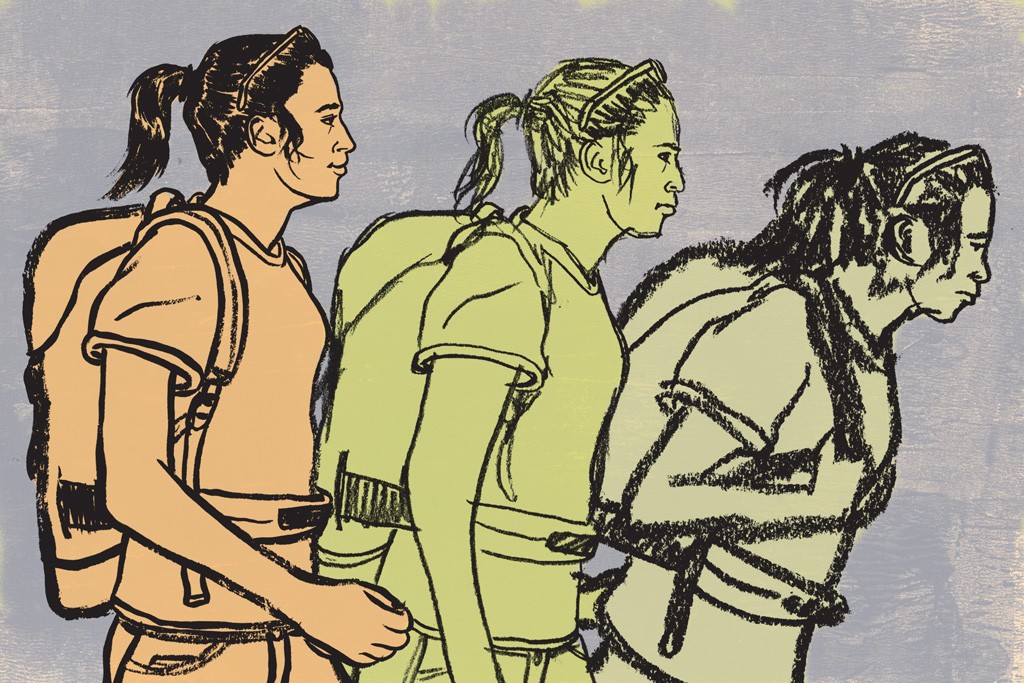 If insanity is doing the same thing over and over again and expecting different results, what happens when you lope an infinite loop through the woods of Goshen in a new trail race that requires up to 10 days to complete?

That's what I wondered when I (apparently already insane) signed up for the Infinitus, a brand-new "extremely rugged" foot race organized by the exclusive, membership-only Endurance Society. Even the sign-up process was loony: Instead of a website with photos of smiling marathoners and promises of medals and post-race refreshments, I found a black homepage with a grainy, black-and-white video of wilderness runners and odd, percussive music. "8k, 88k, 888k" read the white type, with a link to the registration page on Eventbrite. It made me think of Edgar Allan Poe's "The Raven": "Darkness there and nothing more."

I had joined the Endurance Society shortly after Pittsfield cofounder Andy Weinberg, who also helped establish the Death Race and Spartan series, extended an invite last fall. I was intrigued by the promise of "unique, life-changing and mind-blowing experiences for adventure enthusiasts," as the website put it. I also liked the idea of benefiting local nonprofits by entering these wacky events with Latin names.

"Our plan was to have a secret society for endurance athletes," said Weinberg of the Latin touch. That secrecy has fallen by the wayside, however: All Endurance Society events are now open to those who pay the $15 membership fee.

So I paid, and perused my choices. The Extremus Winter Trek or the Frigus Ski, Snowshoe and Sled Run: too cold. The Sine nomine (without name) in late June: too hot, too creepy-looking on the promotional video — and it starts at 1 a.m. But the Infinitus, a trail race just down the road in the climate-comfortable month of May, seemed just right.

With the date advancing, I reached out recently to other Infinitus racers to see what drew them in and how they're training.

A cocktail of painkillers inspired Rebecca Hansen to sign up for the Infinitus. So I learned when I began comparing training notes with some of the 200 or so registrants. When Hansen heard about the 888K, the 53-year-old native of Naples, Fla., was recovering from surgery on an arm she'd broken a few miles into a 118-mile race around Florida's Lake Okeechobee. "I signed up," she wrote in an email in late April. "When I was no longer on drugs and came to my senses, I realized what I'd done."

With only a few weeks to go until the 888K, Hansen is taking her setback in stride, walking with a weight vest to become accustomed to the food and drink she'll have to carry on her back for the 10-day trial. "I have my work cut out for me next month!" she wrote.

Sharing a similarly cavalier attitude toward the 888K is New Hampshire's Kale Poland, 32, a spinning teacher and bike shop employee. "I don't consider myself someone who trains," he said. "It's all incorporated into my lifestyle — training is for the A-type personalities." (Then again, last year the guy won the Peak 500, another race organized by Weinberg in Pittsfield, and he has completed a deca-Iron, or 10 back-to-back Ironman competitions, so he has some street cred for this trail race.)

On the flip side is Jennefer Eaton of Fair Haven. She's been training for the far shorter 8K at the obstacle-course proving ground of Shale Hill in nearby Benson, working out at Fair Haven Fitness and running up to six days a week. Even so, Eaton said, "I'm not in this game to win. My goal will be to push as hard as I can the entire time, not letting up until I cross the finish line. There's some elevation to work with," she added.

Elevation is an understatement for the Infinitus, a figure-eight loop that Weinberg described as "the toughest course possible" for the Blueberry Hill area. The 88K — my chosen race — has seven "significant" climbs, including Romance Mountain, Bloodroot Mountain and Mount Carmel. Runners will be on mixed terrain — singletrack, snowmobile trails and logging roads.

Williston's John LaCroix, who has tackled several 50- and 100-mile races, maintains realistic expectations toward the 88K. "The terrain won't allow me to move as fast as a 'normal' 50-miler would," he said. LaCroix has been running an average of 65 miles a week in preparation for the event, along with hiking and TRX suspension training. "Andy's races are guaranteed to be challenging and tough," he said.

As for me, I began training for the 88K by logging mile after miserable mile on the treadmill this past winter — clearly the wrong approach.

"Hill work and lots of hiking" is Weinberg's recommendation for the Infinitus. "Speed isn't important in this type of event, but it's crucial that your body is strong and that you're able to hike uphill efficiently and at a reasonable pace," he said. "Ultramarathon training obviously requires a great deal of endurance, and it's important to log some long miles, but it's equally important to hike, especially training for an ultra like this."

Back in March, logging long miles was my only focus, and I lost sight of why I moved to Vermont and loved running: to be outside. Day after day, I hit that damn Cybex machine until my brain and body could no longer take it. I began suffering from overtraining syndrome, feeling lightheaded and dizzy during massive blood-sugar drops, and even more irritable than usual.

Then a well-timed business trip to Hawaii opened me back up to the outdoors. The sunshine, the mai tais and the meditation sessions restored some of my sanity. I realized that, until I was able to rest and recover thoroughly, I needed to reevaluate my decision to tackle the 88K distance.

Turned out, Weinberg had added two more distances to muddle my decision-making process: a 48-hour and a 72-hour option. "There's no set distance, simply time," he said. "The clock starts and the race goes for either 48 or 72."

But it also turns out that May 30 is the day of my daughter's big gymnastics show, so I'm sticking with the 8K. I'll save my crazies for cheering on an 8-year-old doing her roundoffs, again and again.

Runs in the Sun

Not all footraces require "ultra" training, though anyone who's been psyching up body and mind for the Vermont City Marathon may have doubts about that. But some races are closer to fun and require a more reasonable level of fitness. The best thing? They're all outdoors. Here are six to get you through the summer.

Vermont City Marathon, May 24: It's the 27th year of this 26.2-mile effort, which allows runners to divide and conquer the distance as a relay team or battle the Burlington course solo. vermontcitymarathon.org

Colchester Causeway 5K/15K, June 6: Celebrate the newly reconstructed span between Colchester and Grand Isle by racing across; it's the closest you'll come to walking on water. colchestervt.gov

Stowe 8-Miler, July 12: For athletes interested in the post-run treats of Smuttynose Brewing and Island Homemade ice cream (along with a dip in the West Branch River), this popular race — now with a 5K added — is the pick. locorunning.com/stowe8miler

Mad Marathon, July 12: Organizers bill this event as the "World's Most Beautiful Marathon," and many Vermonters would agree. The course winds through Waitsfield, Warren and Fayston with a killer elevation. There are half and relay options, too. madmarathon.com

Kingdom Run, August 8: 5K, 10K or half marathon? All runners are rewarded with a top-notch tour of the Northeast Kingdom — not to mention blueberry sundaes afterward. kingdomrun.org

Archie Post 5-Miler, August 30: The dog days of August near their end with Vermont's oldest race, which follows the bike paths and cinder trails of South Burlington. gmaa.net

The original print version of this article was headlined "Crazy Eights"