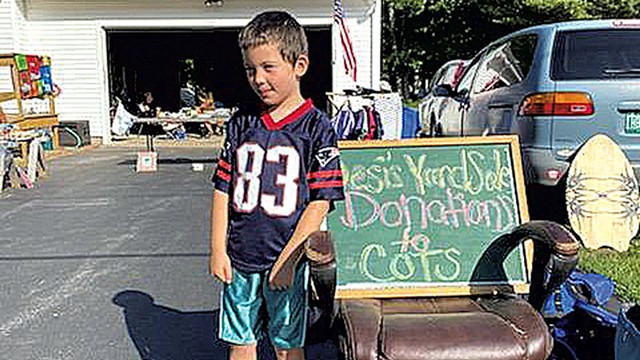 Mary Hong and her 7-year-old son Desi were driving through Burlington's Old North End earlier this month when the boy spotted a man holding a sign that read, "Homeless, anything helps."

Desi wanted to give the man his snacks, he recalled during an interview last week, but his mom had a better idea: What about raising money to donate to an organization that helps the homeless?

Desi settled on a yard sale featuring many of his old toys and some household items. His mother suggested they donate any proceeds to the Burlington-based Committee on Temporary Shelter, which offers services for the homeless, including families.

So Desi and his mom and dad gathered the older toys — "trucks, dinosaurs, a backpack," Desi said — at their Hinesburg home and hauled them up to Desi's grandmother's house in Colchester. During a two-day sale on June 19 and 20, they brought in a grand total of $473.51. Among those who stopped by was a man who recounted the time he'd been homeless, Mary said.

The experience has inspired Desi, who says that when he's older, he wants "to be a builder and build houses for homeless people.

"Because, well, homeless people — they're homeless," Desi explained. "They might have a few bucks, but not enough to buy a home."

After Desi donated the cash to COTS, the organization invited him to come by for a tour once COVID-19 restrictions are loosened. Becky Holt, COTS' development and communications director, also offered to arrange for him to talk to folks from Habitat for Humanity, an organization that builds homes for families in need.

Desi said this could be just the first sale.

"I need to do it again," he said. "Because Mom forgot to bring some toys."