Town Takes College Dollars - But Maybe Not Its Student Revelers 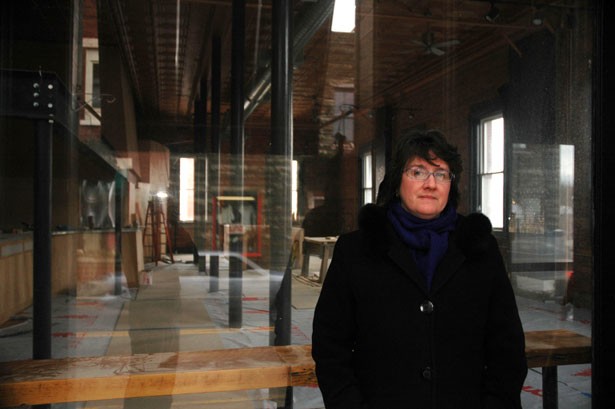 Four months after taking over the lease at the former Eat Good Food Grill, Bar and Deli restaurant at 51 Main Street, Middlebury College has yet to set an opening date for a planned student-oriented venue that is still searching for an identity.

College officials suggested their original vision for a bar probably won't materialize for two reasons: concerns about student drinking, and opposition by some local food-and-booze establishments to what they consider unfair competition from a wealthy nonprofit entity.

"The most important message we've given [college administrators] is the need to be cautious in how they impact existing businesses," says Gail Freidin, director of a downtown merchants' group. "We've also said that utilizing the space during the day as well as at night would be more beneficial to the business community as a whole."

Middlebury College spokesman Mike McKenna said the school wants 51 Main to be a "win-win" proposition for everyone involved. Students, college officials, retailers and restaurateurs are indeed struggling to strike a delicate balance with the 3500-square-foot location, which overlooks the Otter Creek.

Meanwhile, with an endowment approaching the $1 billion mark, Middlebury College is making unprecedented financial commitments to the local community. In recent months, the school has announced $12 million in gifts and investments earmarked for enhancement of town institutions and infrastructure.

The school will contribute $1 million over the next 20 years to the Town Hall Theater on the Middlebury Green, under the terms of a partnership formed last year. That's in addition to the college's previous gifts of $250,000 toward the $5 million cost of refurbishing the 19th-century building. The agreement enables Middlebury students to work with local thespians, while making college productions more accessible to townsfolk.

Another $9 million pledge will fund a second crossing over the Otter Creek, a project first proposed more than 50 years ago as a way to decongest the car-clogged downtown. Many see an urgent need for the second span in the wake of last fall's train wreck, which closed the existing in-town bridge and restricted access to Porter Hospital. The college's donation will take the form of payments over 30 years to cover the principal and interest on bonds to be floated by the town.

The trifecta of largesse was completed last month, when Middlebury College purchased the Old Stone Mill for $2.1 million. Situated beside the Frog Hollow Vermont State Craft Center, the 168-year-old building will undergo interior remodeling to provide studio space for students as well as a gallery open to the public. The Old Stone Mill will also remain on the town's tax rolls.

The confluence of three big deals during the debate over 51 Main Street is "more coincidental than intentional," McKenna said. Each of the projects qualifies as integral to the college's mission, he continued.

But McKenna also attributed the college's elevated profile to the long-standing community involvement of Middlebury College President Ronald Liebowitz, who has been living in the town since 1984. McKenna said Liebowitz wants the school to play a larger role in the town's affairs, though he acknowledges that engagement will draw criticism. "There's always a sensitivity to not appear overbearing and at the same time not to appear too distant," McKennna explains. "So we figured we might as well just move ahead."

Indeed, not everyone is pleased with every aspect of the college's relations with the community. And much of that displeasure has to do with 51 Main Street.

John Melanson, owner of Carol's Hungry Mind Café, just around the corner from 51 Main, said a college-leased space would pose a greater threat to his business than did plans for a Starbucks in The Centre shopping plaza on U.S. Route 7, about a quarter-mile away.

The developers withdrew that proposal last month, perhaps reflecting a scale-down of the coffee chain's worldwide ambitions. Local opposition was also intense, though, with several area residents denouncing Starbucks at a Middlebury Development Review Board meeting in December.

Melanson said he asked Middlebury College to buy his coffee bar on the town green rather than open a café of its own at 51 Main. According to him, the school declined the offer and has yet to respond to a subsequent proposal to sponsor after-dark programming at Carol's Hungry Mind. Melanson reported that he has been trying to swing a deal with the college because his espresso joint's financial status remains "extremely tenuous."

Melanson said he's been losing money since Carol's opened in mid-2005, although he's encouraged by a recent surge in business in response to rumors that the café was on the verge of closing. "The town has really rallied," Melanson says. "This has been the best winter I've had here so far."

Doug Lazarus, impresario of the Great Falls Gallery, a downtown gallery and performance space, wishes the college were doing more for local institutions. Lazarus recently relocated his gallery to a much smaller space on Main Street because its original quarters overlooking the Otter Creek waterfall are undergoing renovation.

Lazarus said he asked the college to let the Great Falls Gallery move into 51 Main and allow local artists to collaborate with Middlebury students. "We thought it was a great idea," Lazarus said, "but they weren't interested."