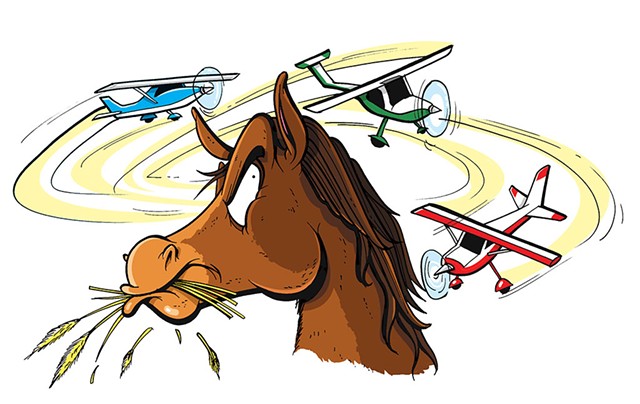 The Town of Lincoln's Zoning Board of Adjustment has reached a verdict on Beta Technologies founder Kyle Clark's controversial proposal for a private airstrip at his home: Nope.

The 7-1 decision, issued on Thursday, marked the conclusion of a four-month hearing process that began this spring. That's when Marilyn Ganahl, whose property borders Clark's, appealed the Lincoln zoning administrator's decision to grant Clark a permit to turn a 1,500-by-60-foot swath of field on his land into a private runway. Ganahl, who keeps rescue horses on her farm, was concerned that low-flying aircraft would disturb her animals and reduce property values.

Clark countered that his primary aircraft, a Pipistrel Alpha Electro, had a "nearly silent noise profile" and would cause minimal disruption to neighbors.

A Proposed Private Runway for Beta Founder Kyle Clark Creates Turbulence in Lincoln
By Chelsea Edgar
News
In the end, according to the 20-page ruling, the decision hinged upon "whether airplane landing strips are customarily incidental to single-family homes."


Ganahl's lawyers, Claudine Safar and Christian Chorba, argued that the term "incidental" implied that the proposed use should be of "minor consequence" to abutters. Attorney John Mazzuchi, who represented Clark, urged the board to consider "a more fluid concept of what can be considered an 'accessory use' which evolves over time to accommodate the changing needs and modernized methods of commuting and travel by residential occupants."

Through a Beta spokesperson, Clark declined to comment on the ruling; his attorney did not immediately respond to an interview request. Reached by phone on Friday afternoon, Safar said her client was "pleased with the decision."

Read the complete decision below: