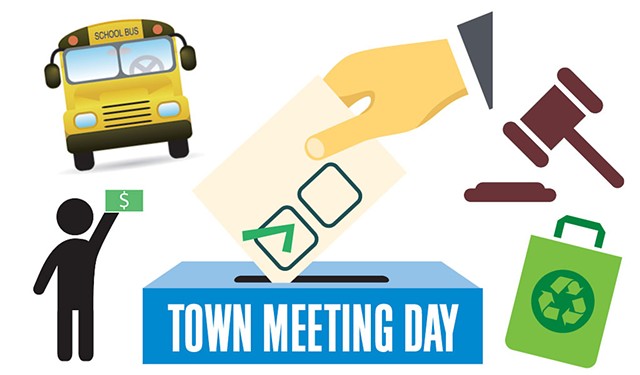 Next Tuesday, Vermonters across the state will tromp into voting booths and congregate in school gyms and community auditoriums. Citizens of all stripes will vote to elect library commissioners and town moderators and hash out whether to replace the 30-year-old road grader.

Vermonters know what to expect on Town Meeting Day, the state's own version of pure, unadulterated democracy. It's a public forum to air grievances about everything from snowplows to global warming. Small children run underfoot while their parents vote on issues using paper plates attached to popsicle sticks.

For those who make it through to the end, there's a potluck.

Agendas for the annual assembly can be a grab bag of the outlandish and the unexpected, the well-meaning and mundane. Here are seven issues that Vermonters will grapple with on March 7.

Last year, Utah developer David Hall announced a plan to establish a sustainable community of 20,000 people on 5,000 acres near the central Vermont birthplace of Mormon prophet Joseph Smith. Now residents of Royalton, Tunbridge, Sharon and Strafford — the proposed home of the futuristic scheme — want to stop it.

"Shall the voters in the Town of ____ oppose the NewVistas development?" reads the measure before citizens of all four towns.

The Alliance for Vermont Communities, an organization founded to oppose the project, got the question on the ballots. In Royalton, a handful of volunteers rounded up 319 signatures on a petition — more than triple the required number, according to organization president Michael Sacca.

The advisory vote carries no actual clout. Still, "we would like to send a message to the governor, the legislature, David Hall and to the neighbors," Sacca said.

The vote comes a year after a librarian discovered Hall's plan as she perused land records in local towns. Hall now owns more than 1,200 acres in the four towns, according to Sacca.

The vote will "let people know how their town is feeling about this," Sacca said. "I haven't found one person who said this is a good idea."

School districting is on the minds — and the ballots — of many Vermont residents. Across the state, 57 towns are scheduled to vote on merging school districts as encouraged by Act 46. It'll be the largest single-day vote on the matter since passage of the law two years ago, according to Nicole Mace, executive director of the Vermont School Boards Association.

None of the 10 proposed unified supervisory unions is structured identically, and every discussion about them is thick with jargon and acronyms. There are proposed Regional Education Districts, side-by-side districts and, possibly, a Modified Unified Union School District, aka MUUSD.

In some districts, the vote may present no major changes for students. For others, it may mean school closures down the line. In one supervisory union in the Northeast Kingdom, the district would pay tuition for its students to attend other schools. At least one proposed district, Addison-Rutland, would have just one high school; others would have several.

The complexities of Act 46 may diminish the chances that voters approve the mergers, Mace said. While study committees around the state have largely embraced the redistricting efforts, many citizens are still lukewarm or remain unsure about the benefits, she said.

The results of the Town Meeting Day votes may determine whether or not the legislature grants towns more time to comply with the Act 46 redistricting rules; most mergers must get voter approval by July 1 of this year.

"If these votes don't pass on Town Meeting Day, I wouldn't take this as a signal that these communities won't move forward," Mace said. "These are hard conversations, and they take time."

In Colchester, one position may go the way of the fence viewer and pound keeper. The town is scheduled to vote on a charter change that would "eliminate the elected office of grand juror."

If you can't recite the responsibilities of a grand juror, you're in good company; even Colchester Town Clerk Karen Richard had to look it up in A Book of Opinions, by former governor Jim Douglas and Paul Gillies. The two served together for 12 years in the Vermont Secretary of State's Office.

Turns out, the grand juror serves as a combination policeman and tattletale, a one-man neighborhood watch elected to be "the eyes and the ears of the law," according to the book.

As noted in Vermont law, the grand juror "helps to prosecute criminal offenses that occur in the town by giving information to state and local law enforcement."

"It's a very antiquated position," Richard said. No one has been elected — or even run — for grand juror in Colchester for the past 30 years. There have been write-ins for the position, she said, but they've never garnered the 30 votes necessary to win the office.

"It's just not a position that is useful in our town," Richard said.

President Donald Trump's immigration initiatives have motivated some Vermont towns to counter with their own.

Plainfield, Hartland, Calais and East Montpelier are deciding whether to declare themselves sanctuary municipalities by refusing to cooperate with federal immigration authorities.

Jeff Bell, 74, spearheaded the Hartland action. "I became so mesmerized by the issues nationally," he said. He heard of other sanctuary cities around the country and worked with the town selectboard to draft the language of the article and collect the needed signatures.

Bell, a doctor, acknowledged that the measure holds little sway. He also noted that there are "extremely few" undocumented immigrants in Hartland. And, as it is, town administrators already are prohibited from contacting federal authorities about an individual's immigration status.

"Of course it's symbolic, but I think it's a crucial thing to be so," Bell said. "We really want to acknowledge our kindness and sensitivity to the needs of the stranger."

Montpelier, Winooski, Burlington and South Burlington are also considering sanctuary status, though none of those cities is making a decision about it on Town Meeting Day.

Ban the bag. That's what Tim Maciel wants to do in Brattleboro.

Maciel proposed an advisory measure that asks the selectboard to prohibit the "single-use" bags shoppers get for free in the supermarket checkout line.

A trip to visit family in San Jose, Calif., where a similar ban exists, inspired Maciel to act. "Everyone, including my 93-year-old mom, had adapted very easily," he said. Plastic bags have been a "bad idea from when they were first introduced" and "detrimental to the environment, to birdlife, to sea life."

Earlier this winter, Maciel gathered 400-plus signatures to get an advisory article on the ballot. Store managers at Hannaford and Price Chopper were both open to the idea, he said. The ballot item does not apply to the plastic bags used to contain produce.

Maciel said it's "very likely" that the board will pass the ordinance if voters approve it. The end goal, he said, is to get statewide legislation passed. Lawmakers in Montpelier recently proposed two similar bills.

As goes Burlington, so goes Montpelier? A measure on the Queen City ballot asks legislators to institute a $15-an-hour minimum wage. Statewide, it just went up to $10.

"We want to really show from a grassroots perspective what Burlington voters want," said Annie Wohland, lead organizer for Vermont's Fight for 15 movement. "For real statewide change to happen, it first needs to happen on a local level."

In late January, just before the Burlington City Council agreed to put the measure on the ballot, Wohland organized a rally on the front steps of city hall. About 25 city officials and nonprofit leaders attended and voiced their support. A livable wage is "not only good for a worker, it's good for a society," Democratic Councilor Joan Shannon, a sponsor of the resolution, told the crowd.

In her speech, Shannon quoted John F. Kennedy: "No business which depends for existence on paying less than living wages to its workers has any right to continue in this country."

At the council meeting, University of Vermont economist and council president Jane Knodell, a Progressive, highlighted the ballot item as an issue of racial equity. While 38 percent of white workers nationwide make less than $15 an hour, Knodell said, that number jumps to 59 percent for black workers.

Knodell reassured councilor Kurt Wright, a Republican, about the economics of the proposal. Its broad language means that Burlington voters won't determine the timeline for implementation. It's "deliberately very vague," she said. "We are leaving this to the wisdom of the legislature."

The overwhelming majority of Hartford's residents are white, but race has polarized a selectboard campaign in the town of 10,000.

The battle started in late January, when Hartford selectman Mike Morris emailed a racially charged cartoon to members of the all-white board and a columnist at the Valley News. It depicted the Obama family and former U.S. attorney general Eric Holder — all of whom are black — as the Beverly Hillbillies departing the White House. Morris said he sent the missive by accident.

The state's youngest selectboard member, 22-year-old Becca White, asked Morris to step down, noting that she could work with Morris but "could not forgive him." Morris did not resign. Instead, White's statement prompted a write-in challenge from Lannie Collins, a 50-year-old military vet. Both candidates are white.

"You need to have forgiveness before you can move forward in the collaborative manner," Collins told Seven Days. He accused White of using the emailed cartoon as "a way to gain more recognition and grandstanding." And he objects to the name White and other board members chose for the new Hartford Committee on Equity and Diversity. Collins prefers to call it a "human rights committee."

White, the board vice chair, said these are valuable community conversations. But she stands by her statements, calling the original email "completely inappropriate."

"I applaud him for stepping up and wanting to run," she said of Collins.

White added that the town faces other important issues, and she hoped the remaining days of the campaign would allow for discussion of some of those.

"There's been a lot of backlash," she said.