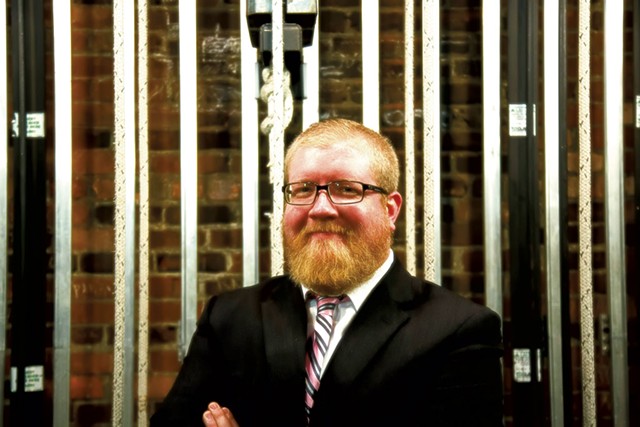 This August, Doug Anderson, founder of Middlebury's Town Hall Theater, will step down from his role as executive director after 10 years. Mark Bradley will take over the position. But Anderson isn't going far — just up the stairs from his current office to a newly created position as artistic director. As he put it, "I'm firing myself as executive director to find someone who can take [THT] to the next level. Running a business was something I was never trained to do."

Enter Bradley, who joins THT from Lebanon Opera House in New Hampshire. An artist himself, Bradley majored in clarinet performance at McGill University, a choice that he acknowledged "was a little esoteric" but reflected his love of music. After about five years of freelancing in Montréal as a musician and artistic promoter, he recalled, "It dawned on me that I found working with venues to be really exciting. The business side of arts is a challenge I really enjoy."

With this revelation in mind, he moved to Toronto to get his MBA, then, in 2016, to New England to take a position as assistant director of Lebanon Opera House and be closer to family.

Bringing in someone with Bradley's passion for the business side of theater has been a great relief, Anderson said. Though THT has been operational for 10 years, he and other members of the board spent the preceding decade working to establish the space.

Their initial capital campaign raised $5 million to renovate the dilapidated building, which was Middlebury's first town hall in 1883. Anderson recalled, "We had no idea how much work the place would need. Like, we thought we needed to reinforce the 100-year-old slate roof, but once we got up there, we realized if you even picked up a piece of slate it would disintegrate in your hand."

Fast-forward to today: THT is a thriving community space, hosting about 165 events a year, according to Anderson. That's more than 1,500 community events since the venue opened.

Not only does THT host 12 resident companies, ranging from theater and opera companies to choruses and filmmakers, but it also serves as a mixed-use space, by design. "I've always thought that a town needs a big room," Anderson said, "and we can't be precious about what happens in that room. We made the space as flexible as possible, so that in one weekend we could have a performance, a wedding and a Halloween party. It's been a key to our success, and the community has really embraced it."

Tasked with the labor-intensive project of stewarding the building and the organizational challenge of facilitating hundreds of venue rentals, Anderson needed to work 80-hour weeks if he wanted to direct big operas and musicals. About three years ago, he pitched his board the idea of hiring someone to help. "Luckily," he said, "I have a very committed, hands-on and proactive board who all immediately agreed that we should do this."

To fund the new position, THT used those three years to raise its endowment from $500,000 to $1.7 million, substantially offsetting the cost of Bradley's hire. Though tripling the endowment was a monumental task, Anderson said, "It was wonderful to go to donors and have a specific reason to raise the endowment, one that will ensure the longevity of this institution."

Anderson said THT will continue to increase its endowment to pay for the incidental costs of owning a historic building that is a perpetual fixer-upper. But he's glad to pass that duty on to Bradley. Asked whether he would miss any aspect of running the space, Anderson didn't hesitate before saying, "Not one thing. Walking out of that office and moving upstairs will be a very happy day for me."

Bradley is prepared to take on the challenge with enthusiasm. "I feel like everything I've been working on for the past 10 years has been training me for this job," he said.

He's particularly excited about managing THT's latest purchase, a local fixture called simply the Diner, adjacent to the THT property. According to Bradley, folks are buzzing about the fate of the little diner, which closed earlier this summer. "We have an obligation to make sure that [the Diner] is not shuttered up, and to respect its role as part of the downtown," he said. "So we'll have to sift through the various ideas to find one that makes sense for us and fits strategically with the growth pattern of THT."

Bradley also envisions making THT into more of a regional touring destination. "THT could take a greater role as a roadhouse in this little corner of New England, and for certain niche genres has the potential for being a fun touring spot," he said.

Bradley and Anderson spoke of each other with congenial respect, expressing excitement about curating THT's programming together. Anderson is particularly looking forward to creating a children's theater company — that is, theater made for children and performed by adults. "It'll be awesome to be able to do that kind of creative work during a standard work day, instead of from five to nine in the morning, and then seven to 10 at night," he said.

For his part, Bradley is eager to make new connections in Middlebury, where he'll move in a couple of weeks. "Doug has worked really hard with the board and other people in the community to build a foundation," he said. "Now I have to get closer to the community and figure out where THT can fit more of those needs."