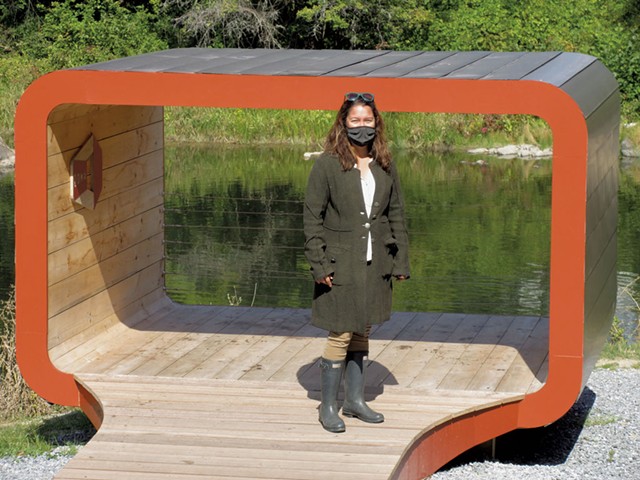 "Bring home a bridge!" urges a label on an architectural creation installed on the grass in Middlebury Riverfront Park. Called "Back to the Future Bridge," the beautifully crafted work resembles a small covered bridge with an interior built-in bench. It could be yours if you had, say, a brook in your yard and were willing to bid a minimum of $4,000.

Five such creations dot the downtown area as part of Bridges 20/20, an imaginative auction project from Middlebury's Town Hall Theater. Conceived in January by then-board members Lisa Mitchell and Andrea Landsberg (Mitchell became executive director in February), the project's aim is not just to raise funds for the theater but to drive business to Middlebury's downtown.

The latter has been besieged by a three-year construction project that reached a major milestone on September 21. The $71 million Bridge and Rail Project involved replacing two bridges, one on Main Street and one on Merchants Row, with a train tunnel that passes beneath the heart of the town — a staggering engineering feat. The last 10 weeks of construction were the worst: All traffic was banned from the downtown area while crews worked around the clock.

"Businesses were already bracing for this project when the pandemic happened," said Mitchell, who showed a reporter around the bridges up for auction. "COVID has been a double whammy." Until last week, for example, Middlebury College students were forbidden to leave campus.

Bridges 20/20 has been a success so far: Three bridges with confirmed buyers have been eliminated from bidding, and a fourth is nearly spoken for. Bidding on the fifth — "Back to the Future Bridge" — ends on October 10. Visitors can continue to see the bridges through October 16; a pleasant route recommended in flyers around town passes from the town green to Marble Works and (appropriately) across a footbridge to the edge of campus.

The builders of two creations, "Bridge-ette" and "Oona's Bridge," launched successful efforts to eliminate them from bidding after hearing positive feedback from locals.

"The overwhelming sentiment is that people wish [the bridges] could stay in the community," Mitchell said. 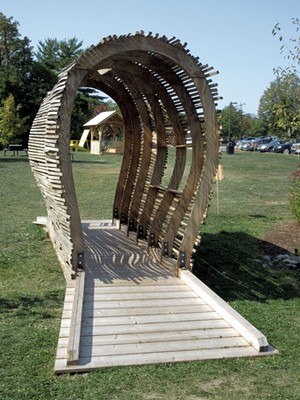 Responding to residents' enthusiasm, Vermont Integrated Architecture will donate the estimated value of "Bridge-ette" to Town Hall Theater to keep it in place. A project of VIA architects Ashar Nelson and Jesse Gillette, Lou Nop of Nop's Metalworks, and PC Construction in South Burlington, "Bridge-ette" takes the organic form of a tunnel made from thin, unevenly spaced horizontal branches covering arches shaped like whale's ribs. Traversing this passageway filled with barred light patterns, viewers can peek through cutout windows to gaze at Otter Creek Falls and a flower garden.

"Bridge-ette" will remain where it's sited in Riverfront Park, within view of VIA's offices in the Marble Works. It lies across the park from the aforementioned "Back to the Future Bridge," by Oakley Smith and Kevin McClain of Smith & McClain general contractors in Bristol and Will Wallace-Gusakov of Goosewing Timberworks in Lincoln.

The other town favorite, "Oona's Bridge," will become permanent thanks to a crowdfunding campaign by its builders. Created by Tim Steele, Drey Ward and Sean Flynn of Silver Maple Construction in New Haven, the structure was originally designed by Steele in 2016 as a child's fort for his daughter Una. Steele made two more over the following two years; one is now sited on the shore of Otter Creek beside the Stone Mill, an 1840 mill building and multiuse space that Silver Maple helped renovate in 2019.

"Oona's Bridge" is a mod little rounded-rectangular pad with red trim that's open on both ends. While children can walk right in, adults need to duck and sit. A pine ramp leads seamlessly to the pine-sheathed interior, and the exterior is weather-proofed with standing-seam metal roofing. A steel cable railing on the creek end permits safe views of the water, for which the whole structure serves as a frame.

In a phone interview, Steele said he drew inspiration from an angular tiny house called the Wee House that was featured in several magazines. The curves he added came from midcentury design.

"The challenge of the curves was fun; it's easy to build corners as a carpenter," Steele said. He learned carpentry at Silver Maple, which he joined 14 years ago, a year after its founding, but he hasn't had much time for personal projects. "That's my only fort," he joked.

Another bridge on display, "Bridge to the Outdoors," resembles a lean-to accessed by two steep ramps. Sited behind the college's Alexander Twilight Hall, the structure was designed and built by Jed Malcolm and his crew at Salamander Construction in Middlebury.

Children have found that "Bridge to the Outdoors" works well as a stage, Mitchell noted. Hoping to secure it, the Bridge School on Exchange Street launched a GoFundMe campaign for $3,000 and has raised more than a third of the amount from interested parents, according to Mitchell.

"I think it's likely [they'll get it]," she said. "Their philosophy is rooted in the outdoors, and they have a really good theater program."

The creation closest to Town Hall Theater is more like a poetic interpretation of a bridge. With "Terra Caelum," TruexCullins Architecture + Interior Design in Burlington aimed to "explode and deconstruct the facets of the traditional monolithic obelisk," according to its submission materials. The structure, made of precisely spaced stacked lumber, leads viewers into the heart of an unwound vertical spire-like form. The view from the bench at its center is solely of earth and sky — hence its title.

Art collectors Frank and Elaine Ittleman have offered to buy the sculptural creation for $1,500, so Mitchell has eliminated it from bidding. The couple will site "Terra Caelum" at their outdoor Lemon Fair Sculpture Park in Shoreham.

By phone, TruexCullins principal Rolf Kielman explained how "Terra Caelum" came about. His colleague, architect Josh Chafe, was the "main author," he noted, with assistance from himself, colleague and architect Keith Nelson, and builder Tom LeBoeuf of the Northeast Craftsmen group.

"We said, 'Imagine yourself in the green, where you can see all sorts of vertical towers and spires — the Congregational Church [of Middlebury], the Town Hall Theater itself,'" Kielman said. "Josh said, 'Let's make something that links the earth and the heavens.'"

The pattern of stacked wood, Kielman added, was inspired by stickering — the practice of air-drying stacked wood by leaving spaces between layers.

The firm crowdfunded the cost of materials — about $1,000 — and built the structure in Kielman's driveway.

In a normal year, Town Hall Theater would bring about 20,000 people to Middlebury, Mitchell said, who would then eat in restaurants and visit stores. Now down to three employees — herself, artistic director Doug Anderson and one facilities/maintenance worker — the theater has managed an outsize effort to attract visitors in an exceptionally precarious time.

Bridges 20/20 is on display around Middlebury through October 16. Pick up a map at local stores or in the Jackson Gallery, Town Hall Theater (open by appointment). townhalltheater.org