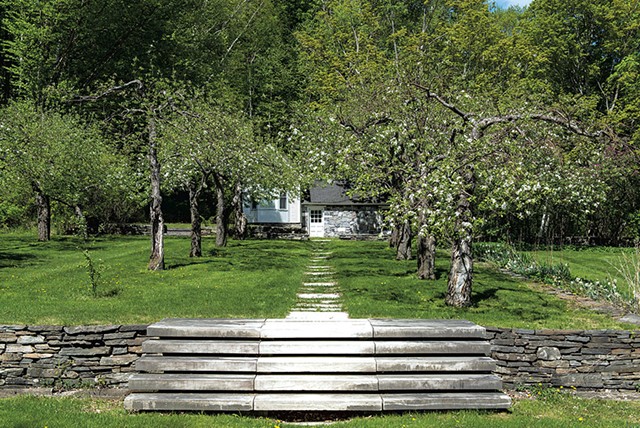 Vermont has been home to many a renowned creative soul, from Russian-born novelist Aleksandr Solzhenitsyn to playwright David Mamet to cartoonist Alison Bechdel. Less known, but beginning to gain the household-name recognition he deserves, is landscape architect Dan Kiley (1912-2004). For more than 50 years, Kiley lived and worked in Charlotte, where he designed some of the 20th century's most important and influential landscapes.

Modernist in character, Kiley's landscapes extended a building's aesthetic into sublimely structured outdoor experiences. At the Dallas office development Fountain Place, a grid of cypress trees in circular wells floats improbably on a plane of water bordering a mirrored high-rise. In Columbus, Ind., the Miller House's interior pattern of steel columns continues outside the floor-to-ceiling windows in allées of honey locust trees. The sweep of the Gateway Arch in St. Louis is reflected in the curved site walls and stairs of the Gateway Arch National Park, formerly known as the Jefferson National Expansion Memorial. 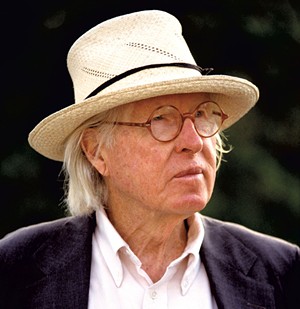 Before he closed his Vermont office, called East Farm, in 2003, Kiley and his partners designed some 1,300 built and unbuilt projects for sites around the country and in Canada, Europe and Japan. Five of his American sites have been designated National Historic Landmarks — the most of any landscape architect after Frederick Law Olmsted, the designer behind Central Park in New York City and, locally, Shelburne Farms.

"Dan was like the superstar living in your backyard," said Devin Colman, the state architectural historian, whose post is in the Vermont Division for Historic Preservation. "He could have practiced anywhere."

The legendary designer is honored in a traveling exhibition of photographs, "The Landscape Architecture Legacy of Dan Kiley," that opens at Middlebury's Henry Sheldon Museum of Vermont History on May 14. A full roster of events will accompany the summer-long exhibit, including panel discussions and talks by Kiley partners and employees, many of whom still live and practice in Vermont.

There will also be tours of the Kiley-designed Twin Farms resort grounds in Barnard and a book talk by Jane Amidon, who worked in Kiley's office and cowrote Dan Kiley: The Complete Works of America's Master Landscape Architect (1999) with him.

The exhibition is a project of the Cultural Landscape Foundation, a Washington, D.C., nonprofit dedicated to increasing the visibility and preservation of important landscapes. First shown in Boston in 2013, the exhibition has so far visited 18 venues around the country.

Foundation president and CEO Charles Birnbaum said during a phone call that the nonprofit had been inspired to take account of Kiley's legacy at the centennial of his birth, in 2012.

"We had this aha moment," recalled Birnbaum, when TCLF's office realized that the American Society of Landscape Architects' 2013 annual meeting would be in Boston, where Kiley was born, yet no recognition of his centennial seemed forthcoming. "We thought, We should be doing this celebration of one of its most influential practitioners."

Several notable photographers donated their time to shoot 28 of Kiley's most important sites. (The Vermont show has an add-on: a photo of Burlington's threatened Kiley landscape for architect Edward Larrabee Barnes' recently decommissioned Cathedral of the Immaculate Conception.) One of the photographers, Peter Vanderwarker, will visit in August to talk about the challenges of capturing landscapes in still photographs.

Though it's surprising that the show is only now coming to Kiley's longtime home state, it has taken Colman all this time to secure the arrangements. He explored numerous venues for the exhibition before landing the Sheldon on a suggestion from Middlebury College Museum of Art director Richard Saunders. The Vermont chapter of the ASLA is footing the exhibition rental fee and transportation of the 45 photographs from Palm Springs, Calif., where they were last shown.

Adam Portz, past president of ASLA VT, said the chapter was also motivated to volunteer significant time and connections for the exhibition's programming. "Our primary goal is to advocate for and publicize the profession around the state," he said. "Design is very influential to how people experience the outdoors."

Kiley himself never joined the ASLA, Portz added with a chuckle, "but we won't hold that against him." 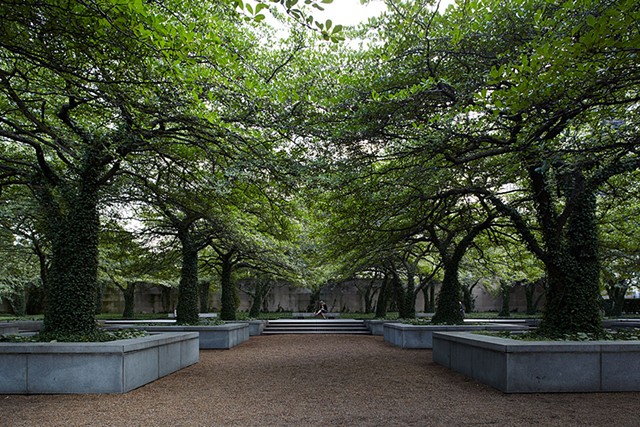 Kiley seems to have eschewed establishment ideas in general. He enrolled in Harvard University's undergraduate landscape-architecture program in 1936 but was kicked out after two years for refusing to produce assignments in the traditional beaux-arts style. From 1939 to 1940, he and Harvard students Garrett Eckbo and James Rose published three articles in Architectural Record that amounted to a design manifesto. They are excerpted in Amidon's book.

"It is necessary to separate the individual [plant or tree] from the mass," they wrote, in opposition to the practice of imitating nature's profusion in landscapes. "We thereby achieve volumes of organized space in which people live and play."

Kiley also practiced architecture early in his career, working briefly for the U.S. Housing Authority in Washington, D.C., where he met the renowned architect Louis Kahn. In 1943, Kiley gained a New Hampshire architectural license — he had met his wife, Anne Sturges, there — with recommendations from Kahn and rising starchitect Eero Saarinen, another D.C. contact who would prove key to his career. After two years in the army, serving on the design staff of the U.S. Army Corps of Engineers, Kiley was assigned the design of the war-crimes courtroom at Nuremberg.

That assignment allowed him to tour European landscapes for the first time, in particular André Le Nôtre's vast, formal gardens at the palace of Versailles in France. 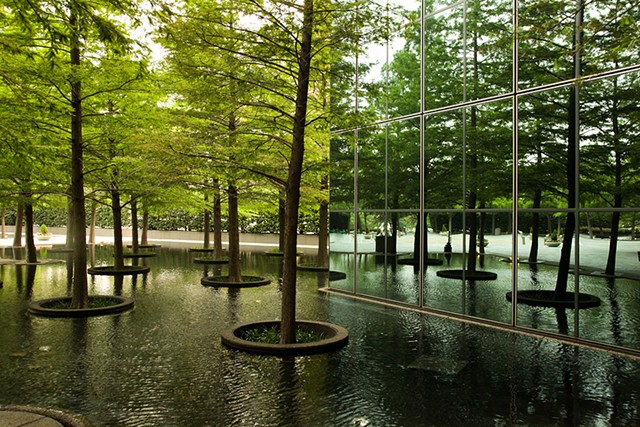 "Kiley's influences were Le Nôtre, [Thomas] Jefferson, [Ralph Waldo] Emerson and [Henry David] Thoreau," said Peter Ker Walker of Charlotte. Walker worked with Kiley for 23 years, first as an employee fresh out of the University of Pennsylvania's landscape-architecture master's program, then as a partner in Kiley, Tyndall, Walker (1971-79) and Kiley Walker (1979-86). He spoke at the inaugural Kiley exhibition and will do so again in July at the Sheldon.

But, Walker continued, while Kiley often drew on the French 17th-century language of allées, bosques (groupings of trees) and other orderly grids, his aesthetic was equally influenced by his associations with the country's preeminent modernist architects.

"He had established contacts with the architectural profession because of his experience during the war, and thereafter he was the landscape architect of choice," noted Walker, who first trained as an architect in his native Scotland.

Saarinen and Kiley's design for the Gateway Arch project won that competition in 1947 — Walker described it as "a takeoff moment for Kiley" — and the two went on to do the now-iconic Miller House in Columbus, Ind., Dulles International Airport in Virginia and other projects.

Collaborations with many other architects followed, including with I.M. Pei on the East Building of the National Gallery of Art in Washington, D.C.; with the firm Skidmore Owings & Merrill to redesign Pennsylvania Avenue in the capital; and, in one of Kiley's office's final projects, with Santiago Calatrava on the Milwaukee Art Museum expansion.

Colman hopes the exhibition will help convey that, in Kiley's case, landscape "is designed part and parcel with the building." In the case of the Burlington cathedral, he said, "It wasn't that Edward Larrabee Barnes designed a building and Kiley did the landscape. They designed exterior and interior together. They reinforced each other. That was the case in a lot of Kiley's commissions."

Landscape architect Keith Wagner, of the Burlington firm Wagner Hodgson, studied Kiley's work in graduate school at Syracuse University and felt an immediate affinity. "There's an extension of the architectural geometry into the landscape," he said, "and a clarity, a crispness to how he designed spaces." Wagner Hodgson is the firm behind the redesign proposal for Burlington's City Hall Park.

Exhibition-related events will include a tour of Wagner Hodgson's latest completed project — a public park down the street from the Sheldon — as a way of getting people into a designed landscape to understand how it's made.

Peter Meyer, of Raycroft Meyer Landscape Architecture in Bristol, was one of the last two people to work in Kiley's office. He, too, studied Kiley in grad school, at Cornell University, and was hired upon completing his degree in 1989. "He was one of the very biggest names out there," Meyer recalled. "I was very lucky."

Meyer will speak on a panel about his recollections of working with Kiley. "He was astute at reading a site quickly," he observed.

"For all these designs that have been scrutinized and analyzed, Dan would always say it was just 'apt' — it was on the west side; we needed shade; it needed dimensions to match the house," Meyer continued. "It was amazing to start a project with him. He wasn't a very big guy, but he would become so animated at the possibilities."

Kiley produced only a handful of local projects, of which the exhibition documents two extant ones. In 1959, he landscaped the Currier Farm in Danby, in Vermont's marble-quarry region. Photographs show a grid of apple trees — deftly marrying traditional farm plantings and modernism — and marble-slab steps hovering over a geometric channel of spring water that is released back into nature on a hillside.

In 1994, Kiley designed Kenjockety, the Westport, N.Y., estate of sculptor Joel Shapiro and painter Ellen Phelan that was just a ferry ride across Lake Champlain from his office. Kiley installed a grassy poplar allée for an entry drive and other features that "derive maximum emotion from minimal form — square, circle, line," as he wrote with Amidon in The Complete Works.

These private residences are not scheduled for tours, but Kiley's design for Twin Farms near Woodstock is. Once the property of 1930s literati Sinclair Lewis and Dorothy Thompson, it was converted to a resort inn in the early 1990s with additions by Burlington architect Tom Cullins, of TruexCullins, and a 1992 master plan and site design by Kiley.

Sheldon executive director Bill Brooks, whom Seven Days reached by email in Paris just before his outing to see Kiley's L'Esplanade du Général de Gaulle, wrote that he was "thrilled" to learn of Kiley's Vermont and upstate New York designs through exhibition materials. Brooks knew the landscape architect personally — his cousin married a Kiley daughter — and has been delving into archival material relating to several Kiley projects, including "a possible assignment" at the Yale Center for British Art, he noted. 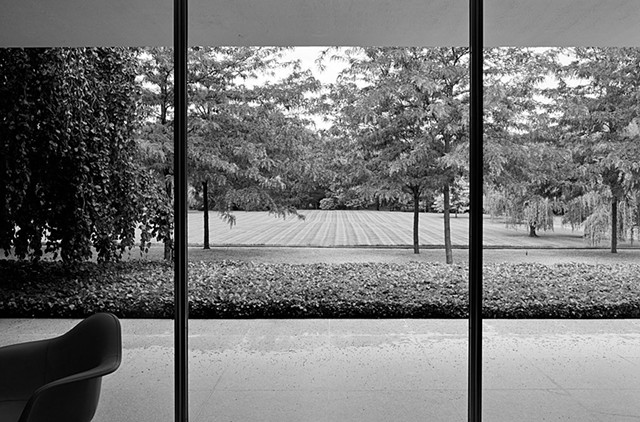 Kiley's East Farm office, whose landscape the designer had long shaped, burned to the ground from a lightning strike shortly after his death in 2004. More than half of his original drawings and other documentation was lost, though 600 projects' worth had already been moved to archives at the Frances Loeb Library, Harvard Graduate School of Design.

Most landscapes fail for less dramatic reasons — through lack of maintenance or, as in the threat to the Burlington cathedral, redevelopment. The Kiley exhibition is a project of TCLF's annual Landslide initiative, which aims to raise awareness and head off that decline by highlighting threatened landscapes.

"Landscape architecture is an innately ephemeral art," as TCLF director of communications Nord Wennerstrom put it. Even maintenance requires maintaining a delicate balance between original intent and practicality.

But TCLF's Birnbaum insists that the effort to preserve such ephemeral works of art, and particularly Kiley's, is worthwhile.

"There are really very few figures that are as beloved as Kiley was in the postwar[-era] profession," he said. "His impact was profound."