Tortilla Pop-Up: Not Real Mexican, But We'll Take It 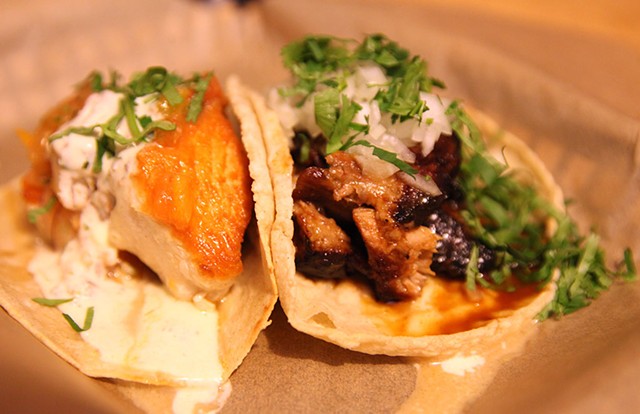 I am on the hunt for good, authentic, affordable Mexican cuisine in Vermont. Preferably including $2 tacos and margaritas the size of small countries. This search took me to Stowe last week. My destination: Tortilla, which calls itself "an uncommonly authentic taqueria."

Tortilla is the project of Audrey Hollingsworth, 23, and Anthony Krill, 30. The restaurant "pops up" every Tuesday and Wednesday at Green Goddess Café. That is, after the café closes and the staff has cleaned and left, Hollingsworth and Krill set up their after-hours taco shop. Both are employed in the service industry — Krill as a line cook at Idletyme Brewing and Hollingsworth as a server at Doc Ponds, both also in Stowe. Mi Casa Kitchen & Bar closed a little over a year ago, leaving the town few full-time Mexican options.

On a Tuesday at 6 p.m., Tortilla was bustling. Families, couples and groups of friends were already seated, and several people were lined up to place their orders. As I joined them, and more appeared behind me, I anxiously asked my dining partner to snag one of the only remaining tables. The wait to order was lengthy, but the reason was clear: Tortilla is just a two-person show. Hollingsworth was taking orders, grabbing drinks and delivering food as Krill made tacos in the back.

Finally, it was our turn to order. After Hollingsworth acknowledged me and said she'd be right back, a woman appeared beside me, saying she was picking up a takeout order. She stepped in front of me, and Hollingsworth proceeded to ring her up. A regular, I concluded from their conversation. Now, perhaps I was a little hangry (you know, when you're so hungry you're borderline angry?), but this rubbed me the wrong way. Not a great first impression.

While I waited, I had time to study the options. Tortilla offers four basic types of tacos: pork, chicken, fish and vegetarian, all priced at about $5. The menu featured 10 items — including those tacos, salsas, churros, rice and beans — plus a nightly special. Tonight's was a shrimp taco with mango salsa.

At last I stepped up to place our order: $51 for five tacos, the salsa/guacamole appetizer, churros and two bottles of orange San Pellegrino. (Beer was available, but we weren't in the mood.) I estimated this would satisfy us, though you never know how big tacos will be.

Our appetizer arrived — a basket of freshly salted chips and three soup-cup-size portions of dipping sauce. The first held a red salsa. My partner and I debated the contents. A mystery ingredient gave it a complex, fiery flavor without overwhelming heat. I settled on a dash of chipotles in adobo, while my partner tried to recall the flavor of the herb epazote. We were both wrong, as it turned out. Krill roasts most everything that goes into his salsa, including the jalapeño, and that's what gives it the unique, addictive flavor. 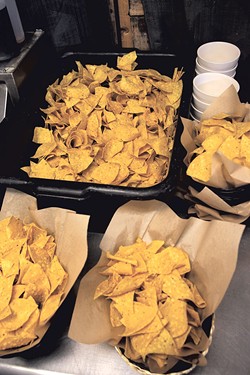 The other two dips were tomatillo salsa and guacamole — both simple but well done. For $10, the trio was a deal. We tried to pace ourselves and leave room for the tacos to come. My view of Tortilla was shifting. Then, with my first bite of a pork taco, I fell in love. The meat was juicy and tender, packed with sweet and savory flavors.

Later, I learned Krill's trick. He starts by making a stock, then adds pineapple to give it a salty-sweet dynamic. He braises the meat in this mixture — then, at the last minute, just before serving, tosses it in the fryer. "Just enough so the outside gets crispy and the inside stays tender," he explained. He folds the meat into a tortilla and sprinkles it with shredded cilantro and diced onion — just enough to add flavor without burying the pork.

I passed the taco to my companion. Then, as one might intently observe a groom's face when his bride walks into the wedding service, I watched her eat. Her eyes widened with what I took to be enthusiastic approval. She nodded, handed the taco back to me and said simply, "Damn."

In just these two dishes, I could already see a theme: The food at Tortilla is made from simple ingredients and cooked with impressive technique. Krill is a talented and thoughtful cook who acquired his skills not at culinary school but in kitchens. He spent almost two years at Michael's on the Hill in Waterbury Center before coming to Idletyme (also owned by chef Michael Kloeti and his wife, Laura).

On my second visit to Tortilla, I was equally enamored of Krill's fish taco. Several hunks of fish were tucked into a tortilla with roasted tomatoes and crema. The use of citrus here was unexpected. Small pieces of orange played well with the other elements, brightening the flavors. The fruit went smashingly with the sweetness of the roasted tomatoes.

Overall, Tortilla is exceptional. But is it "uncommonly authentic"? Yes and no. It's certainly uncommon. Authentic Mexican, not so much — at least, not in the sense I was expecting. Take, for example, the vegetarian taco. "I'm not sure a kale-sweet-potato taco is native to Mexico," my partner remarked. Another example is the churros, which were served with a handmade spiced whipped cream not a traditional accompaniment for the dessert.

Unprompted, Hollingsworth brought up the taqueria's tagline when we talked later. "What we mean is, we try to apply an authentic practice when it comes to the foundation and flavors. We do add our own twists," she said. "It's not authentic Mexican food."

So, we're on the same page there. But if we just call this food what it is — cleverly created tacos with a focus on local ingredients (Vermont tacos?) — then it's damn good.

Tortilla will remain at Green Goddess on Tuesdays and Wednesdays for at least four more months, said Hollingsworth. She and Krill expect to extend their six-month contract with the café. The couple would also like to expand — perhaps into Waterbury and Morrisville — on other nights of the week and eventually open a food truck.

I'll keep searching for real Mexican food in the Green Mountain State, but even if I find it, I'm likely to continue my affair with Tortilla.

The original print version of this article was headlined "Mexican Mission"