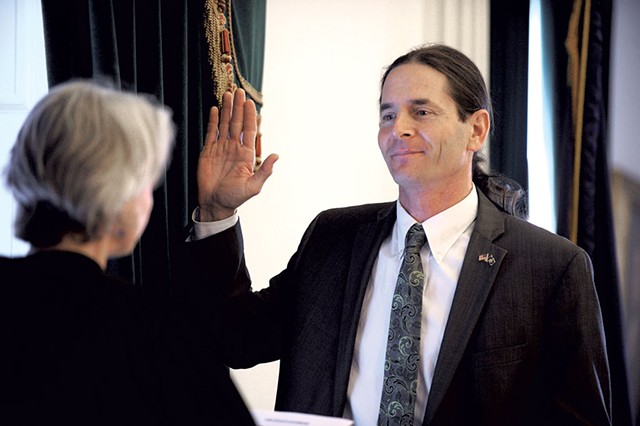 Last Wednesday, the day before taking office as Vermont's first Progressive lieutenant governor, organic farmer David Zuckerman showed off his new Statehouse office — and the agrarian imagery now covering its walls. The paintings of barns and silos replaced the construction-themed works favored by his predecessor, Phil Scott, an excavation executive who was moving on to the governor's office.

Sen. Ann Cummings (D-Washington) popped in to ask whether Zuckerman would continue Scott's tradition of dispensing free coffee in the foyer. Zuckerman assured her he would. But, he said, "There won't be paper cups." To be more eco-friendly, he'll use mugs.

In December, the liberal magazine the Nation declared Zuckerman the "most valuable new state official" in the country. He's the second Prog in Vermont history to hold statewide office; state Auditor Doug Hoffer came first. Both men, longtime Progressives, ran in the Democratic primary, and then under the banner of both parties in the general election.

"I think everyone agrees that having Zuckerman in the lieutenant governor role is pretty significant to the Progressive Party and to the people who support [its] values," said the state party chair, Emma Mulvaney-Stanak.

While Zuckerman's election is, indeed, a milestone for the party, there is an irony in his elevation: He may have less influence over public policy than he had during his two terms in the Vermont Senate. The position, sometimes derisively referred to as "lite gov," is largely ceremonial. It's often considered a stepping-stone to the governorship, as it was for Scott.

If Zuckerman is going to change policy — in addition to his office décor — he'll have to do it by marshaling support outside the Statehouse.

In Vermont, lieutenant governors moderate the debate on the Senate floor — calling on legislators to speak and deciding what is and isn't germane. They break tie votes, but those rarely occur. And they get a seat on the three-member group that assigns senators to committees.

The position requires a different set of skills than the ones Zuckerman employed during his 14 years in the House and four in the Senate. The 45-year-old has cultivated a reputation as an activist-politician — unabashedly championing, with some success, causes such as gay marriage, GMO labeling and marijuana legalization. Last August, Zuckerman surprised political insiders by triumphing over then-House speaker Shap Smith of Morristown and Kesha Ram, then a Burlington rep, in the Democratic primary. He went on to easily beat Republican Randy Brock in November's general election.

"I think we're about to see, for one of the first times, ... a proactive, activist lieutenant governor," predicted Mulvaney-Stanak.

"I think we're about to see, for one of the first times, ... a proactive, activist lieutenant governor." Emma Mulvaney-Stanak, vermont Progressive Party chair tweet this

But, said Sen. Chris Pearson (P/D-Chittenden), "Most of his influence will not be in the Statehouse.

"A lot of his legislative issues have been ones that had strong support in the grassroots and no support in this building," Pearson said during an interview last Wednesday in the Statehouse cafeteria. "His history has been to empower the grassroots and to influence the legislative process over time, so I think now he has a great bully pulpit to continue that work with a higher level of exposure, although, kind of ironically, a less direct influence on policy."

As Pearson spoke, Zuckerman ambled up to another table in the cafeteria and greeted Sen. Claire Ayer (D-Addison). After a bit of awkward small talk — they looked more like distant acquaintances than familiar colleagues — he departed.

The new lieutenant governor had looked far more at ease earlier that day at a press conference held on the Statehouse steps. Rights & Democracy, a liberal advocacy group that endorsed Zuckerman, had organized the event, but the crowd of roughly 70 included representatives from 16 organizations, ranging from the Sierra Club to Black Lives Matter.

Zuckerman, who wore a Carhartt jacket over his gray suit, was on a hugging basis with many of the people there. One of only two elected officials who spoke, he told the crowd, "We represent how people can control the agenda."

During an interview, Zuckerman elaborated: "I really campaigned on having more people's voices from everyday Vermont, from every corner of Vermont, come into this building."

Rights & Democracy executive director James Haslam is enthusiastic about the prospect: "[Zuckerman] can help open the door, basically, to the Statehouse and say, 'Come on in.'"

Haslam has been to the building many times, sometimes to lead protests, but until last week he had never set foot in the lieutenant governor's office. He was one of the first people to stop by on the morning this year's legislative session started.

Zuckerman said he intends to spend a fair amount of time outside the office. "I'm a conduit to both help bring information out across the state and to help individuals develop their voice within this system," he said.

The new LG also plans to hold "town meetings" — à la U.S. Sen. Bernie Sanders (I-Vt.) — around Vermont, particularly in "the parts of the state that are suffering the most."

Zuckerman, who frequently draws attention to his farming cred, says he'll focus on rural economic development. What does that entail? Expanding the agricultural sector by helping farms diversify, grow larger and access more markets, he said. Zuckerman wants to develop a Vermont brand for dairy products, adding value by getting farms to meet certain standards pertaining to water quality, labor conditions or other criteria.

He also plans to advocate for broadband in the areas of the state that still lack it and help recruit small tech businesses to set up shop in rural Vermont. "I don't have a magic wand to do that, but I certainly would be interested in working with the governor's economic development team," he said.

Zuckerman said he would continue to advocate for "cannabis reform," although he didn't sound especially zealous about it: "I think there are reasonable concerns that can be addressed with quality legislation."

It remains unclear how much sway Zuckerman will have inside the building to convert populist causes to policy.

Former governor Peter Shumlin made Scott a member of his cabinet. Scott will not be extending the same courtesy to Zuckerman, according to the new gov's spokeswoman, Rebecca Kelley.

Doug Racine, Vermont's lieutenant governor from 1997 until 2003, made the case that, "The ability to accomplish things is really dependent on the informal relationships one has with one's peers." He said he was able to influence legislation by bringing lawmakers together in his office and hashing out compromises behind the scenes. Zuckerman, Racine predicted, "will earn the respect of his colleagues, and with respect comes the ability to influence."

Though the lieutenant governor is in charge of moderating the Senate's debate, longtime lobbyist Kevin Ellis suggested that Zuckerman will have little influence over the body.

"It's a toothless position, and it's even more toothless than ever because of the skills of Sen. Ashe," Ellis said, referring to newly elected Senate President Pro Tempore Tim Ashe (D/P-Chittenden). "[He] will have total control of that chamber unlike anybody since Shumlin."

Ashe and Zuckerman both have Ps and Ds after their names — Mulvaney-Stanak calls them a "dream team" — but they have markedly different political styles. Colleagues say Ashe is more strategist than activist and has a better record of passing legislation by forging alliances with more moderate senators.

In his new role, Zuckerman will also have to learn to keep quiet. In the Senate chamber, the lieutenant governor has "no voice," said Sen. Dick Mazza (D-Grand Isle). "I think it will be difficult for him. I think he's been very vocal on his issues, whether it's minimum wage or ... gay marriage. I think it will be frustrating at times to listen to the argument without saying anything."

But Mazza and other members of the moderate old guard say they expect Zuckerman will conform to the role. "I think he'll be very respectful to tradition," said Sen. Dick Sears (D-Bennington), observing that Zuckerman proved himself as a senator.

Zuckerman is at least talking the talk. When asked about his priorities, he said, "My very first job, as mundane as it may sound, is to really make sure we establish the continued professional decorum of the Senate." He preached the virtues of civility and respect for institutions during his swearing-in speech — and to activists at the Rights & Democracy event.

The opinionated Prog has also shown commitment to mastering his more routine duties. Last Wednesday evening, Zuckerman walked up to the dais in the nearly deserted House chamber. Unaware that a reporter was watching from the balcony, he began practicing with the wooden gavel, in preparation for Scott's inauguration the next day. After a few tinny-sounding thuds, he asked the House clerk to tighten a loose screw.