Too Close to the Edge: Vermont Lawmakers to Focus on Shoreline Protection 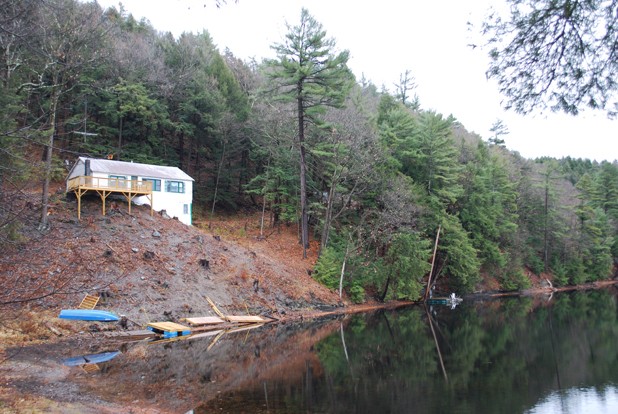 When legislation to restrict development along the edges of lakes and ponds failed to pass the Vermont Senate last spring, the bill’s supporters left the Statehouse with a new concern: What if property owners began to preemptively clear their lakeshore parcels to avoid restrictions that might win approval in the 2014 legislative session?

It may have already happened at Sunrise Lake, which straddles the border of Benson and Orwell, according to state environmental officials.

“Word is that the landowner did this ‘now’ because he was led to believe that he would lose all control over the management of his own shoreland property if a statewide shoreland bill passes,” ANR environmental scientist Amy Picotte wrote in a July 24 email to Trey Martin, the agency’s senior counsel for government affairs. Their email exchange came to light as the result of a public-records request filed by the Conservation Law Foundation that asked for documentation of any shoreland development “of concern” to ANR since the legislature’s adjournment.

“As you know, CLF was very concerned by the legislature’s failure to enact strong shoreland protection legislation prior to its adjournment,” is how CLF senior attorney Anthony Iarrapino explained the request. “While I hope that those concerns are unjustified, I fear they may not be in all cases.”

In this case, the Sunrise Lake property belongs to Orwell resident Peter Bonvouloir, who bought a roughly 900-square-foot cabin on a two-acre parcel last April, according to Benson town records. A photograph attached to Picotte’s email shows the small white structure perched above the water, on what looks like a freshly logged slope of stumps and raw dirt.

Picotte says ANR employees learned about the clearing while doing some routine monitoring at the lake. Technically, Bonvouloir did nothing illegal, and ANR didn’t take any enforcement action against him. Bonvouloir did not return messages from Seven Days seeking comment for this article.

But for Susan Warren, the program manager of ANR’s Lakes & Ponds Management and Protection Program, the shoreline clear cutting perfectly illustrates “why we feel we need some kind of regulation.” She and other scientists at ANR say Vermont needs to adopt statewide rules governing lakeshore development, rather than relying on a patchwork of local rules — which in many cases amounts to no rules at all.

Vermont passed some shoreland development rules in the 1970s, but they expired a few years later and were not reinstated. Ironically, those old regs inspired legislation in Maine that Vermont lawmakers are considering as they craft proposed restrictions here. Today, ANR says, Vermont is the only northeastern state without a statewide lakeshore protection rule on the books.

According to a 2010 report from the Environmental Protection Agency, shoreline degradation is the number-one problem for lakes all around the country. Vermont is no exception. Here, 82 percent of lake shorelands are in “poor” or “fair” condition because of excessive clearing that’s often compounded by the installation of driveways, parking lots and other impervious surfaces.

In a report to the legislature in January of this year, ANR officials confirmed that damage rates in Vermont’s lakes exceed the national average. In fact, they’ve fared worse, in terms of shoreland disturbance, than other lakes in the northeast region.

A well-vegetated shore is the first line of defense, according to the same ANR report: Vegetation filters runoff, prevents erosion and provides habitat for fish and other shoreland-dwelling wildlife.

But in Montpelier, crafting legislation to protect lakeside vegetation has been an uphill battle. Environmentalists and some lake property owners supported a House-passed version of new rules, which would require permits for most new or expanded clearings for impervious surfaces within 250 feet of a lakeshore. H.526 also calls for ANR to create vegetation management standards for those lots.

But concerns about property rights and governmental overreach caused the bill to stall out in the Senate, specifically in the Senate Committee on Natural Resources and Energy. Over the summer, lawmakers dispatched a shorelands commission to collect public comments and educate Vermonters about potential protections; more than 700 people turned out for six meetings throughout the state.

In Iarappino’s view, the legislative roadshow was a stalling tactic designed to pacify opponents of the bill. Sen. Diane Snelling (R-Chittenden), vice-chair of the natural resources committee, saw it as a chance to hear specific complaints about ways in which H.526 could be improved. One she heard repeatedly: “People are really concerned about how much bureaucracy there is.” Some citizens who attended the commission’s meetings argued that other water quality threats are more pressing than lakeshore development, including beavers, pesticide spraying, invasive species and agricultural runoff.

Although the commission’s final report isn’t due until January 15, a draft released last month recommends the legislature continue its consideration of regulations in the coming session.

Meanwhile, Snelling has drafted a new bill that regulates shoreland development under Act 250, the state’s land use and development act, rather than setting up a new permitting process. Currently most lakeshore parcels aren’t subject to Act 250 because of their small size. Additionally, Snelling’s legislation, which she’ll introduce during the coming session, lays out specific numbers and definitions for shoreland protections — for example, she suggests preserving vegetative buffers for 75 feet from a lakeshore edge.

“It provides a standard which people can comply with,” says Snelling. “I heard very clearly from people that they want to do the right thing, that Vermonters want to help protect their water, and they realize that everybody has to participate. They just want to know what the right thing is.”

Warren says that ANR routinely hears from property owners concerned about potentially destructive development on their lakes — but for the time being, ANR has little or no oversight over these activities.

About 20 percent of towns have enacted shoreland protections, but ANR officials say that’s no substitute for consistent and clear statewide guidelines.

You’d expect logger Nicholas Ecker-Racz of Glover to support that effort. He called ANR over the summer to report that one of his clients had asked him to remove lakeshore vegetation from the shores of Lake Parker, but he refused on grounds it would lead to erosion. The client simply hired another logger to do the environmentally questionable work.

Despite that, Ecker-Racz still believes regulation and enforcement are best left to individual towns and cities. He points out that state agencies can barely enforce the laws they already have on the books.

“Now you want to throw in shoreland monitoring of every lake and pond in the state of Vermont?” he says. “Not going to happen.”

Rep. Thomas Terenzini (R-Rutland Town) sure hopes not. He calls the proposed rules a “power grab” by ANR and its leader, Secretary Deb Markowitz, and wishes lawmakers would drop the proposed legislation altogether.

“If you buy a home or a camp on a lake or a pond, you paid a considerable amount of money right there,” says Terenzini. “And then for the state to come in and set up all these guidelines of what you can and can’t do with your property — I just think it’s wrong. I think it’s an overreach by government.”

“This isn’t about power,” counters Markowitz. “This is about the health of our lakes.”

Markowitz says that Vermont can’t afford to wait much longer to protect the health of those waters. Officials at ANR received other complaints about preemptive clearing this summer, though not as many as they anticipated.

“More and more of our camps are being turned into year-round residences,” says Markowitz. The image of sleepy, woodbound lakes and ponds has been replaced by a “lawn to lake” mentality that favors green lawns descending to the water’s edge.

Those lawns are sometimes treated with fertilizers that can pollute the water. And even when the grass is not treated, it doesn’t provide the same ability to filter other pollutants as denser vegetation, and it replaces the native shoreland habitat that nurtures wildlife and fragile aquatic ecosystems. As a result, Markowitz says, “That has a really serious negative impact on water quality.”

Bruce and Peggy Barter have witnessed that transformation on Seymour Lake. Bruce Barter’s parents bought a camp there in the 1950s, and now the Barters, retired themselves, spend half the year at the Northeast Kingdom summer home.

In the six decades Bruce Barter has been coming to the lake, the number of dwellings there has roughly doubled — to nearly 400 homes. More and more people are living on the lake year-round, say the Barters. As more homes have appeared, so too have suburban-style grounds.

Peggy Barter, a retired biology teacher, has seen the phosphorous levels in Seymour Lake double since the mid-1990s. Subsequent studies by ANR showed that the small tributaries that feed Seymour Lake didn’t account for that increase. The extra nutrients, which can fuel the problematic growth of algae and aquatic weeds, were coming from the lakeshore itself. The Barters say that lakeshore residents are already noticing the effects, in the form of thick plant growth clogging the water along the shore. That, in turn, reduces lake oxygen levels and shrinks habitat for fish and other aquatic life.

The Barters are skeptical that leaving shoreland protection to local municipalities will be effective, but they do believe that individuals can make a difference when it comes to promoting better shoreland development practices. Peggy Barter points to the new Vermont Lake Wise program, a joint effort of state environmental officials and a federation of local lake and pond organizations that promotes environmentally friendly landscaping practices.

As a member of the Seymour Lake Association, Barter helped educate other property owners about the program. She says 21 property owners on Seymour last year invited Lake Wise to their properties for evaluations, and she already has a long waiting list for next summer. Other neighbors are planting blueberry bushes along the water’s edge, part of the “Buffers for Blue Lakes” initiative through the Federation of Vermont Lakes and Ponds.

According to Barter, that’s all evidence that most Vermonters want to do right by their lakes; they just need to learn the facts.

“All the evidence shows that if we don’t change our ways, we’re going to be sorry,” she says.