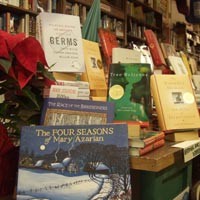 You can tell a lot about a bookstore by which fiction “faces out.” At Bear Pond Books in Montpelier, Vermont writers Lee Durkee, Robert Jones and Archer Mayor get as much exposure as Stephen King and John Grisham. Scanning floor-to-ceiling stacks serviced by an old sliding wooden ladder, it’s clear local literati are masterminding the displays — “Mosher” gets his own hand-lettered label right next to “Morrison.”

It’s the same story outside on the remainder racks. For less than five bucks you can pick up a hard copy of Howard Norman’s early-retired Museum Guard or Louise Glück’s not-so-new Vita Nova. Or go for something a little more continental: poems by W.B. Yeats, Shakespeare or Italian bard Eugenio Montale — the bilingual edition. No other bookstore in Vermont boasts such a classy collection of cut-rate books.

You could say the 28-year-old bookstore is an accurate reflection of the reading population that surrounds it — which, if you include part-timers, appears to include more award-winning writers per capita than anywhere else in the country. Central Vermont is crawling with educated, active individuals who are more likely to spring for half-price Proust than the latest coffeetable book.

But that wouldn’t be giving enough credit to independent owners Michael Katzenberg and his wife Linda Prescott for getting the funky formula just right. Bear Pond caters to the intellectually curious without being pretentious. Its long, narrow, crowded interior and cheerful directionals suck you in, whether you’re buying a bin Laden biography, a Vermont Life calendar or a couple of postcards. The place feels less like a retail outlet than a low-key library where no one is going to tell you to shush.

In fact, Bear Pond sounds like a great bookstore, from the interesting conversations that crop up among customers to the groanings of its well-worn wood floor. Although it can cause embarrassment during readings, the latter offers creaky comfort as you explore semi-private book nooks organized by similarity of subject. You find politics and history in one section. Another is devoted to gardening, science and field guides.

“We have a significant poetry section, and that is definitely recognized,” Katzenberg says of a section that surrounds the shopper with poetry on three sides.

Also noteworthy is an expanded collection of books inspired by the war in Afghanistan that includes edifying tomes on Islam and the Middle East. “It’s a study area,” offers staffer Fran Cerulli, who moonlights as a freelance literary columnist and book critic for the Barre-Montpelier Times Argus. Like all the people who work at Bear Pond, she reads what she recommends — or at least has read about it. Yellowing book reviews are taped up around the store. A section of staff-selected titles à la Waterfront Video is next to the cash register.

So is a handmade poster promoting an upcoming book signing with Mary Azarian, the Caldecott Award-winning illustrator who lives in nearby Marshfield. Bear Pond hosts dozens of such literary events, almost exclusively with local authors. What sets the store apart, according to Vermont poet David Budbill, is “an involvement and commitment to the writer in the neighborhood over a long period of time… Sure, I like reading in Santa Cruz, but I’m a stranger there,” he says. “Reading at Bear Pond is like old-home day. You see all your friends.”