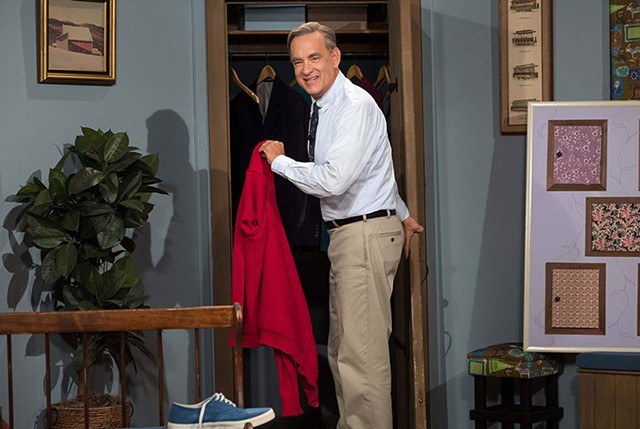 There are only a handful of actors whom it's impossible to imagine playing a movie superhero. Surely, Tom Hanks is foremost among these. He may have played Walt Disney in 2013's Saving Mr. Banks, but the idea of him as a Marvel character is unthinkable. The funny thing is that the new film from Can You Ever Forgive Me? director Marielle Heller comes astonishingly close to giving Hanks a role in much the same spirit. Instead of tights and a cape, though, his uniform consists of a cardigan and sneakers.

Merriam-Webster defines a superhero as "a fictional hero having extraordinary or superhuman powers; also: an exceptionally skillful or successful person." Mister Rogers was a hero to viewers of his long-running PBS children's program, but he wasn't precisely fictional. The character who hosted the show appears to have been a concentrated version of the person Fred Rogers was in real life — and, clearly, that person was exceptionally skillful and successful. This is the second movie about Rogers in as many years, following Morgan Neville's documentary Won't You Be My Neighbor?

As channeled by the two-time Oscar winner in A Beautiful Day in the Neighborhood, Rogers also possesses extraordinary, essentially superhuman powers. He has, for example, a sort of X-ray vision that enables him to see through the cynical front affected by Lloyd Vogel (Matthew Rhys), a journalist sent to profile him. Faster than a speeding bullet, Rogers spots the traumatized child inside the writer and sets in motion a process calculated to heal his spirit, salvage his marriage and generally save his life.

That fantastical undertaking is the real subject of Heller's film. Which, by the way, is the furthest thing imaginable from a biopic. If anyone has an origin story here, it's Lloyd. As the movie begins, Rogers is already world famous and getting on in years. Writers Micah Fitzerman-Blue and Noah Harpster alchemize a 1998 Esquire piece by Tom Junod into a fusion of melodrama and magic realism. What they try to do, I think, is suggest how it must have felt to be drawn into Rogers' aura and reborn.

One minute, the interviewer is asking his subject questions only to find them deflected back on himself. The next, he's driving down the miniature streets of the Neighborhood of Make-Believe and strolling through the castle of King Friday XIII. Along the way, the former minister gently extracts the childhood memories at the root of the writer's pain.

The story shouldn't work. It's the definition of sap. Lloyd's old man (Chris Cooper) was a philandering lush who walked out on Lloyd's dying mother. Now he's back and looking for forgiveness. Lloyd rebuffs the guy when he knocks at his door. Of course, it turns out Dad is knocking on death's door, as well. Take a wild guess on whether father and son bury the hatchet with a little help from their new friend.

It's impossible to imagine another performer pulling this off. The actor single-handedly supplies the film's emotional voltage. Take him out of the picture, and all you'd have left is a weird Lifetime movie. No, Hanks probably won't ever play a Marvel character, but the magic he summons to resurrect Fred Rogers is the closest thing you're likely to see to a real-life superpower.