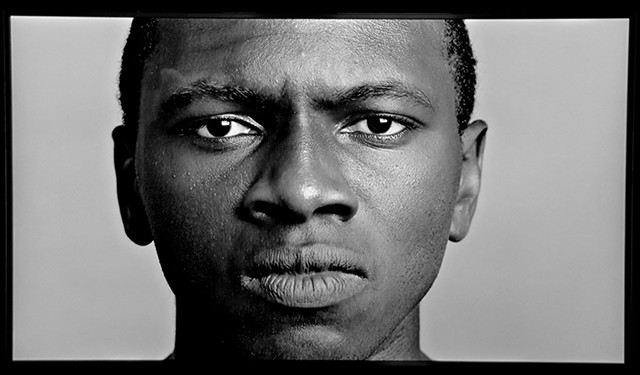 Since 2007, Burlington photographer Todd R. Lockwood has used his 1967 Hasselblad to carefully capture the faces of some of his visually compelling friends and acquaintances. Not everyone makes the cut, and Lockwood does few commissions. The selective results are large-scale, black-and-white, square-format portraits that are dazzling in detail and depth. His subjects look directly at the camera, allowing viewers to, in turn, study their gazes in a manner that's rare in real life. Who knew, for instance, that former Vermont governor Madeleine Kunin had such mesmerizingly sultry eyes before Lockwood captured them?

Kunin's portrait, along with many others he has previously exhibited, currently line the two rooms of the Champlain College Art Gallery in Burlington. But the main focal point of "Portraiture Reimagined," as the show is titled, is an 80-inch video monitor. On it are looped 10 portraits that one might call live. Any viewer can use a cordless mouse to start, pause and rewind the series of brief films.

Lockwood began pursuing this new direction in portraiture after purchasing the latest in movie-camera technology last October: an EPIC-M DRAGON Monochrome made by RED, which shoots only in black and white and in extremely high resolution. The subjects of his "cinema portraits" — the photographer coined the term — hold the same frontal gaze as in the stills but for two to three minutes each, with no edits. Viewers can practically see into their pores while actively returning their gazes.

Lockwood didn't just ask his subjects to look at the film camera for a few minutes, which would have been an intriguing but facile step beyond still photography. Instead, during each shoot, the subject was listening to his or her recorded voice — reading a poem, describing an experience or, in one case, playing a saxophone — and so the face is awash in changing emotions. Viewers hear the same recording while watching the silent subject react. Some are more expressive than others, but in each case minute facial changes become riveting.

The first portrait, titled "Chicago," is a particular spectacle. In it, a young black man named Claude Mumbere listens to himself reading Carl Sandburg's poem of the same title. It was the performance that launched the two-time high school winner of the Vermont Poetry Out Loud competition to second place nationally in 2012. Mumbere is a confident actor, and expressions roll like waves through his face. While his recorded voice utters the line "laughing with white teeth," he laughs silently, revealing his own amazingly white teeth. Occasionally, Mumbere looks as if he can barely contain himself from mouthing the verses. He is re-creating his performance without actually uttering the words.

Mumbere is made for film; viewers would be hard-pressed to tear one's eyes from his expressive face, whether they know the subject's history as a performance artist or not. A brief introduction outside the viewing room mentions Mumbere's accomplishments, but Lockwood provides little or no biographical information about his other subjects. Nor does he offer any explanation for why they chose what to voice or, for that matter, why he chose these subjects in the first place.

Margaret Strouse listens to herself reading a poem that's not her own — Rainer Maria Rilke's "You Who Never Arrived." She is clearly not an actor; Strouse has a beautiful face, but literary-minded viewers may prefer to listen to the poem without that distraction. Her portrait might be more compelling if we knew the reason behind her choice of text.

John Killacky listens to a text he wrote that seems to be a poem. He has a long history with the stage; many Burlingtonians know him as the executive director of the Flynn Center for the Performing Arts. What surprises in Killacky's portrait is the narrative from his earlier life as a former marathoner and dancer cut down by an unstated injury that made it difficult to stand, or maintain a love life. By the end of his portrait, Killacky is moist-eyed, presumably reliving those difficult days in memory.

In "Portraiture Reimagined," the subjects with stage awareness are the most compelling. Add to this category Phish bassist Mike Gordon. It is pure entertainment to watch his "performance" as he listens to his prose narration about the inspiration for starting the now-renowned band. Smiling coyly, Gordon plays with Lockwood's expectation of a frontal gaze and moves his eyes — in sync with small stretches of his music that Lockwood inserted in his narrative — up, down or sideways. His eyes become a pair of veritable dancers.

Whether featuring a performer or not, however, each of Lockwood's portraits is a performance of sorts. The subjects are not spontaneously emoting; they were given the finished audio file, sound effects and all, a week ahead of the shoot, according to the photographer. (Mumbere's, his first, is the exception: Lockwood told him to come back the day after he filmed him reciting but didn't say why.)

It's impossible to know whether the subjects of "Portraiture Reimagined" practiced reacting to their own words in front of a mirror. Possibly the results would have been different had Lockwood filmed them listening, unprepared, to the same recordings.

Lockwood's own declared intentions seem to point away from craftedness. In remarks at the show's opening, he said, "After a decade of making portraits, I'd been finding them too ambiguous." In an email later, he specified that his still portraits provide viewers with "often too much room [for interpretation]." Stills cannot "capture a complex human story in a fraction of a second," he added.

Can the cinema portraits? Clearly, Lockwood — who trained in photography and then took 30 years off to pursue other interests, including owning a recording studio — thinks they do a better job. As curator Chris Thompson points out, Lockwood's project is not rooted in irony, as were Andy Warhol's "screen test" films of visitors to his Factory, a project that might be considered a progenitor to this one.

Instead, Lockwood's is a genuine attempt to portray people's essences. In his world, access to that certainty increases with the frames-per-second capacity of one's technology. Genuine or not, what a view it is.

The original print version of this article was headlined "Close Encounters"