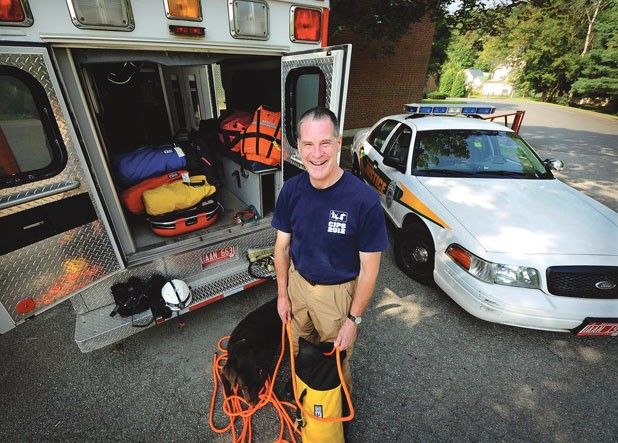 Tom Harty wears a lot of hats. The infectiously enthusiastic instructor in the public-safety and criminal-justice program at Randolph Technical Career Center is also a Congregational minister, a funeral director and a father of two.

Harty’s eclectic résumé is so jam-packed with jobs, it’s hard to believe he’s only 56. He’s worked as a Vermont state trooper, a security guard, marketing director at Cabot Creamery and deputy secretary of agriculture under former governor Howard Dean.

Harty has been involved in the creation of Guinness World Records’ largest (12-by-12-foot) grilled-cheese sandwich, the largest ice-cream sundae and the world’s biggest scarecrow. In his twenties, Harty took up skeleton racing and says he was one of the first licensed racers at the Lake Placid track. “Anything with adrenaline, I loved it,” he says.

Harty also played an integral role in two of the region’s most devastating recent events. When Tropical Storm Irene tore through Rochester, he recovered and identified the bodies and personal belongings that surfaced from that town’s decimated cemetery. And in 2008, he directed the funeral of slain 12-year-old Brooke Bennett.

Harty never went to college. He took the Police Academy exam on a whim — and passed. Same with the national exam to become a funeral director. To become a licensed minister, he opted for the low-residency Vermont Academy of Spiritual Training. This semester, he’s finishing up his final teacher-certification class at Vermont Technical College.

It’s fitting that this self-taught man, after substitute teaching at Randolph Union High School “on a whim,” would end up at Randolph Technical Career Center, where for the past five years he has taught his high-school-age students — and, when possible, gotten them certified in — everything from rope and ice rescue to writing traffic tickets.

Seven Days sat down with Harty in his Randolph classroom last week in the relative calm before the school year begins.

SEVEN DAYS: What were your impressions of RTCC when you first started?

TOM HARTY: I fell in love with this place, instantly. This is hands-on learning. These kids are here by choice, and they want to learn. And when somebody cares about them, they get it.

SD: Is it strange to be teaching, after skirting formal education pretty much your whole life?

TH: Deep down, I think there’s a reason for it. My father went to high school, my mother went to high school. But every day my father read the Boston Globe, the New York Times, the Rutland Herald, the Brattleboro Reformer and anything else he could get his hands on. There was always something in our hands to read. So the big thing I tell these kids is to read. Read, read, read.

SD: How often do your students pursue careers in the field after graduation, and is that part of your mission?

TH: What I hope we turn out is individuals who either make the decision that It’s not for me, but, boy, I liked the medical portion; maybe I’ll go be an EMT. Or I didn’t really like the police stuff, but I really loved the fire stuff, so I’ll be a psychologist and a volunteer firefighter. What they’re learning are critical-thinking skills, problem-solving skills and adaptability.

SD: Tell me about an adventure you’ve had with your students.

TH: I had the kids out on a 100-foot cliff down in Royalton. They were setting up for a rope rescue. And one of my students who had a history of a heart condition had chest pains.

So I’m on the radio down below. The kids are doing a medical evaluation, and they fill me in: Here’s her [blood pressure], here’s her pulse, here’s her respiration, here’s how she looks. Is she getting better or worse? Worse. OK, so I call 911.

Royalton Rescue comes rolling up. And they’re like, “We’ve got to call Hartford heavy rescue. We don’t do this stuff.” I say, “Give them two minutes, she’ll be down.”

The radio comes on, and the kids are talking to me and being very professional, very calm. And they’re like, “We’re over the edge, descending, 10-4.” I always tell them to alleviate the anxiety of the patient, act like you know what you’re doing. When you have an arterial bleeder, you say, “Oh, we deal with this all the time.”

So as they’re coming down, the litter tender, this kid named Mason, says, “Don’t be nervous; we’ve done this 100 times.” And [the girl with the chest pains] goes, “You lying son of a bitch!” And everybody’s laughing.

Anyway, we get her down and in the ambulance, and the fire chief is there and he’s watched this whole thing. He looks at me and goes, “Who are you people?” and I go, “Oh, we’re the tech center.”