To the Head: Losing the Plot at the Vermont Growers Cup 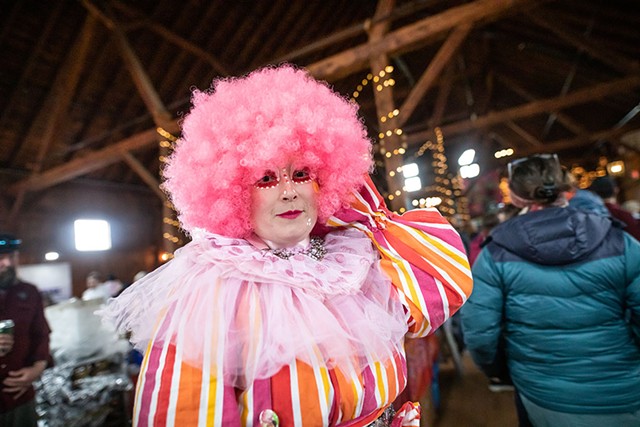 I didn’t realize I was stoned until the woman in the clown suit started talking about her side hustle: handing out joints at corporate events.

I shook my head as if a blast of feedback at a concert had startled me. The woman, who later handed me a business card identifying her as Doodles the Clown, stared at me with eyes framed by pink cosmetics and star-shaped glitter.

“I usually carry a few pre-rolls, but it’s been crazy here today,” she said in a surprisingly un-clown-like voice. “Who are you guys with?”

In a fit of unnecessary mystery, I neglected to answer Doodles right away, instead looking to my photographer, Luke Awtry.

To be fair, my quest to keep it straight at the third annual Vermont Growers Cup, also known as the Headies Cup, the state’s premier cannabis showcase, was doomed from the start. Held on Saturday at the Barns at Lang Farm in Essex Junction, the Headies featured almost 20 different growers, cultivators and weed-adjacent businesses, showing off their wares just as Vermont prepares for a fully legal cannabis marketplace by October.

I could say my editors chose me to cover the Headies for my shrewd reporting, but let’s be honest: you send the music editor to a weed event because you assume he knows his way around the Mary Jane. (I do.) Nonetheless, any attempt to not get high was a tall order.

From the minute I walked into the big barn, there were complimentary joints, gummies, cookies, granola, tinctures — basically every form of weed delivery system imaginable, all presented to me like I was some combination of a Roman emperor and a hedge fund manager having a midlife crisis at Burning Man.

I’m not going to lie: Teenage me would have been horrified to see adult me dodging all the free cannabis. Holding strong, I waded through the packed crowd of surprisingly eclectic weed enthusiasts. Sure, there were dudes with ponytails and hemp necklaces. And yes, I was slightly worried on two separate occasions a drum circle might break out. 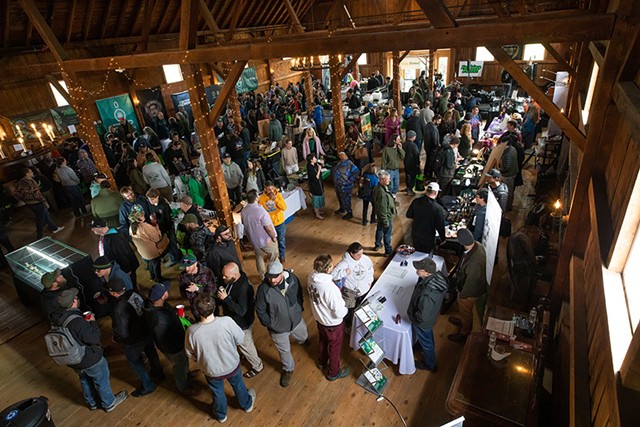 But there were also old-guard Vermont stoners, the OGs who have been growing anonymously for years, hanging out with younger entrepreneurs, ready to cash in on an industry some forecast to make $230 million by 2025. For all the cars with Grateful Dead stickers in the parking lot, there were plenty of Audis and Mercedes Benzes.

I stopped at the Magic Mann booth, a cannabis bakery and café in Essex Junction. Someone handed me a sample of CBD coconut oil at roughly the same time a woman walking by offered me some dog treats. She pointed at the CBD oil and urged me to use it on any dog I knew with sore joints.

“I think this is for cooking,” I replied.

“It is,” the person behind the Magic Mann booth seconded.

“Good, cook something! No one cooks anymore,” dog treat woman said. “How are your knees, by the way? Put some on them.”

At some point, I ate a low-powered gummy, maybe a few milligrams, feeling perhaps overly confident it wouldn’t make a dent. Another Good Samaritan gifted me some weed chocolates as I waited in line at the Emerald Rose Grows table, but I stuffed those in my pocket.

I felt pretty on top of my game as I spoke with a middle-aged man from the West Coast wearing a dark beanie. He started to explain his process of treating soil with volcanic ash from Crater Lake in Oregon when he excused himself to talk with a colleague, a woman wearing a hoodie that read in all caps, BUY WEED FROM WOMEN.

I dropped my guard at the Maple Jane table when I took a few shots of infused maple syrup. The first sign that perhaps my tolerance wasn’t as high as I thought was when I felt a sudden flash of paranoia. Was I being a crappy journalist?

It’s fine, I told myself. You haven’t smoked anything all day. You just had some maple syrup, every Vermonter’s God-given duty. Relax, you baby. 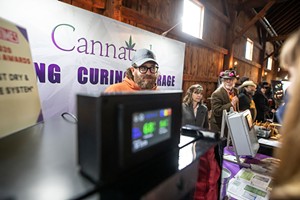 Unfortunately, my fears were validated when I tried to have a conversation with a very patient man named Ed (probably), who worked with Cannatrol, a division of Cannabis Dry and Cure Technology. The North Springfield company, which specializes in post-harvest drying and curing of flower, was there to showcase its patented Cool Cure system. Perhaps being foolhardy, I asked Ed how the system worked.

Ed set about explaining the product with equal parts precision and passion. This was a man who believed in his product and wanted the customer to understand why using the Cool Cure system was so beneficial to a harvest. He mentioned things like dew points, increasing yields and locking in terpenes, THCA levels — maybe something about dilithium crystals?

I don’t know. At this point I had the “Night Court” theme song stuck in my head and was really vibing on the bass line. I might have actually been nodding my head to the beat at one point.

Even as Ed noticed the glazed look in my eyes, a kid straight off the University of Vermont campus cut in, full of much more-informed questions. I took my chance and slipped away and … straight into Doodles the Clown, where our story began.

Cannatrol Applies Food Curing and Aging Science to Cannabis
By Ken Picard
Business
After the clown encounter, I accepted that I would have to cover the event stoned. Pulling together all my focus, I approached a crew of home-growers who were huddled in a circle, off to the side of the vendors.

“I’m not saying this isn’t awesome, I just think it’s a preview of what’s to come,” a bearded man in a black hoodie was saying, defensively.

“We’re not going to be buying weed in fucking Walmart,” quipped a woman standing beside the man. “It’s not going to change your life that much.”

“It’s the money that’s freaking everybody out,” the man replied. “You think local operations are getting any? For real, mark my words: It’s going to be, like, weed malls. Which is fine, but I just think it’s weird.”

Fighting off the stoner urge to, you know, not, I approached the crew and said something that came out like this: “Yo, I’m Seven Days. With, I mean. I’m with Seven Days. What are you scared about with the big weed stuff?”

Thankfully, that was the moment the band started to sound check, teasing the main riff to Black Sabbath’s classic “Sweat Leaf.” One of the homegrowers pressed an edible and pre-rolled joint into my hand as the group moved towards the stage. 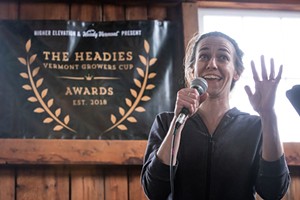 “They’re about to announce the winners,” he informed me, shouting over the sound of the guitarist tuning. “Smoke that when you get a chance, you’ll like it!”

The music stopped and Monica Donovan took the stage. The CEO and co-founder of Heady Vermont, which presents the event, smiled through a few rounds of applause before she and several others began announcing the winners and runners-up in the categories of best indica, sativa, hybrid, outdoor, CBD, hemp, pre-rolls, rosin, hash, CBD concentrate, edibles, and finally, topicals.

As each winner came to the stage to collect their trophies, the packed house roared in support, with no sign of any rivalries in sight. Each win seemed to be a win for the entire scene, with tears and hugs going around in abundance.

Awtry, the photographer, was mingling with the winners, snapping pictures and congratulating them for their green thumbs. The party was really just getting started and would eventually move to Waterbury for an afterparty at Zenbarn, but I slipped out of the front door with a proper Irish goodbye. 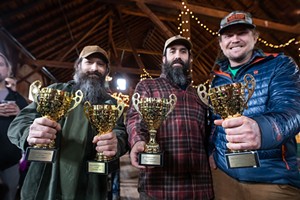 While waiting for my more-sober compatriots in the parking lot, two women walking a dog passed by, wreathed in a cloud of smoke. One of them smiled at me and held out a still-burning blunt, which smelled so good it had to be one of the finalists’ strains, a question in her upraised eyebrows.

“No such thing,” she replied as they disappeared past the taco trucks.

For the first time in three hours, I was alone and in relative silence, standing in a parking lot on an overcast day and finding my response time to most things to be significantly slower.

“I have to disagree with you,” I finally replied to the woman and her blunt, a full minute after they had been gone.