To Market, to Market

How a downtown grocery store could fuel civic revitalization in Barre 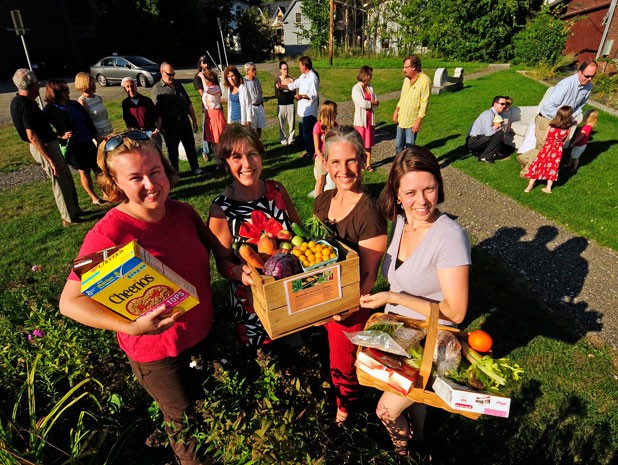 The central Vermont city with the unfortunate nickname “Scary Barre” is well on its way to shedding its down-and-out reputation, as residents’ excitement mounts around the revitalization of the city’s Main Street. Some Barre citizens think the time is ripe for a development for which residents have clamored for 20 years: a downtown grocery store.

And not just any grocery store, but one designed by and for the community. The organizers behind the planned Granite City Co-op say that, if bigger grocery store chains don’t want to build in Barre, Barre will build its own.

“We’re tired of waiting for someone to come along and meet our needs,” says Emily Kaminsky, a board member of the fledgling co-op.

Not to say that Barre is a food desert: There’s a Hannaford two miles and a Price Chopper three miles from downtown, and a Shaw’s five miles away in Berlin. Even within the city, a shopper can find a few remaining neighborhood markets.

But many Barre residents who live or work downtown remember the days when the old Grand Union was the place to see and be seen — not to mention pick up last-minute groceries on the way home after work. The store pulled out some 20 years ago when the chain declared bankruptcy.

Now there’s a possible opening in the forthcoming City Place development, a mixed-use office and retail space in downtown Barre. The developer’s plans call for a grocery store on the ground floor of the new, $15 to $19 million building. Kaminsky and others took note when they heard the developer was having trouble courting chains because of the store’s proposed, relatively small space. While the Granite City Co-op will certainly look at other downtown locations, she says, the City Place opportunity “has been the impetus for all this excitement and energy around starting our own community-owned marketplace.”

The potential store’s organizers shy away from using the word “co-op” too frequently; for some shoppers in economically diverse Barre, that’s synonymous with “expensive.” Instead, Kaminsky says the focus would be on healthy, affordable and convenient options, from bulk grains and local produce to cheaper conventional goods. The hope is that the market would appeal equally to shoppers who patronize the Hunger Mountain Coop in Montpelier and downtown residents with limited incomes or transportation options.

“It would be great for the shopping aspect, but also just as an anchor for the downtown community,” says board member Hilary Schwoegler.

The fledgling co-op raced to raise enough funding to qualify for a matching grant from the Food Co-op Initiative. To date, the group has drummed up $4300 from about two dozen donors, and this week unveiled a video that launches its independent crowd-funding efforts. But even if it earns the Food Co-op grant, the group will have a long way to go. Kaminsky estimates some $57,000 will be needed in the start-up phase. Most of that will go toward a consultant to devise a business plan. A $9000 chunk will pay for a project manager (for now, the project depends on volunteers).

“We have a lot of work to do in a short period if we want to jump onboard the City Place train,” Kaminsky says.

DEW Construction of Williston aims to begin work at City Place in late October or early November. The company is still finalizing the design, waffling between a four-story building of 80,000 square feet and a five-story one of 93,000 square feet. The final square footage will depend on whether a few more key tenants sign on. DEW already has some prominent renters lined up, including the Vermont Department of Education, which has committed to 42,000 square feet of office space.

With all these plans gaining steam, Dan Jones, executive director of Barre Partnership, a nonprofit dedicated to creating a “thriving downtown” in the city, says the excitement is “palpable” in the city. Schwoegler agrees. “I feel like there’s definitely a renaissance coming,” she says.

That’s good news for Barre, according to city manager Steve Mackenzie, 64, a lifelong resident. He admits the city was “sort of down in the dumps” in recent years. Besides stagnant economic development, Barre was shouldering what residents thought to be a disproportionate number of probationers and parolees assigned to the area by the Department of Corrections.

“For a while, Barre had developed a bad reputation, and that reputation became frozen in time,” adds Mayor Thom Lauzon.

Meanwhile, “We would hear all these stories about back in the day, [when] Barre was the downtown for central Vermont — things were booming,” says the Partnership’s Jones. Then came the mall in Berlin, with a Walmart. “When we moved here [two years ago], there were a lot of empty storefronts,” Jones notes.

Today, city boosters will tell you the malaise is lifting.

First came the $17 million reconstruction of Barre’s Main Street — a two-year, half-mile overhaul of the downtown’s underground utilities and aboveground services. (Barre’s share of federal and state funding is roughly $1.75 million.) Nicknamed the “Big Dig” by Barre residents, the project was 30 years in coming. Lauzon, 51, remembers it first coming up for discussion at a city council meeting when he was a high school senior. Complete with Victorian-style street lighting, new trees and benches, and granite curbs, the redo should be finished by year’s end.

And then there’s City Place. In a stroke of savvy planning, the city used a Neighborhood Stabilization Project grant to purchase the once-blighted property — in a former life, a drug store that Mackenzie says an out-of-town landlord allowed to rot. The idea, he says, was to “grease the skids” for future development.

It worked. The city used part of the NSP grant to raze the building, and then put out a request for proposals from developers. The town even commissioned a conceptual design for a building, which included office space, some first-floor retail and the grocery store for which townspeople had long been clamoring.

Other projects are brewing, too. Last week, Granite City Developers closed on the Blanchard Block, which has sat empty for 10 years; the developers are expected to pump $3 million into redevelopment. The Central Vermont Community Action Council is moving its campus — and 100 jobs — to downtown Barre. And there’s talk of a new bike path that would connect Depot Square to the Vermont Granite Museum. Meanwhile, Lauzon boasts that Barre has led Washington County in starter-home purchases for the past eight months.

“Everyone wants in on the action,” Jones says. New businesses are starting to fill the once-empty storefronts, spurred by the prospect of an estimated 500 new workers (many at City Place) in the downtown within a year and a half. “It’s going to take a while for businesses to catch up with the demand that will bring,” Jones adds. “What a great problem to have.”

For the dreamers behind the Granite City Co-op, that influx of workers could be the ticket for sustaining a downtown grocery store.

“There’s a lot of work behind the scenes on making Barre a livable downtown,” says Jones. “A grocery store brings people to the downtown and helps out the other businesses,” he says. “It helps make the downtown more vibrant and alive.”