To Have and Have Knot | Essay | Seven Days | Vermont's Independent Voice

To Have and Have Knot

A view of marriage from both sides of the aisle 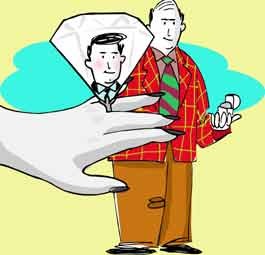 Marriage is a foreign country in which only two citizens speak the language, know the traditions and track the terrain. Others may occasionally gain passport privileges, but they'll never completely understand the customs, festivals and volatile economy of this shuttered land. For those of us who live in the Albania, if you will, of the married state - shivering outside in the gaily colored peasant clothing of the Unmarried Ones - this country is both beckoning and repellent.

While I can't speak for the men of my tribe, I do have some sense of the indecisive yearning many of my female compatriots share. We wanna be married; we don't wanna be married. Forget fickle: Think "undulating." That's how often we change our minds about the nature of wedded bliss.

Like many of you, I know about both bliss and not-bliss when it comes to death-do-you-part. But I never really understood the Big White Wedding. I get no kick from champagne, pouffy white gowns, rice or bird seed, netted Jordan almonds, calligraphy, flower children or the strange discovery of "personal colors." And I could never bring myself to force perfectly good female friends into the unlovely fit of peach satin, empire waist or capped sleeve.

I've searched my cold, narrow soul and nothing in it sparks at spending thousands of dollars - even someone else's - on a stiff, formal party dictated by arcane manners no one ordinarily uses or even fully understands. I like love and I like parties, but I haven't quite understood the, um, marriage of the two.

However, I do clearly see one unifying factor for women who share my uncanny gift for personal avarice: The Ring. Gimme-gimme.

Underscoring my lack of character, I probably wouldn't have consented to the short embarrassment of a civil ceremony - thrown my twenties away like an itchy garter belt and had two sons - if it weren't for the ring. My ex-husband was a diamond dealer then, which is like being a cocaine dealer except you have to pay taxes. Same little paper packets, same reverence for the white stuff inside, same gun at the ready.

He and a friend, an Israeli gem dealer with whom he lunched each week, could call to mind Diamonds They Had Known with the same misty sweetness that other men reserve for past lovers or the '67 World Series. And when he flashed a 3.8-carat diamond in a Tiffany setting my way, his head no longer seemed so bald, his politics so Republican, his clothes so Eastern bloc. I did the worst thing I could possibly do to him: I took it, and fast.

I couldn't put mascara on for weeks without poking myself in the eye, so drawn was I to the sight of the ring's brilliant glare in the bathroom mirror. Looked nice on the steering wheel, too, my left hand inexorably drifting the car to the right as I swerved through town blinded by the three C's of cut, clarity and carat. Tra la, it had happened - I was finally an adult woman with no eye makeup and a huge diamond, driving badly.

But that husband and I couldn't govern well, and ours soon became a Fourth World country with little culture and a terrible economy. I eventually staged a coup and fled to the veritable Bahamas of waiting tables, cleaning houses and being less furiously angry all the time. I spent months trying to sell the ring, which had, ironically and correctly, become a bad-luck totem of all the compressed coal of resentment, mistakes and waste our stewardship had wrought.

Never need to marry again, I chanted, pocketing the cash. Marriage is a covenant for producing children. Done the baby thing, got the kids. If it ain't for kids, marriage is for dummies. Dusting, bussing, vacuuming, doing windows, slinging risotto, all the while ha-ha-ha-ing it over my singular wisdom.

And then the unexpected happened: I fell in love - the real, actual, grown-up, not-for-diamonds way. Needless to say, I craftily kicked my own karma into place by falling for someone who was already married. Following the circular logic of the karmic wheel, his marriage certificate holds the seal of Ireland, therefore requiring some awkward Catholic maneuvering and lots more thousands of dollars to dissolve. Unless I'm sorely mistaken, that is not going to happen, and his marital country will continue, albeit without a king, all the way over in that other land of my ancestors. I'm OK about this, really. It matters not. Done the baby thing, right?

But damn, I look so good in white. I love Jordan almonds. Periwinkle blue is my personal color. Bird seed, c'est moi.

Our new country is a lush, grand place of thickly green hills, brilliant strange plants, a mellifluous language, a healthy GNP, sweet, curious customs and a vibrant culture. But its borders remain unsealed. Does it matter? Sometimes.

I still don't understand why exactly. It's as if we were married: The children call him their stepfather; the neighbors know he's in charge of the garbage cans; and he is in possession of the awful knowledge that I might occasionally make a delicate rasping noise which those of rougher character call "snoring."

Add this to love, monogamy, shared bank accounts, our mutual presence at teacher meetings and his acceptance of me typing this while wrapped in two bathrobes and my writing blankie - and you've got all the components of a marriage sans the catering bill.

Some would say that this is the perfect compromise. Most days I would agree. But there are legal challenges to consider. I don't want to tussle with the rightful Irish queen over his bones should he die first. (I'd like them hung in the bedroom where I could stroke them and hang the occasional scarf from them, and yes, I know this is illegal.)

On the other hand, I want to know that he can't get away from me without a huge scattering of paperwork. To have and to hold, you know. To sink claws into. Like that works. He wouldn't have crossed the chilly Atlantic if a few claws had the strength to stop him. Likewise, I wouldn't have found myself tableside in "the Bahamas." So why do I persist in this fruitless fantasy that a wedding and marriage would stop yearning in its tracks?

My mother says that we get all that we want from this life, just not necessarily when we need it. The steak arrives when you're toothless, the dessert when diabetic. I've been married - and I hated it. I'm unmarried - and I want it. The Irish, those jolly language lovers, have a word for this: eejit. You might better recognize its pronunciation on this side of the pond: idiot.

I have what I have, and consider myself damned lucky, too. I was quite happily resigned to folk dancing alone in Albania for the rest of my days when this great good sun suddenly broke upon me.

And make no mistake. Though there is no license, there is a ring. My "partner" - a formal term that suggests we sign off on a contract, shake hands and climb gravely into bed each night - gave me his grandmother's yellowy-pink Welsh gold wedding band as a sign of his fidelity. I took it, and fast. And this time, in accordance with our native traditions, you'll have to take my finger off to get it.