To Be Old, Gifted and Black

Theater Review: Having Our Say 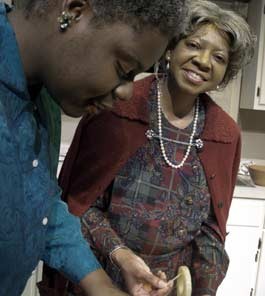 There are obvious reasons why, to many Vermonters, the words “civil rights” bring to mind “civil unions” more readily than, say, “racial equality.” After all, we’ve heard the one about Vermont being the “whitest” state in the country — a statement that may not be true and is itself considered racist by some people. But despite, or maybe because of, the state’s relatively homogeneous racial makeup, race discrimination does in fact happen here. According to Susan Sussman, a civil-rights consultant and former executive director of the Vermont Human Rights Commission, more than 50 cases of race discrimination were filed for unfair housing practices over a recent five-year period.

This fact, coupled with the hard lesson Vermonters learned about the polarizing effect of intolerance during the civil-unions debate, lends added relevance to Lost Nation Theater’s current run of Having Our Say. Presented in honor of Black History Month and right on the heels of Martin Luther King Jr. Day, Emily Mann’s play adapts the book of the same title about the real-life Delany sisters, whose respective lives spanned more than a century of American civil-rights history.

First produced in Princeton and then on Broadway in 1995, when Bessie and Sadie were still alive, the play features two actors sharing an extended family history reaching back to the slave era and forward to 1999, when the elder Sadie died at 109 years old. Bessie died four years early, at 104. Were that history not so remarkable, the very existence of the centenarian sisters would have been an important find — the civil-rights equivalent of King Tut’s tomb. In the Lost Nation production, however, Bessie and Sadie are no mere witnesses to history. The vitality they project, even in their final years, suggests the force of will that made them true agents of progress. The play, as a result, is both a living history lesson and a moving portrait of racial struggle.

The title of the play, Having Our Say, is a little misleading, for there’s nothing confrontational or polemical about this work, nothing that pounds its fist on the table and demands to be heard. On the contrary, part of the play’s magic is its disarming approach. In the first act, we’re invited to tea with the sisters — addressed by Sadie directly, in fact, from the sofa in her warm, tidy parlor. Throughout the play she speaks to the audience directly, sometimes as “you,” sometimes as “child.” While this technique does not remove the barrier between actor and audience — nice try, though — it does establish the terms of our theatrical relationship: We’ll listen as these two old ladies tell us stories. The strategy is a bold choice, for the play promises to be short on showing and long on telling.

Several factors combine, under Lisa Tromovitch’s capable direction, to transform what could have been a static narrative into a vibrant piece of dramatic storytelling. First, as Sadie and Bessie thumb through family photo albums in the first act, projections of real Delany family photos appear above the set. On loan from the collection used in the original Princeton production, the images have a documentary effect that engender feeling for the fictional figures on stage. That the play is also divided into three short acts, with intermissions, keeps it moving.

Ultimately, though, it’s superb acting that accomplishes the formidable task of capturing and maintaining interest. Although Lisa Gaye Dixon and Debrah Ellen Waller are nowhere near 100, and are not made to look that way, both actors possess such engaging stage presence that their physical characteristics do not inhibit fully realized portrayals. There’s no doubt they have experienced everything they describe in the course of the play.

Dixon’s Bessie is forthright and unwavering in her interpretation of their shared history. She’s a somewhat combative figure who, we’re given to believe, came about her education and achievements by never taking no for an answer. At times imposing and intimidating, Bessie is also very funny, punctuating the cleverness of her deeds with an infectiously sly private laugh.

As Sadie, Waller strikes a radically different pose. Delivering her lines in a softer, faintly warbling tone, she evokes the good that comes to those who look for the good in others. But Waller’s Sadie, too, has a wily side, which contrasts amusingly with her almost hypnotic gentleness.

One of the more impressive achievements of this production is its sisterly rapport. Whether sitting at the dining room table or preparing a meal together, the two actors move and gesture in ways that subtly evoke the familiarity of women who have spent the better part of a century under the same roof. Along the way, their characters emerge as two contrasting sides of the civil-rights movement.

Describing themselves early in the play as “molasses” — that’s Sadie’s sweet disposition — and “vinegar,” denoting Bessie’s irascibility, each sister later distinguishes herself as being more like Booker T. Washington or W.E.B. DuBois. Sadie can accept the more conciliatory approach to civil rights that Washington pursued, while DuBois’ more revolutionary initiatives are a closer match with Bessie’s drive for total equality.

Beyond this symbolism, historical and personal events literally intertwine for some very dramatic moments. Though they were born roughly three decades after the end of the Civil War, the Delany sisters witnessed the lingering poverty into which many slaves had been freed, and the racist horrors that would persist throughout the 20th century. The actors seem to ache while describing the changes that Jim Crow “separate but equal” laws wrought in the most routine aspects of their lives. The sisters recall the lynchings that were common throughout the segregationist South — and that almost claimed a young Bessie Delany when she talked back to a drunk white man in a Georgia train station.

Some of the sisters’ reflections are more trivial — there’s a bit of name-dropping from their years at the center of the Harlem Renaissance — while others add obscure footnotes to racial history. In one illuminating aside, Bessie explains why she prefers to be called “Colored” or “Negro,” not “black” or “African-American.”

Having Our Say may seem, on the surface, an odd choice for Vermont audiences. After all, were we not the first U.S. territory to abolish slavery, back in 1777? What do we need to hear this for? The state’s civil-rights record may offer an unflattering answer, particularly in the present moment, as Vermont becomes more diverse and its natives confront assumptions born and bred in these homogeneous hills. Or did the darker days of the civil-unions debate not teach us a thing or two about our capacity for intolerance?

Having Our Say merely confirms a great lesson from our recent civil-rights history: There’s still much more to learn — about difference, race and living with dignity.

In conjunction with Having Our Say, Lost Nation Theater is sponsoring open community forums on Jan. 27 and Feb. 3. Info, 229-0492.