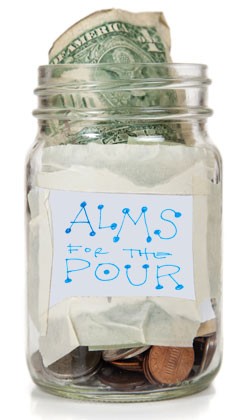 Every time my family goes out to dinner, the same scenario plays out in the restaurant. After we’ve finished our meal and the bill arrives, my father reaches for his money clip. (Yes, he uses a money clip. He’s fancy like that.) If the meal isn’t, say, $300 or more, my brother or I will offer to pay the tip.

Having long ago realized that our father would never allow us to foot the dinner bill ourselves, we no longer even offer to split the cost. But paying the tip, we reason, is a sensible compromise. We’re both adults and we should pay our share, or at least part of it.

Typically, though, my father will hear none of it, as if somehow our contribution would amount to an indictment of his financial fitness. So he thanks us for offering and then says he’s happy to pay. He shuffles around some bills while my brother and I quickly tally the tip in our heads. This last maneuver is essential because, you see, my father isn’t a great tipper.

He is many things, including highly entertaining, intellectually curious and generous to a fault. But when it comes to tipping, he’s strictly a 15 percent kind of guy. And this makes my brother and me bristle.

There’s nothing inherently wrong with tipping at the low end of the accepted scale. It just gives the impression that you’re cheap. Or that you don’t really understand how hard it is to make a living in the service industry, especially for tipped wageworkers like waitstaff.

My brother and I are especially sensitive to this. While my waitress days were numbered after one long, miserable summer spent schlepping pasta and pizza to tables of entitled suburbanites, my brother works at an upscale beer bar in Washington, D.C. He relies almost exclusively on tips for his rent, utilities and other expenses.

So we both get how important it is to tip at the top of the scale. And that’s why we have to supplement my father’s offering. After he puts the money on the table and we all stand up to go, through some sort of sibling telekinesis my brother and I determine who is going to beef up the tip. If it’s me, I’ll walk out with the family, then duck back in, claiming I forgot something. Then I’ll throw a few more dollars in the pile — enough to bring the tip total to 20 percent, and sometimes more, depending on whether I know people who work at the restaurant, or if the server acted charmed by my dad’s jokes.

This secret tip-enhancement operation underscores one undeniable fact about gratuity giving in our society: It’s hard to do it right. How many times have you stood before a tip jar at the counter of a coffee shop, buffet or even a dry cleaner and wondered what you were supposed to do? How often have you picked up take-out food and puzzled over appropriate tipping etiquette? What about when an attendant hands you a towel in a ritzy bistro bathroom, or a hotel doorman hails you a cab in the rain?

Those of us who want to do the right thing can be grateful that the Emily Post Institute — based in Burlington, Vt. — offers a raft of advice on the topic of tipping. I put my familial quandary to Daniel Post Senning, the great-great-grandson of etiquette maven Emily Post and spokesperson for the nation’s foremost authority on manners. He had much to say on the subject.

“When you tip at the absolute minimum, you’re communicating that the person has met their minimum requirement. But it doesn’t communicate a generosity of spirit,” Senning says. “It just says you’ve upheld your end of the social contract.”

He goes on to suggest that, rather than thinking about tipping as an obligation, we should consider it an opportunity to express gratitude. A tip, Senning says, is really about thanking people for the service they’re providing, be it shining your shoes or vacuuming your hotel room every day.

As a rule, when Senning is out to dinner, he calculates the tip thusly: He looks at the bill and moves the decimal point over one place to the left, doubles the amount and then rounds up. That’s typically on the posttax total, which means that servers must love Senning. The only time you would tip on the pretax amount rather than the total, he says, is when you’re using the corporate credit card and the bill is hovering in the $1000 range. Then the tax makes a difference — especially to the company footing the bill.

A tip that’s less than 20 percent sends a message to servers, but it might not be the one the customer intended to convey, Senning notes. It says, “I’m cheap,” rather than “I had OK service this evening, but it wasn’t great.”

Most restaurant servers interviewed for this story said the same thing: If they get a bad tip — and most consider a bad tip anything less than 18 percent — it’s clearly because the diner was stingy (or older), and not necessarily because they received bad service.

Much low-end tipping is generational and not a reflection of the service provided, servers say. That’s the case with my father. At least anecdotally, younger people tend to tip better, especially those who have worked in restaurants or have friends who do.

But how do you send a message that the server was inattentive, clumsy or even rude if not through your tip? Senning advises that if the service is so bad you feel the need to undertip or even leave no tip at all, you should talk to the manager. Perhaps your issues with the service were beyond the server’s control. The front of the house could be short staffed or the kitchen could have a new cook; the manager would be able to explain that to you.

Restaurants are not the only places where tipping can pose an etiquette challenge. What about all those tip jars with the clever signs attached — “Alms for the Pour,” “Support Counter Intelligence,” etc.? If you’re buying a $2 coffee, do you need to put money in the jar? If so, how much?

Senning says that, while a tip jar is a nice modern tradition, there is no obligation to contribute to it. If the person behind the counter goes above and beyond for you — by giving you an extra scoop of ice cream on your cone, say — then go ahead and toss in a dollar or two. Or, if the person remembers that every other Tuesday morning you want a double red eye with soymilk, maybe a little thanks in the form of legal tender is in order.

As the service sector of our economy grows, tipping culture will likely change with it, Senning predicts. He sees the U.S. moving to a more western-European style of tipping, where the gratuity is never more than 10 percent and often not expected. That’s assuming states continue to move in the direction of mandating a minimum wage for all employees, including restaurant workers.

That shift would be welcome news to my brother and me. Then my father’s 15 percent gratuity would make him the biggest tipper in the joint.

Host or maitre d’ — No obligation for greeting you and showing you to your table. $10-$20 for going above and beyond to find you a table on a busy night or on occasion, if you are a regular patron.

Tipping jars — No obligation. Tip occasionally if your server or barista provides a little something extra, or if you’re a regular customer.

Restroom attendant — 50¢-$3, depending on the level of service.

Bellhop — $2 first bag, $1 per additional bag. $2-$3 for each additional service, such as room delivery.

Housekeeper — $2-$5 per day, left daily with a note marked “Housekeeping — Thank you.”

Hair salon — 15-20 percent; ask to split it among those who served you.