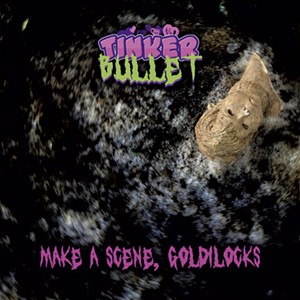 Certain Vermont musicians participate in so many projects at once that it's honestly hard to figure out what they're up to at any given time. Kiel Alarcón is one of those. The cofounder of Windsor music collective What Doth Life, Alarcón plays in an assortment of bands, including the Pilgrims, Carton, and Derek and the Demons.

The trio's debut EP, Make a Scene, Goldilocks, has a harder edge than playful pop-punk. The recording comes raging out of the speaker with "Throw One," a sub-three-minute blast of aggression that starts with the iconic line "Don't want to start a riot / But it just got quiet again." Selover shreds a frenetic guitar riff while Boxall and Alarcón chug along at a fiery pace.

"Secret Skin" slows down to an ominous drone, as Selover sings of hidden shame and gives a shout-out to Satan's daughter. This track has the feel of early Danzig albums, all low-fi gothic rock with lyrics that could equally be about psychological issues and horror films. Most of Tinkerbullet's lyrics deal with genderqueer identity, and here Selover explores complex themes by mixing directness with a subtle sort of artistic license, introspection with raw emotion.

The EP's strongest cut, "Mannequin," features a massive guitar riff. One of the area's best drummers, Boxall lets loose on her kit and drives the song with raw, unbridled energy.

"I can't be myself with you / A whiskey blanket, a coat of beer / That's what I need to be a man, I fear," Selover sings as the band speeds along like an out-of-control freight train.

The rage subsides into self-loathing by the final track, "Goldilocks." With shifting dynamics and a plaintive melody, the song captures that awful emotional state of the immediate aftermath of getting dumped — a combination of anger and acceptance. Selover expresses the desire to be better for a partner even as she begins to suspect it doesn't matter.

"What if you like me fine at first?" she asks. "But then you see me unrehearsed?"

The song cements our sense of the EP overall — an exploration of messy, lovesick passion and power. Tinkerbullet have no problem showing you their bloody, beating heart, but they're not here for a pity party. They're here to rock, which they do ably over the course of the four-song recording.

While the EP's production leaves a little to be desired, its punky, DIY edge fits this raw but promising record of intelligently written hard rock songs.