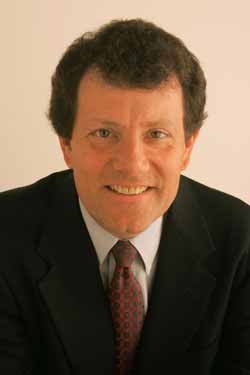 BURLINGTON — Nicholas Kristof is a two-time Pulitzer Prize-winning columnist with The New York Times. In 1990, he and his wife, Sheryl WuDunn, became the first married couple to win a Pulitzer for their coverage of China’s Tiananmen Square pro-democracy movement. According to his Times biography, Kristof has lived on four continents and reported from six. In his efforts to shine a spotlight on global poverty, health care, human trafficking and the sex trades, he has survived wars, malaria, an African plane crash and mobs carrying heads on pikes.

Kristof and WuDunn are now writing their third book, due out late next year. It centers on the struggles of women in the developing world. Seven Days interviewed Kristof by phone last week in advance of his upcoming talk at UVM, entitled “The Promise and Price of Modernization in China.”

SEVEN DAYS: Was your new book inspired in part by your time in China?

NICHOLAS KRISTOF: Sure. A hundred years ago there was probably no worse place to be born a woman. These days, the change has been just extraordinary. It’s one of the more egalitarian countries in the world. In Chinese cities, husbands and wives tend to divide household chores more equitably than Americans, who are pretty enlightened. I think that move toward gender equality is one reason why China has been booming economically.

SD: Is this a recent development?

NK: It’s been happening over time. The first step was no longer binding women’s feet, which basically crippled half their population. That stopped pretty much in the early part of the 20th century. Child marriages were ending in the 1940s and ’50s, and education was spreading . . . The upshot was that the country took girls from villages . . . [the girls] were educated and autonomous enough that they could move to the cities and work in factories and suddenly contribute significantly and make shirts, and toys, and chips that end up in Wal-Mart.

NK: There’s still a preference for sons in the country. In general, males tend to get preference in the job market and so on, but it’s much better than it used to be. A hundred years ago, a lot of girls in rural areas didn’t even get names. They’d be called “third daughter.” So compared to that, the progress has been extraordinary.

SD: The recent Times article about the extent of environmental degradation in China was really disturbing.

NK: It really is astonishing. The first wave of environmental pollution in China was dirtying up China itself. But gradually, China’s industrialization is also affecting the global pollution, with carbon emissions and acid rain landing on the West Coast of the U.S.

SD: Does China’s population grasp the extent to which their rampant growth threatens their own survival?

NK: Not as much as in the West, especially in rural areas . . . but there is a real awareness of local environmental problems. Farmers increasingly get really angry because some factory upriver is going to dump some kind of pollution into a water source for their livestock, and all their pigs are going to die . . . There’s been a really interesting shift, maybe one of the most important changes in China in the last half-dozen years. Protests increasingly are tolerated, as long as they don’t call for the overthrow of the Communist Party . . . By official count, there are about 80,000 of these protests a year around China. It makes the government nervous, and I think it should. The dynamic is changing and people used to be more scared of the government than it was of them. Now, I think it’s the other way around.

SD: Do you see China embracing an environmental ethic? If their government decided tomorrow that everyone had to use compact fluorescent light bulbs, they’d have them.

NK: You’re absolutely right . . . The people running the country aren’t really politicians, they’re basically engineers, and in some ways, they’re prepared to look at the future and make cost-benefit decisions that would lead them to install low-energy light bulbs all around the country.

SD: In your 1995 book China Wakes, you paint a pretty dismal portrait of life for millions of Chinese. And yet, the book ends on an optimistic note. Are you still optimistic about China’s future?

NK: Yeah, I am. I think China is recovering its historic position as the most important country in the world. But I also think there’s a real risk of violent protests, of major conflicts and upheavals, maybe even a coup d’état. And I don’t think Americans, at least the China enthusiasts, adequately appreciate those risks. I also think the China economic model, for now, is running out of steam a little bit, and that growth rates will probably tend to subside.

SD: You’ve been criticized for blurring the line between journalism and advocacy. Is it difficult to draw a clear distinction between the two?

NK: There is a fine line there. On issues of say, genocide, I’m probably more likely to take the risk of advocacy than I am, say, on social security reform. But there are genuine tensions between journalism and advocacy. Buying Cambodian sex slaves is not a traditional journalistic practice.

[In January 2004, Kristof wrote about how he “purchased” the freedom of two teen prostitutes, one of whom later returned to the brothel.]

SD: Does the Times give you free rein about where you go and what you write about?

SD: What do you consider your greatest professional success in terms of effecting change from a story you’ve written?

NK: Back in the mid-1990s, I wrote a two-article series about global health problems. It appeared just as Bill Gates was trying to figure out what to do with his new foundation. He credits the second article in that series, particularly a chart that accompanied it, with directing his foundation towards public health. That one reader of one article with one chart has probably had more impact than anything else I’ve ever done. But Darfur also feels like a success in terms of getting people to face up to a problem. I wish we had done more, but there are hundreds of thousands of people who are alive today who wouldn’t have been if we had done even less.