January 14: "Ol' Bernardo's emergence on Capitol Hill as an effective and outspoken coalition builder was the biggest unheralded news story of '97," writes Peter Freyne in Inside Track. In Rhythm & News, Pamela Polston notes the opening of Burlington bar Red Square. "Nothin' like a new venue in town to shake things up."

January 26: Bill Clinton makes a statement on national TV that "I did not have sexual relations with that woman, Miss Lewinsky."

January 27: Hillary Clinton describes attacks on her husband as part of a "vast, right-wing conspiracy."

February 4: Seven Days publishes the first in a series of monthly restaurant reviews by nationally known critic Marialisa Calta of Calais. Of Asiago Wood Grill & Noodle Bar Bistro in Stowe, she writes: "I tend to judge restaurants on how they treat vegetarians, and Asiago came through with flying colors."

February 11: The "shocking results" of Seven Days first sex survey reveal Vermonters have a thing for TV weathermen. Which politician do Vermonters most want to bang? Howard Dean. Seven Days adds a new comic, "Troubletown," by Lloyd Dangle, and a crossword puzzle.

February 18: Seven Days gets its own domain name: sevendaysvt.com.

March 25: Pamela Polston reports in Rhythm & News that Agents of Good Roots will play the grand opening of Higher Ground on April 15 in Winooski.

April 8: In Crank Call, Peter Kurth laments the imminent closing of Burlington bookstore Chassman & Bem. "What's going on in Burlington bookstores is just a miniature reflection of the new order, where what you know, what you learn and what you read are determined almost entirely by corporate interests."

May 6: Jeanne Keller debuts a new monthly column, Real Ville Montréal, with insider information "to help you look less like a tourist."

July 1: Kimberly Jones wins the Seven Days Emerging Writers Contest, and her short story, "Falling," is the centerpiece of the double Summer Reading Issue. Paula Routly compiles 63 of the state's published authors in a guide to local literati.

September 9: Seven Days unveils a redesign in its third anniversary issue, which includes "The Question," a new feature in which random people respond to a random query. Diane Sullivan, a salesperson at Burlington's Feet Street, is one of three locals who answer the first question, "What is Labor Day?" She later comes to work at Seven Days. 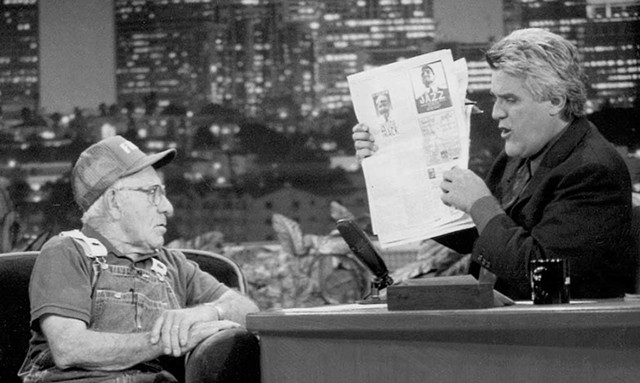 November 4: In Back Talk, Paula Routly notes Fred Tuttle's appearance on the "Tonight Show," during which he held up a copy of Seven Days to show his sole campaign ad.

November 18: In "Bread Head," Molly Stevens raves about Gérard Rubaud's uncommonly good loafs. "Gérard's bread may appear under-dressed, but the experience of eating it is a revelation."

December 9: In Rhythm & News, Pamela Polston writes: "Now that Dennis Wygmans has confirmed the imminent sale of Club Toast to Club Extreme, everyone is getting all misty-eyed about their 'last gig at Toast' this month."