January 17: Seven Days launches its personal ads with a live Dating Game promotion. It runs every Wednesday night for 13 weeks at upstairs Nectar's. 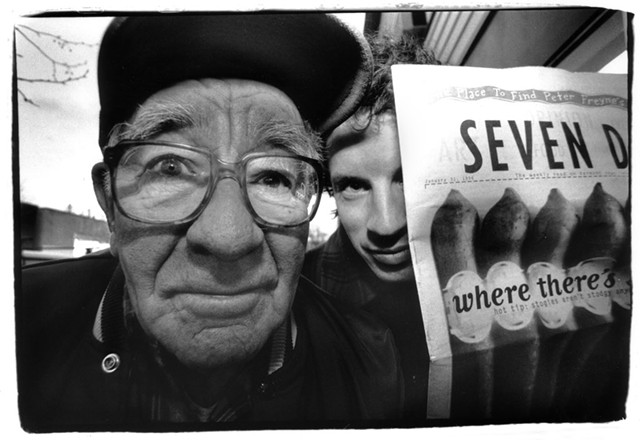 January 31: In "Winning Ticket," Paula Routly gives a thumbs up to A Man With a Plan, John O'Brien's mockumentary about dairy farmer Fred Tuttle and his fictional campaign for office.

March 6: A cover story by Peter Freyne looks at a lawsuit against Vermont's largest daily newspaper, subtitled, "Paul Teetor takes on the Burlington Free Press in a landmark case about race, truth and political correctness." In "Downtown Doldrums," Kevin J. Kelley marvels at all the chain stores on Burlington's Church Street Marketplace. "Are there enough high-end shoppers to support still more glitz and chintz?"

April 10: In "Down by the Riverside: Winooski Puts Its Money Where Its Mills Were," Kevin J. Kelley describes the Onion City's plans to build a Riverwalk and revitalize its downtown.

May 22: Pamela Polston dips a toe in Lake Champlain and comes out with "Interview With a Zebra Mussel." Paula Routly writes about learning to rollerblade in the same issue.

June 5: Seven Days publishes the first installment of its short-lived music quarterly, 4/4, with a story on the 15th anniversary of punk club 242 Main and a comic by James Kochalka.

September 4: In "Back Talk," Paula Routly reports: "Bernie Sanders was also in the national news last week. The congressman got written up in the New York Times for playing the rear end of a tiger in Bread and Puppet's annual Domestic Resurrection Circus."

September 9: In honor of the paper's first anniversary, Burlington Mayor Peter Clavelle issues a proclamation and calls Seven Days a "must read."

October 16: Peter Freyne reveals family secrets in the cover story, "Portrait of an Assassin: Terrorist-hero Michael Collins stirs up reel-life memories for one Irish-American lad." He writes, "My father rarely spoke of his early years carrying out the orders of Michael Collins, and when he did it was in hushed tones."