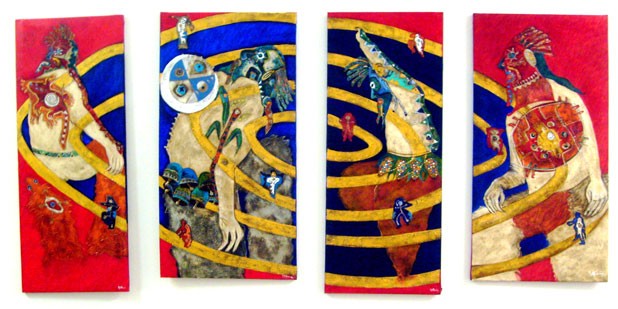 The Kichwa, indigenous people of the Andes, have maintained deep connections to their ancient culture despite 500 years of Catholicism and Western dominance. “Mushuk Pacha | Nuevos Tiempos | New Times” is a sprawling exhibition of paintings at Burlington’s Flynndog gallery by Kichwa Ecuadorians Inty and Yauri Muenala Vega. The artists use traditional colors and symbols to depict their culture’s contemporary vibrancy. True to the “new times” referenced in the title, the brothers Muenala Vega are contemporary painters, and are masterful artists of international renown.

One of the most impressive works is “Kapak Nan (Camino de la Justicia)” by Yauri. The roughly 84-by-46-inch, four-paneled piece is composed around a golden swirl representing Lake Titicaca. Dancers, like Incan gods, flank the symbolically rich scene.

Vermont writer Anahí Costa, originally from Ecuador, insightfully noted in Artseenvt.com, “Around the Lake Titicaca four danzantes (dancers) correspond to the four Raymis of the year: Pawkar Raymi, Inty Raymi, Sara Raymi and Kapac Raymi (dates coincide with solstices and equinoxes). Two of the dancers call special attention: The first one wears a belt decorated with corncobs representing ancestral beliefs. The second wears bells on his belt signifying individuality; the freedom to choose a different belief.”

Another Yauri piece “Pachataway (Tejiendo el tiempo … Espacio … la vida)” is a pair of horizontally oriented, 10-by-29-inch panels. Bulls with lively patterning are depicted crossing through a shallow field of deep indigo. Both of the Muenala Vegas employ heavily textured underpaintings scumbled over with orange, reds, yellows and other richly saturated hues.

The 12-by-12-inch “Katary (Levantares)” by Inty is a simple solar disk with a gold face and round turquoise mouth. His 20-by-47-inch “Kichwa Runa (Personas Kichwa)” includes other forms, such as the back of a woman with a long braid, in a grouping of three squares aligned vertically. Both are highly decorative pieces. Among Inty’s other works are paintings of interlocking fish, more women with braids, and small groups of figures. His “Pachakamak (Tiempo)” is a more symbolic 39-by 52-inch canvas. Pictographic figures drawn with lines dance across the top of the image, and an open palm with a swirl icon appears at the center of the piece.

The monumental “Chusango Enamorado,” at 66 by 50 inches, is an abstraction with a hulking copper and red form in its center, surrounded by an atmosphere of rough white layers of acrylic. Arrows and hash marks populate the canvas with ambiguous meanings, like a secret narrative known only to the artist.

In addition to the paintings, the exhibit includes a large installation. “Cruz del sur (Chacana)” consists of a rough circle of dirt with a triangle marked by candles, and a suspended dream-catcher construction consisting of white strips of cloth. This reportedly represents the spiral of time. Curator Bren Alvarez notes in a written statement that “Cruz del sur (Chacana)” is “a sacred figure that represents the Kichwa world vision.” But it’s not wholly traditional. Due to importation restrictions, it was created with Vermont earth instead of Ecuadorian corn.

The run of “Mushuk Pacha | Nuevos Tiempos | New Times” has been extended through February, so there’s plenty of time to catch this unusual exhibition. The pieces are enjoyable even if you don’t try to decipher the mysterious images and translate all the titles. Still, given the expressiveness of the myths and stories, the effort is surely worthwhile.