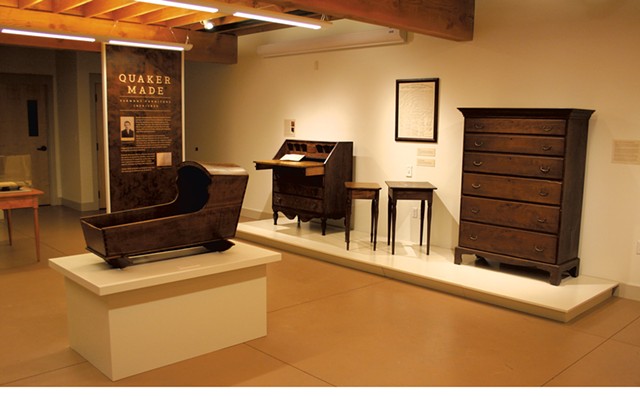 Through their commitment to dressing plainly and living simply, the Quakers quietly rebuke contemporary America's blinged-out culture. A corresponding aesthetic of restraint sets Quaker makers far apart from most practitioners in today's art world, which spins on an axis of extravagance.

Crafting austere everyday objects isn't a recent innovation by the Society of Friends. Quaker designers and builders have been doing it for a long time, as a show at Rokeby Museum in Ferrisburgh reveals.

Stephen Foster Stevens (1799-1857), a Quaker furniture maker who worked in Monkton, was producing beautifully simple — and simply beautiful — pieces nearly 200 years ago. A half dozen of them are on display in the Rokeby exhibit titled "Quaker Made: Vermont Furniture, 1820-1835."

Stevens moved to Monkton from his parents' home in Montpelier because Addison County was the heart of Quaker Vermont in the early 19th century. He found a strong market there for pieces that would not have generated much demand in hipper parts of New England. Thomas Robinson, the patriarch of an abolitionist family who built Rokeby in 1793, was himself a Quaker and purchased some of Stevens' products.

Among the pieces in "Quaker Made" is a wooden frame for a declaration published by the American Anti-Slavery Society in 1833. Rokeby's appropriately simple show also presents a few 19th-century photographs and a sampling of Stevens' account books and diaries.

A bureau he made in 1826 is cited as especially indicative of Stevens' disdain for fashion, "the most imperious of despotisms," according to an unnamed Quaker author quoted in a text panel. This cherry-wood piece, with six drawers graduated in size from top to bottom, was modeled on a type of bureau that had become prevalent in Vermont 30 years earlier.

"Any customer wishing to avoid the latest fashion would be safe in Stevens' shop," notes an accompanying commentary by curator and Rokeby director Jane Williamson. But, she adds, that customer could acquire "a well-made and handsome piece of furniture."

A hooded cradle serves as a fine example of Stevens' exacting workmanship. It's a practical and demonstrably durable object with a visual appeal based on the absence of ornamentation. The cradle's design is simple yet not at all simplistic. Its integrity derives from its maker's uncompromising commitment to his craft.

As Williamson observes in a text panel, "To produce inferior work would have troubled Stevens, seeming almost a form of dishonesty."

Not every piece in the show is devoid of flourish. A desk Stevens built in 1820 qualifies, Rokeby's director writes, as "the most complicated piece of furniture in the museum's collection." A swooping base and four oddly shaped feet complement its boldly figured maple top. Similarly, a small trunk made for Ann King, a teacher employed by the Robinsons, is emblazoned with her initials in brass tacks — a 19th-century equivalent of neon signage.

For all its conformity to the Quaker credo of plainness, Stevens' work cannot be regarded as representative of a singular Quaker aesthetic. The style of furniture made by Quaker craftsmen varied from place to place, or meeting to meeting — the sect's term for its congregations. The Rokeby show includes a photo of a comparatively rococo piece made in Baltimore by a contemporary of Stevens who was every bit as much a Quaker.

Many viewers may identify Stevens' furniture as Shaker because of its clean lines and austere facture. There are, in fact, strong similarities between his work and that of the Shakers, whose origins lie in the Quaker tradition.

The Addison County meeting to which Stevens belonged was quite strict in its interpretation of the Quaker code of behavior and expression. Several congregants were "disowned" — or banished — from that meeting for not fully adhering to its definition of plainness, Williamson notes.

Stevens' obeisance to authority extended to his family life. His aged parents summoned him to return to Montpelier in 1835 to care for them and oversee their business affairs. He complied with their command, although he was "heartbroken" to leave his Monkton workshop, Williamson reports. While Stevens appears not to have excelled as a furniture maker after the move, his irrepressibly creative disposition still manifested itself — in his 1845 patent for a platform scale.