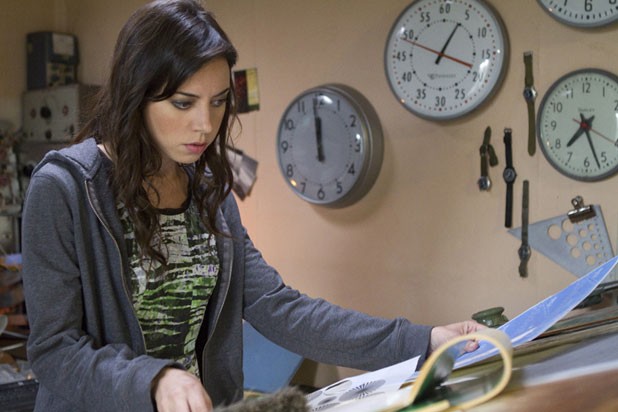 Safety Not Guaranteed, an indie drama with national buzz directed by Burlington resident Colin Trevorrow, hits the Palace 9 Cinemas this Thursday. Starring Aubrey Plaza and Mark Duplass, the film is based on an internet meme that, like all memes, traveled a bizarre route to fame.

It started in 1997, when John Silveira, an editor of Backwoods Home Magazine, needed to fill classified-ad space. So he dashed off a whimsical appeal: “WANTED: Somebody to go back in time with me. This is not a joke...” After specifying a California PO box, the ad warned: “Must bring your own weapons. Safety not guaranteed. I have only done this once before.”

Over the years that followed, Silveira received more than a thousand responses “from every state and every continent, including Antarctica,” he wrote when he finally outed himself as the ad’s author in BHM. Other pranksters appropriated the “time travel ad”; it was read on talk shows and became an internet fixture. Judging by the hopeful letters Silveira received, people wanted it to be true.

For screenwriter Derek Connolly, it was inspiration. He drafted a script based on the meme and showed it to his friend Trevorrow, who would eventually direct Safety Not Guaranteed for the big screen.

But first, the two wanted to secure permission from the ad’s creator. “We really didn’t know” the story behind it, says the 35-year-old director, who has lived in Burlington with his family since 2008. “It was a mystery. I could completely see someone writing that and being very serious.”

As luck would have it, Silveira unveiled himself in late 2010, shortly before Safety was scheduled for production, “not knowing we were looking for him,” says Trevorrow. The director met Silveira at a restaurant in New Hampshire — a one-of-a-kind encounter he later recounted on the Wall Street Journal’s Speakeasy blog.

By the end of their conversation, Silveira — a “committed Libertarian,” gun enthusiast and unpublished novelist — was on board with the movie. He joined the filmmakers at last January’s Sundance Film Festival, where Safety Not Guaranteed played to enthusiastic crowds and won Connolly a screenwriting award.

In the film, the would-be time traveler is played by Duplass, who’s also a noted young director (Cyrus; Jeff, Who Lives at Home) and who executive-produced Safety. But we don’t meet his character immediately. The story follows a student intern played by Plaza (the stone-faced April of NBC’s “Parks and Recreation”) as she shadows a Seattle journalist who plans to track down the ad’s creator.

Plaza’s boss (Jake M. Johnson of “New Girl”) doesn’t care about the story; he’s merely using the road trip as a pretext to reconnect with an old flame (another kind of time travel). He instructs his intern to pose as a potential time-travel companion, hoping the eccentric will succumb to her grumpy charms. That’s what happens — with unexpected consequences.

While the film is both a comedy and a love story, it’s not really a “romantic comedy,” in Trevorrow’s view. Safety’s central question, he says, is “Is this guy crazy? Are we dealing with time travel, or with insanity?” It’s a question that’s not resolved till the final moments. Trevorrow calls the ending that he and Connolly ultimately chose (they filmed two) “risky. The movie wasn’t necessarily leading to that point,” he says. But, “because it’s a small film, we didn’t have to make a market-driven decision.”

Trevorrow and his crew shot the film in Washington state in May 2011 for under a million dollars, using a state-of-the-art digital camera (the Sony F3) with “old lenses from the ’70s and ’80s,” he says. “We wanted it to look like you were sort of visually traveling in time to what an indie film looked like in the 1980s.”

While production was ramping up, Trevorrow met Guster lead singer — and Williston resident — Ryan Miller, who ended up writing the film’s soundtrack. He’ll attend a special Thursday-night screening with Trevorrow, who says he pulled strings to get Safety released in Burlington’s small market.

Trevorrow’s name has been attached to big-budget studio projects in the past, but he can’t reveal which, if any, are going forward. What he can say is that, while some Hollywood types may view Vermont as the edge of the civilized world, he believes “there are a lot of smart young creatives in the city right now doing stuff. It’s possible to live in what I think is a great, invigorating place ... and still do great work,” he says.

And, if there’s any place apt to embrace a lovelorn, weapon-toting, DIY time-machine builder, it’s Vermont.

Vermont premiere of "Safety Not Guaranteed," followed by a Q&A with Colin Trevorrow and Ryan Miller. Thursday, June 21, 7 p.m. at the Palace 9 Cinemas, South Burlington. Regular admission. The film begins its regular run on Friday.