Thanksgiving dinner is by far my favorite meal to cook. Putting aside the colonialist myths attached to the holiday (or tackling them head-on in heated conversations with family members, depending on how much wine I've had), I look forward to the combo of turkey, root vegetables, cranberries and stuffing all year.

I approach the challenge of choreographing the cooking times and temperatures with gusto: roasting a big bird; whipping up casseroles with nostalgia value; mashing, roasting and sometimes grilling vegetables; and making rich, perfectly thickened gravy from scratch. My long list of go-to seasonal and local ingredients includes cranberries from Vermont Cranberry, Nomadic Kitchen marshmallows to top the boozy sweet potatoes, cans and bottles from Eden Specialty Ciders — some to cook with, some to drink — and a turkey from Maple Wind Farm.

Making everything from scratch feels like a lot for this second pandemic Thanksgiving, however. So this year, I'm embracing a bit of help. Not surprisingly, Vermont's food and drink producers are on top of holiday-appropriate time-saving hacks. Here are three Small Pleasures to help speed up prep and lessen the stress.

My family's Thanksgiving has always been a two-stuffing affair: one batch of the boxed stuff, and one batch that starts the day before the meal with bread loaves being ripped into tiny, craggy pieces.

Letting the bread dry out ahead of time is the key to made-from-scratch stuffing. The stale-ish bread soaks up the recipe's fat and flavor to produce a mixture that's crunchy and chewy without veering into soggy.

More than once, though, in the frenzy of Wednesday night kitchen prep, I've forgotten to tear the bread and leave it out on the counter. In the bread aisle last week, I spotted a solution: La Panciata's stuffing mix.

The Northfield bakery's cinnamon-raisin bread has long been part of my sweet-and-savory stuffing recipe, but I'd never seen the 10-ounce burgundy stuffing bags. There they were — in rosemary-garlic and traditional sage — to save the day, or at least a whole bunch of time.

La Panciata wholesales its Honey & Oats, Pane Siciliano and other Italian-style loaves from Swanton to Springfield. The stuffing mix has been around for a while, co-owner Justin Loati said, but the bakery has been slowly expanding its distribution.

"The stuffing was a popular-demand thing," Loati said. La Panciata offers the seasonal product from late fall until early in the New Year. "Some people stock up, though," he added, noting that the mix has a six-month shelf life.

Loati and his wife, Bonka Loati, purchased La Panciata in 2016 from his parents, who started the business in 1992. The elder Loatis chose the stuffing flavors.

"The traditional sage was kind of a no-brainer," Loati said. "That's what everybody's looking for." The rosemary-garlic "was more of a family preference."

Eight or nine different breads go into the stuffing, providing a variety of flavors and textures. The spice comes in a separate packet within the bag so that customers can season to preference. The family's go-to stuffing recipe — printed on the bag — calls for stove-top preparation.

Loati noted that the crouton-like pieces also make a good topping for French onion soup. "I've also taken a wine bottle to the bag and crushed it up so you have a multi-bread bread crumb," he said. "It makes an amazing coating for pork chops and fish."

I plan to use the mix as a base for this year's stuffing — a compromise between boxed and from-scratch. I'll add onion, sausage and maybe apple. And I'll be thrilled that I didn't have to rip up the bread myself. 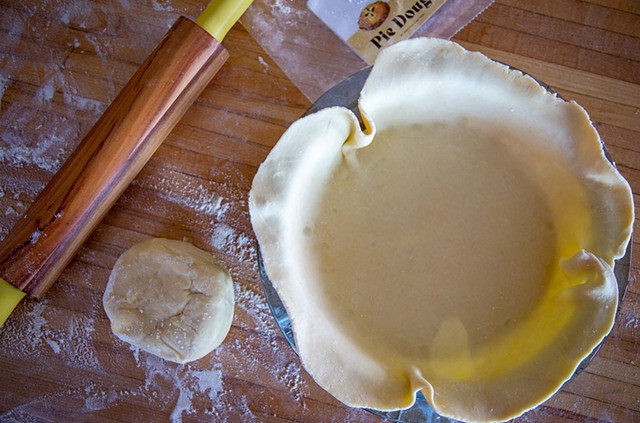 I hate making pie dough. Something about it never quite works for me; even when it feels like it's coming together, the final result goes poof into a million pieces. I keep trying, but I always have a bag of Mirabelles Bakery dough stashed in the freezer in case of emergency.

"It's pie dough every day right now," Lane said as she stepped out of the production space on Williston Road in South Burlington.

She and co-owner Andrew Silva moved the bakery from its longtime Main Street Burlington location to its current home in early 2020. They sold ready-to-use pie dough at the old bakery and café but nowhere near as much as they make now in the bigger, production-focused space.

Packages of frozen dough, which make one double-crust pie or two single-crust pies, are available at the bakery and its wholesale partners, including City Market, Onion River Co-op.

The "pucks," as Lane called them, are made in batches of 100 from simple ingredients: wheat flour, butter, salt and cider vinegar. She recommends letting the frozen dough thaw slowly in the fridge overnight.

"Then take it out of the bag and let it sit on the counter so it's not rock-hard," Lane said.

How long to let the dough sit depends on how warm your house is; too long, and the butter will melt. But if it's too hard, the dough will crack as you try to roll it out. "Probably half an hour for most people's houses," Lane said. "Then use it. That's the best thing. I mean, you can take it right out of the fridge and whack it, but that's not ideal."

When making pies, Mirabelles par-bakes all its crusts — "Even pumpkin, a little bit," Lane said — to prevent sogginess and to keep the sides from slumping. To weigh down the crust for par-baking, the bakers line it with coffee filters filled with dried black beans.

Gazing into the bakery's glass case, I considered skipping the whole thing and just buying a pumpkin or maple-bourbon pecan pie. But Mirabelles reached capacity for its Thanksgiving preorders late last week. (The bakery will be stocked with pies, cakes and plenty of dough for same-day pickup in the days leading up to Thanksgiving.)

So I'll follow Lane's advice and be grateful I'm making only a pie or two, not the hundreds per day that Mirabelles cranks out.

Trust me on this: Instant coffee can be good. And, during hectic holiday travel, it can really come in handy.

Several of Vermont's specialty roasters now sell instant versions of their high-quality, carefully sourced coffees. At Burlington's Brio Coffeeworks, the slim boxes say, "This is not your grandmother's instant (no offense grandma!)." After mixing up a few cups — both hot and cold — I agree.

"Obviously, we all know the old-school instant coffee," Brio cofounder and president Magda Van Dusen said. "That has its place, for sure. But we were looking for something different that we could be excited about."

At first, Van Dusen opposed making instant on principle, she said. But she came around to the idea after trying other specialty roasters' instant coffees processed by Swift Cup Coffee in Lancaster, Pa. For the past year or so, Brio has partnered with Swift Cup to produce instant, freeze-dried versions of its Calypso blend and Guatemala La Voz single-origin coffees.

"I was proven wrong," Van Dusen said with a laugh. "Who knew it could be so delicious?"

Each box comes with six sachets of coffee. To make a cup, empty one into 10 ounces of water — hot or cold, though it takes a little more effort to dissolve the coffee in cold water — and stir. It's about as easy as waiting in line at an airport Starbucks or finding the coffee pot in a grimy rest stop — and a coffee snob like me is much more satisfied with the result.

The instant sachets are flexible, too: Reduce water for a more concentrated cup, or add it for a weaker one. Avid iced latte drinkers can swap some of the water for their milk of choice.

Van Dusen usually cautions customers that the instant coffee won't taste exactly like a traditionally brewed cup. But she sees it as another way to enjoy good coffee, like canned cold brew or flash-chilled espresso shots.

"I feel like we don't need to be such purists about really awesome coffee," she said.

A box of instant makes a great (and slightly selfish) gift for hosts who don't share your taste in specialty coffee. And it's a lot easier to get through TSA than an already-brewed cup.

"I haven't been stopped for it yet," Van Dusen said.