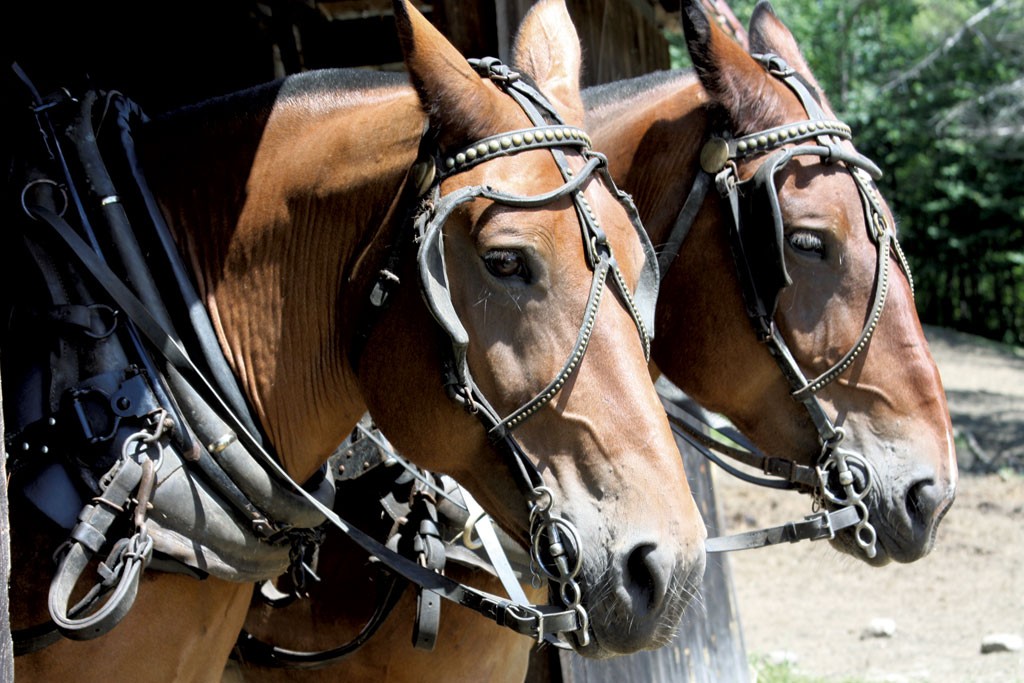 Carl Russell wraps one end of a steel chain around a felled tree, then backs his 3,200-pound "power unit" — aka Ted and Petey, his team of harnessed draft horses — into position in front of the log. With nothing more than subtle nudges on the reins and terse voice commands of "Gee!" (right) or "Haw!" (left), he maneuvers the animals backward inch by inch, as deftly as if he were parking a golf cart.

"The really intriguing part of working with horses is getting to the point where you can communicate with them to this degree of responsiveness," Russell explains, hitching the other end of the chain to the horse cart. "Because, really, what good is a power unit if you can't control it?"

As Russell skids the log across a pasture and up a narrow dirt road, it's readily apparent how horse logging differs from mechanized timber harvesting: no roar of diesel engines, belches of black smoke, deep muddy ruts or compacted vegetation created by skidders and bulldozers. Apart from the occasional whine of a chain saw, the clop of hooves and the jangle of chains, it's as quiet as a walk in the woods.

In a very material sense, horse logging — or any work done with draft animals — is the original solar power. Locally grown hay, grasses and grain fuel Russell's "engines." So perhaps it's no surprise that interest in the use of draft animals for logging and other agricultural activities has burgeoned along with Vermont's explosion of solar-energy projects.

Russell and his wife, Lisa McCrory, own Earthwise Farm & Forest, a 158-acre organic farm on a wooded hillside in Bethel. The farm, including the 18th-century log cabin where they live with their three kids, has been in Russell's family since his grandfather bought it in 1938. There, the family makes a living selling raw milk, eggs, vegetables, meat birds, pork and beef at its roadside farmstand. Three draft horses power nearly all the heavy lifting, tilling and logging on the land.

Russell, a University of Vermont-trained forester, has been horse logging for 29 years, both on his own property and on private woodlots, and then selling logs to local sawmills. He got his start in 1986, when he was just 26 and working as a log buyer for a large regional sawmill.

As Russell prepared to leave that job and go out on his own as a conventional forester, he traveled to Stockbridge to say goodbye to a client. Russell had been buying timber from the man for years and knew he consistently delivered exceptional saw logs, but he had never had occasion to visit his logging operation.

He remembers walking into the woods that day and being mesmerized when he saw how easily the old-timer logged using a single horse. 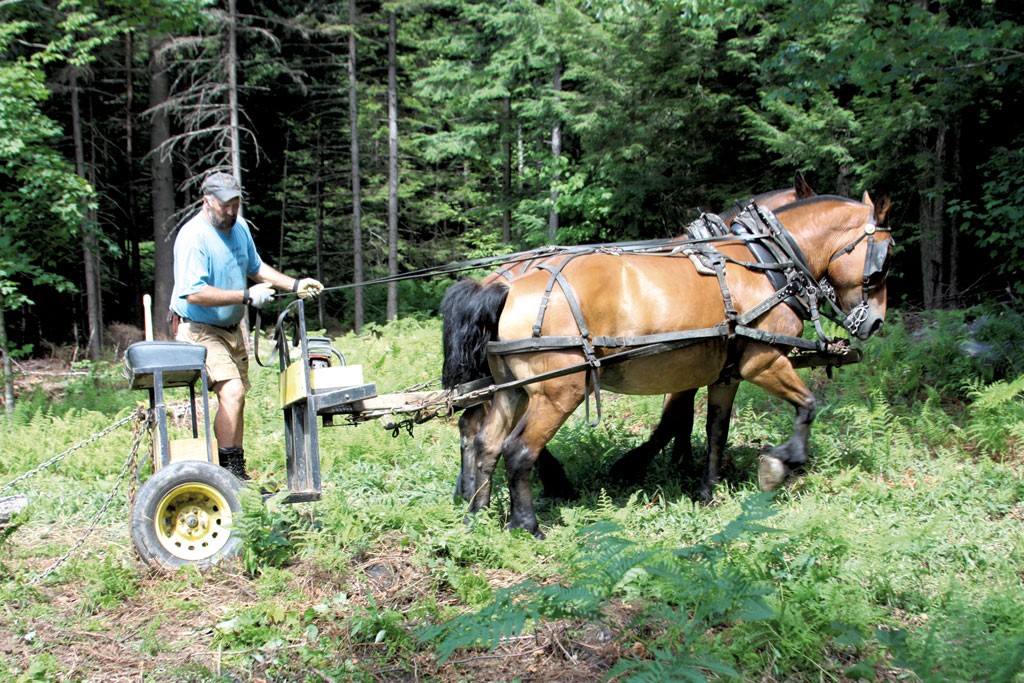 "It was like watching a dance," Russell recalls. "Just fantastic surgical maneuvers, with this enormous horse moving pretty big timber."

Russell knew immediately that, rather than invest in heavy machinery as he'd originally intended, he wanted to buy a draft horse. Six weeks later, the Stockbridge lumberjack sold Russell his first horse.

"He parked his horse trailer at the bottom of the hill, and I unloaded the horse and started walking up the hill," Russell recalls. "I could hear his horse trailer banging down the road and just thought, What the hell am I doing?"

Horse labor has a long history as the bedrock of farming and logging in Vermont, but by the time Russell got into it in the mid-'80s, that history was well in the past. The old farmers in the area eyed him skeptically, he recalls.

"They thought I was an idiot!" Russell admits with a laugh. "In some ways, it was almost insulting to them that I would be so serious and committed to this absurd, archaic way of working."

Russell had to seek out the few elderly lumberjacks who still knew how to move timber by horse; more often, he found himself learning by trial and error. Though his first horse, Rob, had been described to him as "an old dud," Russell soon realized that "he was just an amazing horse. He was my rock."

Russell also discovered he had a knack for communicating with horses. Within a year, he bought his second, Peg, a 6- to 9-year-old mare. Russell worked her for 21 years before she had to be euthanized. Within a year of buying Peg, he stopped using his tractor. He eventually sold it and hasn't used one for logging since.

Though some people have romantic notions about horse logging, Russell emphasizes that it's arduous and dangerous work: "As nice as it is to work with horses when they work well, it's hell when they don't." When the flies are too distracting or the temperature mounts too high, Russell has to move on to other work.

Because horse logging is time- and labor-intensive by nature, it costs landowners more than conventional logging would. Horse loggers typically practice a method called restorative forestry: They don't clear-cut the entire woodlot, and they often leave standing the trees that would command the highest prices at the mill.

This method doesn't reap landowners the highest possible cash return from their woodlots — at least, not initially. But, as Russell explains, once landowners recognize residual damage to the woods as a cost to them, they begin to see non-damaging practices as an investment in the land. Research has shown that, over time, forests logged with horses grow at a more vigorous pace and are more productive than conventionally logged stands. 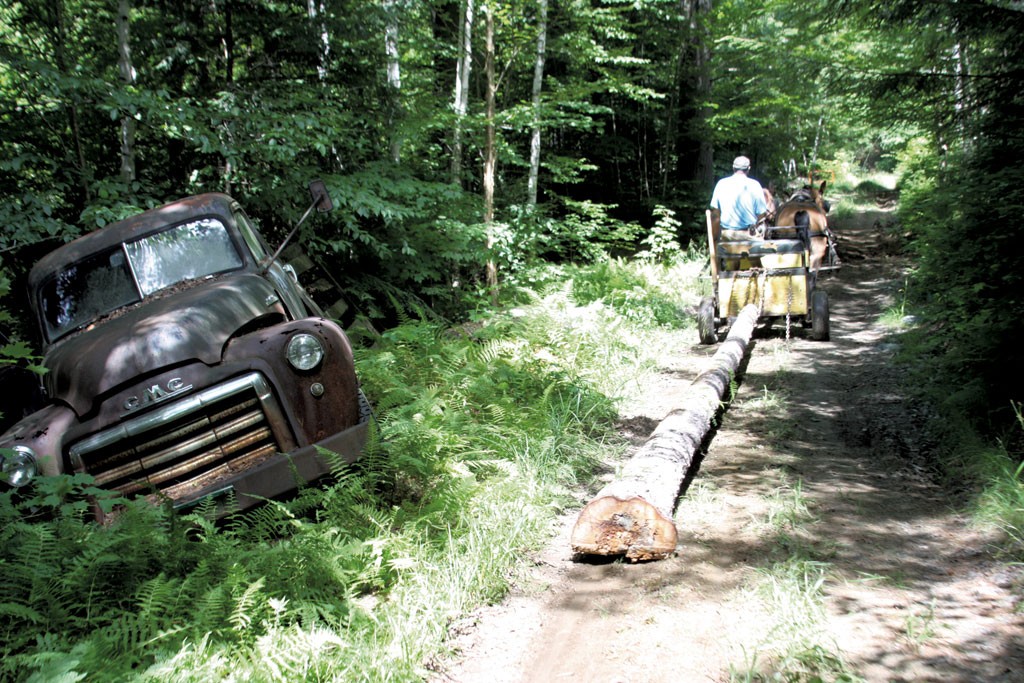 That's because horse logging allows Russell to get into spots where skidders and bulldozers can't go and surgically remove the trees he wants, without compacting the soil or cutting wide swaths for roads and landings.

"If you want to get in here through the puckerbrush without mowing it all over," he says, pointing to a thicket of sumac and buckthorn, "you can put one horse in here."

The human scale of horse logging has another set of economic advantages for the logger. Logging with heavy machinery requires an upfront investment of tens of thousands of dollars, which often sends loggers deep into debt.

Russell emphasizes that he's not bad-mouthing conventional methods, but he says that many loggers get "stuck in that economic grind." Carrying hundreds of thousands of dollars in debt, they can't turn down jobs and must "feed that beast."

For Russell, feeding his beasts costs about $5 per day. "I can work with my horses for weeks without having to generate any income," he adds. And, unlike skidders and loaders, Russell points out, horses actually appreciate in value over time.

"The more you utilize them to the best of their ability, the better they get and the more you can get done," he explains. Asked for an example, Russell points to his animals, who've been standing for 15 minutes without moving more than a few inches in any direction. "That right there," he says, "is a really good attribute."

Russell and McCrory are well known throughout the region by those who work with draft animals. In 2007, they founded the Northeast Animal-Power Field Days, a three-day event held annually at the Tunbridge Fairgrounds that includes workshops, demonstrations and trade exhibitions.

That event, which Russell and McCrory oversaw until 2010, generated so much interest that it soon gave rise to the Draft Animal Power Network, an organization with about 600 members and a worldwide following. The network now holds its field days every other year and rotates them throughout the Northeast; the next one is scheduled for September 24 to 27 in Cummington, Mass.

Russell eventually passed the reins of the field days to other organizers so he could do more of what he enjoys most: be in the woods with his horses. He still reserves the time to teach and mentor younger horse loggers, in part because, when he was in forestry school, "Horses were part of the history lesson," he says. "They weren't part of the conventional lesson."

Now he can instruct others at Sterling College in Craftsbury Common, one of a handful of schools around the country with programs in low-impact forestry and draft-horse management. According to Rick Thomas, the draft-horse educator, farrier and lumberjack who runs the program, interest has grown dramatically in the last decade; nearly all the program's classes are filled and have robust waiting lists.

Jason Rutledge is a horse logger of 40 years who runs the nonprofit group Healing Harvest Forest Foundation in Copper Hill, Va. He says the demand for horse loggers now far exceeds the capacity of practitioners to do the work.

Thirty years ago, Rutledge says, he was relegated to the hardest logging sites with the lowest-quality timber, areas inaccessible to heavy machinery.

"That's completely changed," Rutledge says. "Now I only work on the best sites with the best standing inventory of trees, with the best landowners, who are not doing it because I can give them the most money for it but are doing it for the aesthetic of the forest and the enhancement of the forest."

Like Russell, Rutledge is helping increase the ranks of horse loggers who share his environmental ethos. The Healing Harvest Forest Foundation now offers apprenticeships in horse logging; this year, Rutledge had 250 applicants for just six positions.

For his part, Russell also enjoys working with a different kind of novice. Recently, he adopted a pair of draft horses from Blue Star Equiculture in Palmer, Mass. The organization rescues draft and carriage horses that have been severely neglected or starved. Russell's goal is to turn them into top-notch logging horses. As he puts it, "I'm kind of jazzed by the challenge of a horse that has some problems."

Russell admits that horse logging isn't for everyone, especially those who lack the patience to work with often-unpredictable animals. But for those who have it, he says, the rewards are great. To illustrate, he quotes a Wendell Berry poem that reads in part, "I learned to flesh my will in power great enough to kill me should I let it turn."

"Horses can be an extension of your body, if you can communicate with them," Russell says. "They're just a great big muscle to me."

The original print version of this article was headlined "Rein Checks"