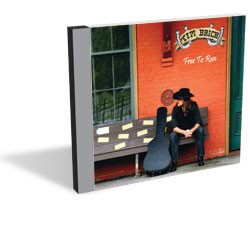 On his 2009 debut, Borderline, central Vermont songwriter Tim Brick introduced himself to local audiences as a genuine blue-collar bard. The record portrayed Brick as a classic country-rock enigma: a roadhouse roughneck with a heart of gold. His recently released sophomore follow-up, Free to Run, furthers that dichotomy with 13 tracks that bristle with bar-band twang yet are tempered by a surprising vulnerability.

The record opens on “Kickin Back,” an efficient little country-rock nugget that ably captures the small pleasures of, well, kicking back after a long day — ideally with a cold beer in hand on the front porch. “Nothin’ to do on this hot afternoon, but to sit down and have me a drink. / I’ve been workin’ real hard and feelin’ tired, I need a little space to think.” Those looking for lyrical profundity would do well to look elsewhere. But the simple honesty in Brick’s drawling delivery is appealing and relatable.

Throughout the record, Brick straddles, and often blurs, the line between country sentimentality and badass rock swagger. As in his debut album, however, he is at his best in his twangier moments. “Hard Times On Easy Street,” for example, lopes along with a breezy back-road lilt, highlighted by Jim Pitman’s subtle pedal-steel lines. The following cut, “Spinning My Wheels,” cruises with mid-tempo alt-country sweetness and is notable for some truly impressive Flying Burrito Brothers-esque harmonies. “300 Miles” is an album highlight, a classic wandering-lonesome-cowboy tune with still more excellent pedal work — this time courtesy of Rich Lester.

A few of Brick’s rock-styled cuts are clear album lows, including “Cold Hard Truth,” in which his direct wordplay devolves into middling cliché. But Brick doesn’t always struggle when he switches gears into more straightforward rock. Several tunes, including the title track, the snarling fist-pumper “It’s A Good Thing” and the steamy blues-rocker “Two Hands On the Wheel,” suggest Brick is just as comfortable in his black T-shirt as he is his cowboy boots.

Tim Brick won’t bowl you over with poetic or artful lyrics. And he’s not breaking any molds, musically. But he doesn’t have to. What he does, he does exceedingly well, and Free to Run is as solid a take on blue-collar rock and country as you’ll find in Vermont.