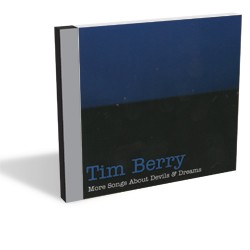 In a recent letter to Seven Days, local songwriter Tim Berry introduces his latest album, More Songs About Devils & Dreams, by describing it as something of an ode to the various places he’s called home over the years. These are largely rural locales, such as Kentucky, South Dakota and, of course, Vermont. Berry’s sophomore effort — he released his debut, Lay It Out Straight, in 2001 — reflects those rugged backwoods roots, as well as an ethereal bent he refers to as his “little rambling, sometimes distant midnight train of thought.”

The album was recorded (mostly) live in a makeshift studio set up in a central Vermont barn. And many of the songs here exude a laid-back appeal befitting those rustic surroundings. Devils & Dreams doesn’t offer virtuosic Americana fare — though the performances here are, by and large, very good. Instead, we find lovingly crafted, homespun roots music that embraces its flaws and imperfections as part of the larger panorama. From occasional clams and slightly sliding pitch to the unexpected contributions of a barking dog, Berry’s record is loaded with congenial character and easy charm.

“Looking for the Devil in It All” cranks up the intensity with a sizzling violin and mando duet. Berry proves to be as sturdy a fiddler as a vocalist: The song boasts a delightfully sinister appeal, as if the Devil had forgone Georgia and settled on a crossroads in Vermont instead.

“Grace” is a sweetly churning, mid-tempo ballad that lithely curls around dovetailing guitar and mandolin lines. “Kitchen Light Lament (Colorado)” follows and bristles with a sort of resigned down-home allure.

“Slow Night” imparts a sinewy, late-night blues feel that wouldn’t seem out of place on a record of Tom Waits outtakes from the mid-1970s. “The Places That You’ve Never Been” teases a bossa nova groove but retains an unworldly roots appeal.

The album ends on a bright note with the jaunty, hot-house-tinged “Waking Up to Dreaming Again.” Berry and his cohorts gleefully trade solos until the song, and the record, come to a punchy, celebratory close.

Tim Berry sits in as part of the ongoing Songwriters in the Round series this Thursday, March 1, at On the Rise Bakery in Richmond.