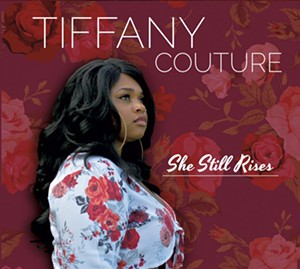 Couture balances twang and R&B influences well on her first outing. It's kind of her defining characteristic. The singer's YouTube channel is replete with live performances of cover versions that fit her particular brew. To wit: She's just as partial to Carrie Underwood and Kelly Clarkson as she is to Beyoncé and Jennifer Hudson. Those names should also give you an idea of Couture's particular flavor of songwriting. If not, let me spell it out for you: P-O-P — specifically the kind heard on "The Voice" or "American Idol."

Layered harmonies flourish throughout She Still Rises, which help vocal arrangements on tracks such as "Hold Your Head Up High" and "Broken Promises" stand out against somewhat bland songwriting. Couture has a knack for counterpoint, and her vocals are immaculate — though adding a bit of jagged edge would likely spice things up.

Track two, "Texas Tornado," is an up-tempo, down-home ballad that tells the story of how her adoptive parents brought her to Vermont from the Lone Star State. That's right. The meteorological maelstrom to which the title refers is the singer herself. And that's a little odd.

The song undoubtedly comes from a place of boundless love, but it doesn't quite land. The singer ruminates on how she feels she changed her parents' lives. She sings, in the third person, "When she got off the plane / In her little pink dress / All their big dreams came / Nothing more, nothing less." It's a peculiar perspective to take. Wouldn't it be more authentic to pen a song about how someone or something changed her life, not the other way around?

"Broken Promises," a breakup song, stands out as the EP's most engaging cut. Nylon-stringed guitars pop on the offbeat as a tambourine punctuates each measure. Couture neither wallows nor lashes out at her betrayer. The singer honestly assesses her own feelings and self-worth while also adding a bit of sass as she reminds a heart-breaking jerk, "What goes around comes around."

Given that She Still Rises is Couture's first recording, it's natural that she's still finding her footing. On future endeavors, it would be great to hear the singer push beyond clichéd tendencies — without sacrificing her positive spirit, of course.

She Still Rises is available on iTunes.