Ticking Off All 251 Towns in Vermont, One Photo at a Time | Summer Guide | Seven Days | Vermont's Independent Voice

Ticking Off All 251 Towns in Vermont, One Photo at a Time

Years ago, after quitting her job as an investment banker, Melanie Considine turned to her true passion: photography. “I was always one of those people with a camera in hand,” she said, and so in her late thirties she left behind the high-stress, high-powered world of finance for art school and the business of art and freelance photography.

But in the years since, work and life intervened. Considine, now 52, started her own web-design business and suddenly found herself spending more time staring at computer screens than through the lens of a camera. Her old passion was nagging at her late last September, when she decided she needed a challenge — an assignment. Something to get her out of the house, away from the computer and snapping photos again.

That’s how Vermont 251 in 365 was born. After some quick calculations, a search for domain names and a spontaneous decision, Considine pledged to visit and photograph all 251 towns in Vermont in the space of one year. The very next day — September 29 — she set out from her home in Randolph for the Northeast Kingdom, where she spent 10 hours photographing five towns.

As it turns out, Considine is one of thousands of Vermonters, and fans of Vermont, chipping away at the goal of visiting every town in the state. That challenge unites members of the 251 Club of Vermont, which Dr. Arthur Peach proposed in 1954 in the pages of Vermont Life.

“A swift turn from one of our main roads, and you are on your way to the rewarding experience of a lifetime and memories good until the years are frosty,” promised Peach, a retired English professor and the former director of the Vermont Historical Society. On country roads, he wrote, drivers would find peace and fresh air, beautiful vistas and kindly people.

“Vermont from the beginning has been a state of towns, historically and otherwise,” Peach wrote, “and in them and in them only can the real Vermont be found and seen.”

His proposal evidently struck a chord; current 251 Club executive director Sandy Levesque said that the state had to print a new batch of Vermont maps to meet the demand from readers eager to join the fledgling club. In recent years, an average of 200 new members have joined each year, and today the group counts more than 4000 people in its ranks, roughly 200 of whom have completed the 251 challenge. Membership costs include a one-time enrollment fee of $5 and annual dues of $8, and members gather annually in Montpelier to swap stories.

Does the concept still work today, nearly six decades later? Absolutely, said Levesque. “This is still a very compelling and creative way to get off the main roads and explore all of the towns and cities,” she said. And it’s not just drivers making the trek: 251 Club members have canoed, biked, motorcycled and walked their way along Vermont’s back byways. 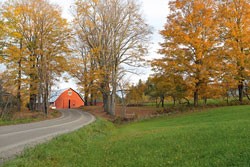 Ultimately, the club is more about good fun and a spirit of exploration than it is about hard-and-fast rules. There’s no official checklist, and no requirements for members to prove they’ve visited any particular hamlet. “The idea, the hope, is that you will slow down, get out of your car, take a look around — to have an experience, not just to drive through,” Levesque said.

That’s exactly what Considine is doing. On a recent morning, she made the trip from her home in Randolph over Middlebury Gap to cross off two more towns in Addison County: Leicester and Salisbury. She’d already photographed 153 towns, but she admitted she was getting a little nervous.

“I’m actually a little behind right now,” she confessed from the driver’s seat of her gray Volkswagen Tiguan. By March, the official halfway point for her quest, she’d ticked off some 130 towns and was in good shape to meet her goal. But then April rolled in cloudy and gloomy, and Considine lost some of her steam.

She’ll have to regain it in the coming months if she wants to photograph the final 98 towns on her list before September 28. Most of them are nestled in far-flung corners of the state, which means long drives and overnight trips.

Not that Considine hasn’t already logged long hours — something her flexible web-designer job makes possible. She has put 21,000 miles on her car since purchasing the vehicle last April, and she estimated that a solid 10,000 of those miles were eaten up by the 251 project. She’s logged countless hours balancing her tripod along the sides of Vermont roads, snapping away at old barns and scenic vistas.

Considine isn’t merely interested in collecting picture-perfect images of the state — the sort of glossy, pretty scenes that might appear on the pages of a calendar. “My goal for the project was to build a body of work that means something, that really represents Vermont,” she said. As a longtime visitor to the state before relocating here from Pennsylvania five years ago, she knew firsthand how easy it was to take in the beautiful sights without delving deeper.

“Everybody comes up, and they see all the tourist places,” Considine said. “There’s so much more here.”

Puttering through West Salisbury, she paused periodically at intersections to find her place on a photocopied map of the town. She’d tucked the Delorme Vermont Atlas & Gazetteer into a crevice beside the passenger seat. With that, her photocopied maps and her on-board navigation system — nicknamed “Lucy” — Considine never considers herself lost.

But her mission does require a sense of adventure and a bit of aimless wandering. She tries to hit some of the major landmarks in the towns she visits, but just as often, she said, Considine ends up tooling down back roads, eyes peeled for inspiration.

On our trip she slowed the car a few times to peer at an old cemetery but ultimately pressed on. Her first stop of the morning came near an old, weathered barn. Piles of hay peeked from the hayloft, and barn swallows darted in and out. Considine quickly set up her tripod and digital Nikon; for the rest of the morning, she’d keep the camera and tripod at the ready in the backseat of the car.

“This is the kind of place I could spend hours shooting,” she said, adjusting her lens.

Some days on the road are magical, Considine observed. But others — this one, for instance — can be a struggle. The light wasn’t quite right, and the shadows weren’t cooperating. Undoubtedly, the distracting presence of an inquisitive passenger wasn’t helping; Considine almost always makes these journeys alone.

As the morning wore on, she braved some prickly roadside weeds and bushes for a few shots of a small, rocky farm. She captured Leicester’s meetinghouse, built in 1826, a petite white Catholic church and the Salisbury town offices.

It wasn’t the best day for shooting, Considine conceded, but she’s learned to live with such setbacks.

“I found myself a lot in the beginning saying, ‘It’s not perfect today. I’ll come back,’” she said. But with 251 towns and a strict timetable, “you can’t do that.”

There haven’t been any major mishaps on the quest so far. Considine sounded like a commercial for Volkswagen as she sang her Tiguan’s praises on muddy or snowy roads. She did run into navigational trouble trying to reach Lewis — population 0, and one of Vermont’s five unorganized towns. In the end, she couldn’t find a road into the remote town and will have to double back in her travels.

Hard-to-reach Lewis is legendary among the 251ers, according to Drew Nelson, the president of the 251 Club board of directors. He and his wife, Claire, completed the 251 challenge over seven years in the 2000s. Nelson had been a club member since the late 1970s but couldn’t seriously tackle the venture until the couple sold their general store in southern Vermont.

“We had a Jeep; we had a dog; we’d pack a picnic lunch and take off for the day,” Nelson said. As for the mysterious Lewis — they’d heard rumors about closed roads or having to walk in. But a stop at the Silvio O. Conte National Fish and Wildlife Refuge armed the Nelsons with the directions they needed. Twenty-two miles and 45 minutes later, they had one of the 251 Club’s more notorious towns crossed off their list.

About three hours after setting out, Considine was ready to head back to Randolph. Next up, in a few days’ time, was Woodstock; her plan was to rise early and hit the town before its residents were out and about.

“It’s a personal challenge,” she said, packing up her gear. Inevitably, Considine said, some experiences won’t translate perfectly into a photograph. But that’s part of the beauty of her quest.

“It’s made me love Vermont,” she said, even more than she did before. “I have much more of a connection with it.” And she’s been delighted by how many surprises have met her along the way to meeting the 251 challenge. “Who knows that this stuff is out there?” Considine marveled.

The original print version of this article was headlined "Hit the Road."