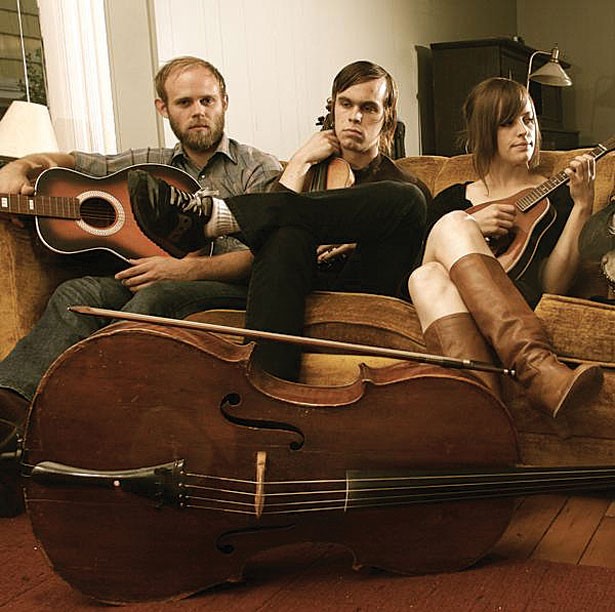 Who doesn't love a good summer vacation? Having been out of school for a good 10 years now, I can only look back fondly on hazy days spent swimming, grilling and lazily reading Stephen King novels in a hammock between bouts of sipping sun tea and napping. Sweet, sweet napping. Actually, I'm pretty sure summer vacations are the only reason anyone becomes a teacher these days. I suppose there's the whole "shaping minds" thing, but let's be honest: It's the vacay.

On that note, I'm pleased to announce that the ever-industrious folks at Tick Tick have emerged from their summer-long hiatus with a pair of shows guaranteed to tickle the unfunny bones of indie music fans statewide.

A few months back I wrote - more than a few times - quite glowingly about Portland, OR-based chamber-folk duo Horse Feathers, and practically begged you to check out their show at The Skinny Pancake - the venue's debut show, no less. Much to my delight, a few of you actually showed up. Score one for me! Those who attended were treated to one of the most intimately stirring evenings of music to take place in Burlington for quite some time.

A high school chorus teacher once offered me these sage words of advice: The best way to engage an audience and trick them into paying attention is to lower your voice. The theory being that people are more apt to perk up and listen when you make them work to do so. I don't recall seeing Horse Feathers in any of my chorus classes as a teenager, but it's a lesson they seem to have mastered. Maybe there's more to teaching than lengthy vacations after all.

Blending darkly poetic lyrics with dense orchestral arrangements featuring nimbly plucked banjo, weeping violin and eerily bowed saw, the band achieved something that night which is all too infrequent in live music, local or otherwise: awed and respectful silence among the audience.

This Friday, Horse Feathers bring their affecting brand of cinematic melancholia to The Monkey House in Winooski, with Seattle's grievously angelic indie-pop chanteuse Johanna Kunin and our own noir-ish Americana trio, Farm.

In the previous bite, I mentioned there were two upcoming Tick Tick shows. Typically, I'd kill two birds with one column piece and give you the run-down for both shows in the same feature. But this is not your typical show, and I'm not your typical columnist. Or so I'd like to think. Anyhoo . . .

Have you ever heard of The Capstan Shafts? Unless you've already read the CD reviews in this issue, I'm going to go out on a limb and say that all but the indie-geekiest of you have not. It's OK: Until two weeks ago, neither had I.

The Capstan Shafts is the stage name of über-prolific Lyndonville songwriter Dean Wells, who has released 17 albums . . . in the last five years! Eat your heart out, Ryan Adams.

Taking full advantage of the ever-expanding online resources available to independent musicians, Wells has built a rabid cult following on the Internet, even catching the ears of pseudo-indie cyber monoliths such as Pitchfork Media and the All Music Guide.

My disdain for Pitchfork has been well documented in these pages. But for once, I have to give credit where it's due. Pitchfork Senior Contributor Matt Lemay succinctly - and snarklessly - hit the nail on the head when he referred to the tunes on the Shafts' new disc Environ Maiden as "Smart, sharp and emotionally resonant indie-pop songs." I couldn't have said it better myself.

Word on the street is that Lemay might actually make the journey from Chicago to Vermont for this Saturday's performance at The Stannard Church. I know what you're thinking: Why would a writer for one of the most prominent music websites in the world travel to a small town in northern Vermont for a show in an old church?

For starters, The Capstan Shafts have never played a live show. Ever.

That's right. Despite the voluminous quantity of Wells' work, he's never performed in front of anyone. I'm guessing he needs the tune-up before heading to NYC to play a showcase gig at the upcoming CMJ showcase.

For more info on The Capstan Shafts and directions to Stannard, check out http://www.ticktick.org.

In non-Tick Tick news, Vermont's answer to Sonny & Cher, local trad-folk duo Avi & Celia, have a number of upcoming dates around the state that merit mention.

Having spent the last few months touring the East Coast and California, the pair enthusiastically return to Vermont armed with a slew of new tunes and stories from the road. Burlington's version of Ian & Sylvia kicks off a week's worth of gigs this Wednesday, October 3, with sultry all-girl alt-country trio The Wailin' Jennys at the Higher Ground Ballroom. Then, the Queen City's Mitch & Mickey head to central Vermont on Thursday for a headlining date at Bradford's Middle Earth Music Hall, before rounding out their travels with a stop at Montpelier's Langdon Street Café on Friday.

I have a confession to make: I hate Crocs. By no means am I a fashionista, but those fugly little plastic shoes bug me as much as, if not more than, any number of my other personal fashion biases, including visors, oversized sunglasses and fanny packs. Especially fanny packs.

Admittedly, I'm not a huge fan of the Boston-based acoustic jam-popsters. Oh, sure, I used to listen to Guster during my brief stint at UVM as a Teva-wearing English major. But somewhere between freshman year and dropping out three semesters later, I came to the crushing realization that Guster is, in fact, not for lovers - as the bumper stickers erroneously claim - and I just lost interest. It happens.

However, Croc-clad college-rock fans - and non-jaded lovers, I suppose - will be delighted to know that the band is headlining the Crocs Next Step Campus Tour with support from folk-rock singer-songwriter Brett Dennen. So throw on some brightly colored plastic sandals and head over to UVM's Patrick Gymnasium this Saturday for an evening of sensitive dudes in comfortable shoes. Croc and roll.