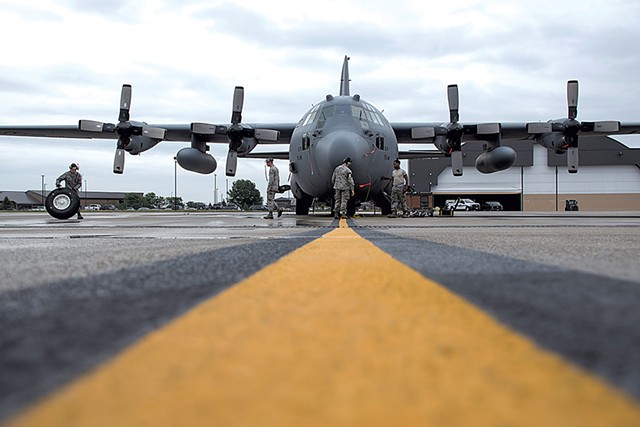 A deafening roar lured Tammy Pitmon out of her Underhill home on August 27. Looking skyward from her deck on the side of Mount Mansfield, she was shocked to see a large aircraft so low "I was sure the plane was flying into the mountain," she told Seven Days. "That's how dramatic it was."

Pitmon is accustomed to the Vermont Air National Guard's thunderous F-16 fighter jets flying overhead. But this plane was different: It had a fat fuselage, an enormous wingspan and two bulbous propeller engines hanging from each wing. It was massive, gray and lacked any discernable markings.

When the plane disappeared from sight, Pitmon listened for the sound of an impact. Instead a second plane flew over her, just as low, that was identical to the first. She said she could hardly believe her eyes.

The planes were "just hauling ass, right on top of us," she said. "Almost like you would see in a movie like Mission Impossible. Almost like they were chasing each other."

She called the Vermont Air National Guard. "The person that I talked to said, 'Nope, wasn't us. Nobody flying today,'" Pitmon said.

"Air traffic control at BTV was not talking with any aircraft in that area around that time," Colling wrote in an email. "They can't make a guess at what it was because radar will not pick up aircraft at low altitudes" — that is, anything flying under 1,000 feet.

"The Vermont Air National Guard was not flying on Sunday or Monday," VTANG public affairs officer Lt. Chelsea Clark wrote in an email. She said she reached out to the Air National Guard in New York and Connecticut, and "neither were performing training in the area."

The Federal Aviation Administration restricts most pilots from flying at very low altitudes. "An aircraft can legally fly 500 feet above unpopulated areas and 1,000 feet above populated areas," BTV's Colling wrote in an email. Underhill residents described the planes as being lower in a local Facebook group.

"I didn't see them, but I heard them and felt it," Stephanie Brogle wrote in response to Pitmon's post. "Thought they were gonna land on the house!"

Andy Chamberlin also saw the planes and managed to snap a photo of the second one. Drawing from the social media reports, he believes they flew through Mount Mansfield's Nebraska Notch, then banked and followed Route 15 north. 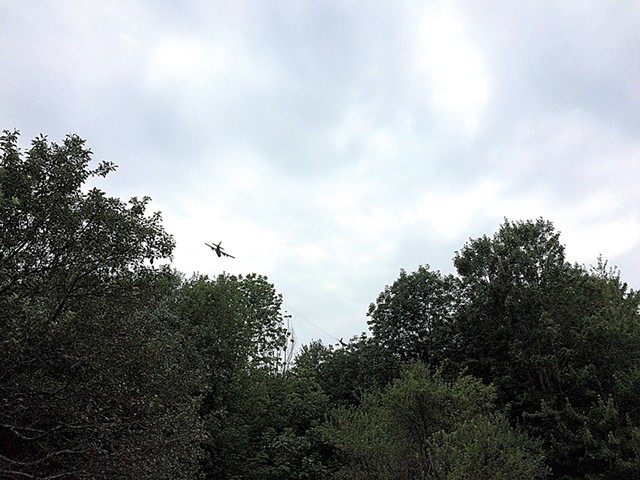 After Seven Days provided Clark with Chamberlin's image and additional details about the time of the flight, she provided an explanation last Wednesday, two days after the incident. She said Connecticut's Air National Guard told her in a follow-up call that two of the unit's C-130 Hercules cargo planes took off from Bradley Air National Guard Base north of Hartford that day and flew a low path over Mount Mansfield.

No one in Vermont — at the Guard or the airport — had prior knowledge of the training mission.

"I don't know how much I can say," Pearce said. "I guess I can say we do low-level flying to avoid detection, so that's what we train for."

Military pilots are allowed to fly lower than their civilian counterparts, Pearce explained; the guard's training missions can be as low as 300 feet. Witnesses who posted to the Underhill Facebook page said the planes swooped down to 60 feet above the trees — so low, the residents said, that they instinctively ducked.

Pearce said the planes might have appeared lower than they were, especially viewed from Underhill, on the western slope of Mount Mansfield.

Plus, they're huge. With a design dating to the 1950s, C-130s are the big-bellied workhorses of U.S. military aircraft. According to the U.S. Air Force, they can carry up to 42,000 pounds and are approved to carry up to 90 soldiers — or 64 if they're parachuting from the plane's rear ramp. The cargo airships can be outfitted as airborne emergency rooms for shuttling injured soldiers from the front lines.

Pearce said that Connecticut's air guard flies eight C-130s in airlift operations. They practice "tactical flying," she said: low-altitude resupply missions intended for parts of the world where planes that appear on radar are targets.

A 30-member team from the unit deployed to southwest Asia in 2017. The cargo planes also supported recovery operations in Haiti after the devastating 2010 earthquake, according to the air wing's website.

Pearce said the unit commonly trains over Vermont, but frequently changes up the flight paths depending on weather and which skills pilots are working on.

Pitmon has come to a different conclusion.

"I think it was kind of, 'We're up in Vermont and we're kind of cowboying around,'" she said. "I think they were having some fun and they were flying really low and buzzing around, and it panicked a lot of people out here."