Everyone gravitates to the kitchen. And why wouldn't they? That's where the food is and where the party is. But it's also where clutter builds up. And where home cooks and hosts need things to actually function.

When things don't, it may be time for a radical kitchen renovation.

Erica Ell, co-owner of Richmond’s HAVEN Design + Building, has remodeled a lot of kitchens. She says the key to a good renovation is “bringing in good lighting and daylight and opening up the kitchen into other living spaces.”

People are often looking to increase functionality with better layout and cabinetry, she says. And the right combination of task lighting and ambient lighting can make all the difference when it comes to smooth transitions between cooking and entertaining.

Then there’s all that clutter. Ell says one of the big changes she makes is “incorporating space for all the things that just don’t have a dedicated space: computers, phones, mail, all that kind of stuff.”

Brian Smith, a kitchen and bathroom designer at Curtis Lumber in Burlington, says the average kitchen is renovated every 20 to 25 years. He’s seen people do it spending as little on materials as $2000 or as much as $35,000.

“It really can be overwhelming,” Smith says. “I’ve had customers come in here, and they say, ‘This is just sensory overload. I need to get out of here.’” But a good designer, he says, can help them figure out what they want.

“To me, a kitchen is pretty simple,” says Smith. “It’s a puzzle, and you’ve got a bunch of components that have to fit into that puzzle and be both aesthetically pleasing and functional.”

Seven Days talked to the owners and designers responsible for three recent, drastic Vermont kitchen renovations to find out how they solved their dilemmas. 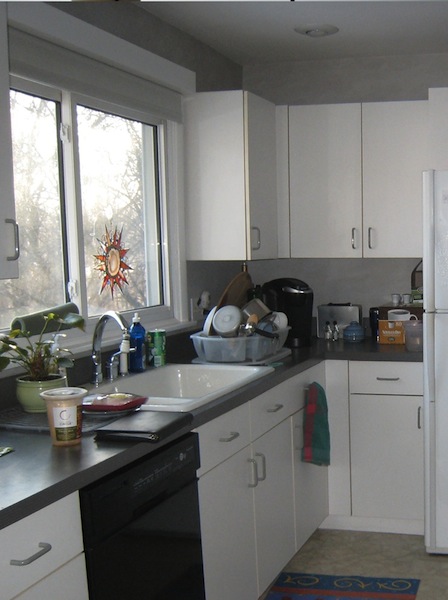 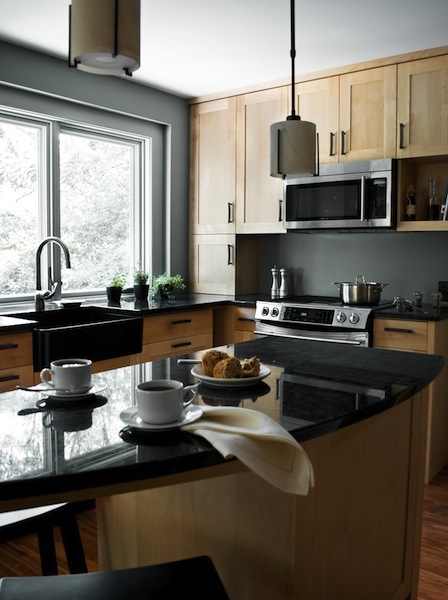 “Everything about the old kitchen bothered me,” says Marlene Price, who lives with her husband in a 170-year-old Williston farmhouse. The kitchen, updated in the 1950s and again when the Prices bought the house in 1979, was “just kind of pieced together,” she says.

At about 15 by 12 feet, there was no space for sitting down to a meal. “We had to eat in the formal dining room, or we would take little tables in front of the TV in the den or something,” Price says. “Now, we have a little corner of the kitchen where we have a small table, so we can eat there like civilized people.”

The Prices had a clear vision of the new kitchen they wanted. When they met with Chris Van Genechten of Bouchard-Pierce in Essex Junction, they brought a picture clipped from a magazine. They wanted to “make the kitchen more functional and up to date, but still maintain that character of the old house, keep that country look,” recalls Van Genechten.

Gary Crowley of Crowley Construction installed cherry cabinets and quartz countertops, brought the sink closer to the window and tucked the microwave into the cabinets to save space.

“I love my kitchen,” says Price. “After living with the old, patched-together thing for so many years, every time I go in I get great pleasure out of it.” 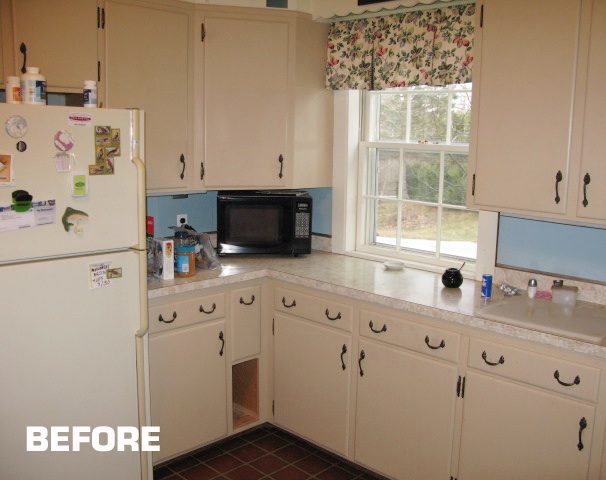 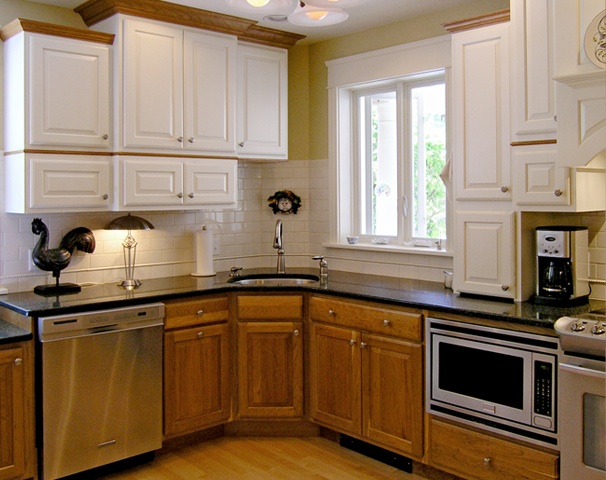 There wasn’t anywhere to eat in this 1980s update of a ’50s ranch kitchen in Richmond. It was a small space — about 14 by 15 feet — and, because it also housed the washing machine and dryer, it was often cluttered.

Owners Donna and Mark Saks wanted to modernize, says Ell, who designed the new kitchen. “The challenge was to have a multifunctioning space but also to make it attractive and a place they could entertain.”

HAVEN transformed an existing porch into a small, pop-out dining area lined with tall windows. Ell also increased the size of the window over the sink to let in more light and capitalize on mountain views. Custom cabinetmaker Mark Simon used locally harvested birch. The floors were made from a reddish-brown South American wood called curupay, sourced by Planet Hardwood.

Clever use of space solved the kitchen’s clutter problems. A stacking washer and dryer are now hidden behind cabinet doors, with extra space for folding and supplies. And a cabinet designated for computers, phones, mail and the like keeps the granite counters clean. 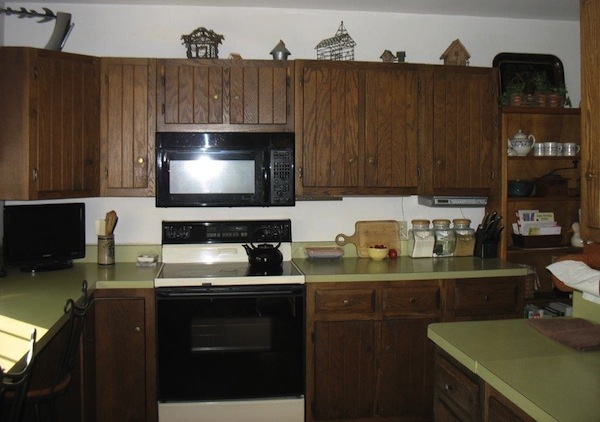 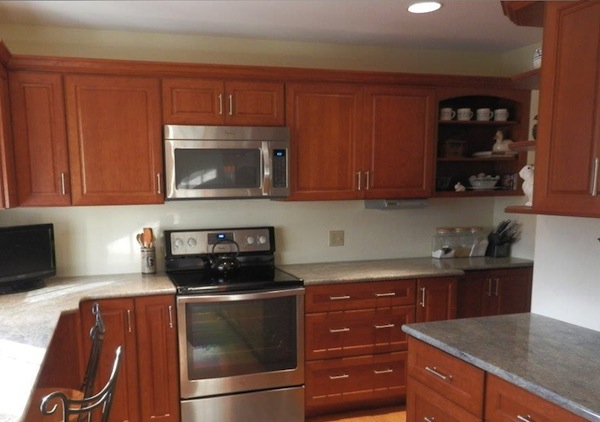 Richard and Anne Hawley’s L-shaped Underhill kitchen was dingy and impractical. “We thought we were going to paint our existing cabinets,” Richard Hawley says. “It soon turned out that what we wanted to do was rearrange the kitchen.”

The Hawleys moved into the 1970s house in ’95. The biggest problem with the kitchen, they agree, was functionality. “When you opened the fridge and you opened the dishwasher, they hit each other,” Anne Hawley says. And when guests were gathered around the counter and she needed to open the oven door, “You had to ask them to move.”

The Hawleys worked with Brian Smith at Curtis Lumber to design a whole new space. Richard Hawley did some of the work himself, tearing out the old cabinets, moving a couple of walls and transforming the existing pantry into a closet for the new refrigerator. Ezra Spring of Spring Builders installed granite countertops and cherry cabinets.

Below the window overlooking Mt. Mansfield, the Hawleys had an indent cut into the countertop so guests could linger there without getting hit with the oven door. To decrease clutter, a custom appliance cabinet with a vertically sliding door hides the mixer, food processor and Keurig machine.

“When you walked in before, the first thing you saw was the fridge,” recalls Anne Hawley. “Now, when you walk in there are glass doors and a built-in hutch, so there’s something attractive to look at.”

The original print version of this article was headlined "Recipes for Renewal."