Hank3 talks about punk, country and a one-night stand 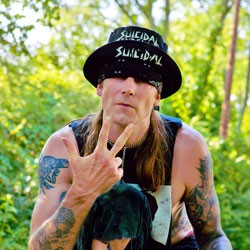 Hank Williams III is rarely at a loss for words. Now going by the streamlined stage name Hank3, the grandson of country legend Hank Williams and son of the country star Hank Jr. is as outspoken as they come. He says, and does, exactly what he feels and makes no apologies. As his surname suggests, he’s a little bit country. But, as his fans have long known, he’s also a whole lotta rock and roll.

The latest evidence is a trio of new records, released simultaneously this fall: a country double album, Ghost to a Ghost/Guttertown, a doom-metal album, Hank3’s Attention Deficit Domination, and a speed-metal record, Cattle Callin’ (released as Hank3’s / 3 Bar Ranch). All three were released on his new label, Hank 3 Records. They are his first releases following an oft-contentious and ill-matched relationship with his longtime label Curb Records.

Seven Days recently spoke with Hank3 by phone, in advance of his show at the Higher Ground Showcase Lounge this Monday, November 21.

SEVEN DAYS: What prompted the name change to Hank3?

HANK3: It was always supposed to be that, from the beginning. But Curb Records wanted to shelve me as Hank Williams the third. So it’s trying to focus on a new beginning as opposed to the history with Curb. And Hank3 rolls off the tongue a little better.

SD: So Curb was basically trying to market your last name?

H3: Correct. I’ve always known my vision. But if you’re on a major label, they’ll try to tell you how to act or what to play. I’ve always known what I wanted to do, and they don’t really like that. I don’t need a producer to tell me what sounds good or bad, or how to write a song. I write songs for myself. I don’t need someone saying, “If you write a catchy song and make a hit, we’ll pay this radio station all this money to make all this money.” I’m not about that. I’m about rock and roll and longevity.

SD: You clashed with Curb virtually the entire time you were with them. I gather they just didn’t know what to do with you. Was it liberating to break away?

H3: Yeah. But here’s the thing. It doesn’t matter if it’s someone like me who didn’t make them much money, or someone like Tim McGraw, who has made them millions of dollars. He’s in the exact same situation I was in. Curb always said they didn’t know how to market me and didn’t believe in me as an artist. That’s just not good business. It’s nice to work with people that respect what you do, whether it’s on a small scale or a big scale.

SD: It seems to me that you’d be uniquely positioned to reach a wider audience because there are three different demographics who would be interested in what you do.

H3: That’s the way I look at it. But now they’ll be back to having their same old roster of pop country and Christian bands.

SD: Your country background is obvious. At what point did you realize you could incorporate punk and metal into the same show and it would work for audiences?

H3: I got my first Kiss records, Black Sabbath, when I was 7 years old. And I got a drum kit. That set me on my way to energetic music. Then I started listening to punk shows on college radio and would tape them right off the radio. That’s when I got into the Dead Kennedys, the Sex Pistols and the Misfits. Then the music got faster with S.O.D. and Slayer. Being a drummer, that stuff mesmerized me.

SD: So the heavy stuff hit you first, before country?

H3: I had a one-night stand who waited three years to tell me that I had a child. They served me papers when I was onstage. They took me to court and I had a judge tell me playing music was no real job. So I went out and showed him, well, yeah, it is a real job. I had to get into country to not be a deadbeat dad.

SD: Um … well, that’s not the kind of thing you’d read about in a press release.

SD: You play a pretty ragged version of country music, especially compared to a lot of the commercial country that’s out now. Is that a conscious choice?

H3: I just do what I do. Some people feel a catch to it and some people don’t. A lot of my songs I’ve lived out, and sometimes it’s a little bit of fantasyland. Being from the South, the swamp stuff, it’s in my blood.

SD: You certainly come by it honestly.

H3: I was at Sirius Radio a while back, and this old-schooler named Alamo Jones told me, “Oh, you sound country when you talk. That’s refreshing.”

SD: Ha. I guess there are a lot of country singers with affected accents.

H3: There are. And then when you hear them really talk in their normal voice, you know they’re puttin’ on a show.

SD: The new records have more than 70 tracks, all totaled. Is that all new material, or had you been sitting on some of it while you were with Curb?

H3: It’s all brand new. In January I started sketching out all the songs, and started recording in February. And from February until June, from the moment I woke up to the moment I couldn’t work any longer, I was dedicated to the music. I normally weigh 160, and I got down to 135. It was an intense process.

H3: In the daytime I was more serious, working on the country stuff and worrying about pitch and time and tone. But at night I would open it up and have more fun with some of the heavy guitar or crazy drum tracks. Not being as uptight.

SD: When you’re writing, at what point do you know when a song will be a metal song versus a country tune?

H3: Because of my learning disability, it’s hard for me to write and read. It always has been. So when I’m working on country, I hit record and basically start channeling what’s coming off the top of my head. Then I go back and write down what’s important with a pen. Doing the doom-metal stuff, it’s just about the guitar and the riff, then drums, vocals are the last thing. It’s two different writing styles. A night-and-day difference.

SD: Do you find thematic similarities between punk and country?

H3: There are underlying themes between both: the outsider theme, depression, independence, loss. Those things are similar. I mean, Hank Williams was singing rock and roll before they knew what rock and roll was. He had “Move It on Over,” then five years later Bill Haley has “Rock Around the Clock,” and that’s supposedly the first rock-and-roll song. Well, Hank Williams was already doing that. Then you have Lynyrd Skynyrd, Hank Jr. Then kids are listening to David Allen Coe and Pantera. There’s always been an underlying theme there, and the walls have been broken down over the years.