Three Small Pleasures to Pack in Your Picnic Basket

Picnics are my favorite pastime on a summer day. Whether sprawling in the dappled shade of a backyard tree, tossing a blanket in an open field or lingering lakeside, there's something really satisfying about slowly snacking through a random assortment of food and drink over a leisurely afternoon.

Eating outside comes with its own challenges, of course: swatting bugs away from the strawberries, constantly patrolling for ticks, keeping sand out of the dip. But when all of the other elements of a picnic are right — equal amounts of crunchy, dippy, salty, refreshing and sweet — I can forgive nature for doing its thing.

My picnic basket is usually full of what the Seven Days food team calls "Small Pleasures" — delicious and distinctive Vermont-made snacks and drinks that pack a punch. Here are three I'm stocking up on this summer.

It's not a picnic without a really great dip. And after trying Reap & Sow Farm's take on Green Goddess dressing, I've decided to ditch grocery store hummus in favor of whatever dippable concoction the Monkton farm dreams up.

Longtime friends Matt Lasser and Josh Fisher cofounded Reap & Sow three years ago. They come to the operation from opposite sides of the farm-to-table movement: Lasser is a farmer, and Fisher is a chef (currently at Richmond's Kitchen Table Bistro). This year, the duo added a food program to Reap & Sow's offerings, using produce from the farm in value-added products. To help get the product line up and running, they brought on former Carte Blanche food cart co-owner Chris Donnelly.

"I had a bunch of random microgreens in the greenhouse and some herbs in the freezer," Lasser explained. "Josh threw out the idea of a Green Goddess, and Chris and his brain somehow took all these various flavors and put them together."

The dressing sold out quickly at the first Burlington Farmers Market of the year, so I made sure to preorder a bottle through Reap & Sow's online farmstand for pickup on May 15. Lasser can't predict how often the dressing will make an appearance; in true farm-to-table style, the farm's offerings will change based on what's ready for harvest.

Reap & Sow's amped-up version of the old-school dressing packs a ton of early spring flavor into each swipe of crunchy crudités. Strolling a farmers market and shopping for dippable veggies — French breakfast radishes; asparagus; whatever's there, really — is a fun pre-picnic activity.

Summer picnics will benefit from just about anything from Reap & Sow — dip, charred-ramp-and-bacon jam, fermented sodas, potato chips, or any of the umpteen products that might appear at its booth this summer. 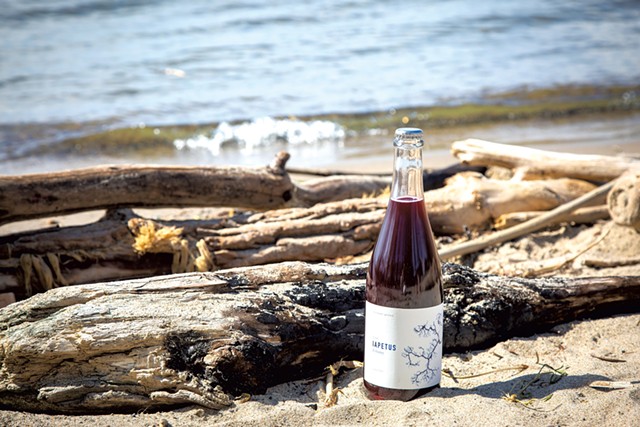 When picnic adventures involve frolicking in a remote field or sitting on the beach in the hot summer sun, getting totally sloshed isn't a totally great idea. Lately, instead of wine, I've gravitated toward piquette — an ancient, low-ABV, wine-adjacent beverage. And Iapetus, the natural wine project from Shelburne Vineyard winemaker Ethan Joseph and his team, makes a damn good one.

After grapes have been pressed for wine, piquette is made by adding water to the leftover skins, stems and seeds. The remaining sugar ferments, resulting in an alcohol content that's more like an easy-drinking session beer than a glass of wine.

"It's essentially like steeping a tea bag twice," said Sipha Lam, owner of Wilder Wines on Cherry Street in Burlington. Lam chose Iapetus' Tributary piquette for the May offering of her new shop's monthly wine club. She's a fan of the project's wines and wanted to support the local vineyard.

"Plus, piquettes are trending," Lam explained. "I wanted to introduce people to a different style of winemaking, and it's also just something super refreshing, fun and seasonally appropriate."

Iapetus' juicy, bright piquette has a flirty fizz; it lacks the full-on bubbles of some sparkling wines, but there are enough to jump around your taste buds a bit. Tributary is made with a blend of skins from six Vermont-grown grapes, harvested from vineyards in Shelburne and Charlotte. At 5 percent ABV, it's light and easy drinking, especially if you manage to keep it cold.

"It's a perfect picnic wine," Lam said. I agree.

Olives are a recent addition to my list of picnic staples. For most of my life, I couldn't stand them. The only reason I tolerate them now is O Bread Bakery's olive ciabatta.

I even have the Shelburne bakery's local delivery schedule memorized: Drop-off of the delightful loaves is generally Monday, Thursday, Friday, Saturday and Sunday. (Loaves are also available curbside at the bakery or via preorder at the Shelburne Farms Welcome Center and Farm Store.)

Ciabatta is an ideal picnic bread because it's interactive. Don't worry about packing a knife — just rip off a chunk and pass it along. Its chewy texture gives you something to do during a pause in conversation.

Conversely, the bread can also be a conversation starter. The olives studded throughout the loaf — each a briny little salt bomb — have a way of sneaking to the surface. Instead of looking for shapes in the clouds, I like to look for shapes in my ciabatta: "I see a hippo," or "I see a shoe" — which would be appropriate, given that ciabatta means "slipper" in Italian.

O Bread packs a variety of olives into each loaf, including whole dry-cured herby black olives from Provence and a blend of cracked greens and purples.

If the bakery's website is any indication, I'm not the only one who has used this ciabatta as a gateway to the world of olives. "I can only tell you that my mother, who eschewed olives for eighty-plus years, became an enthusiast of this bread," the web description says. I'm happy to have found it after only 30.