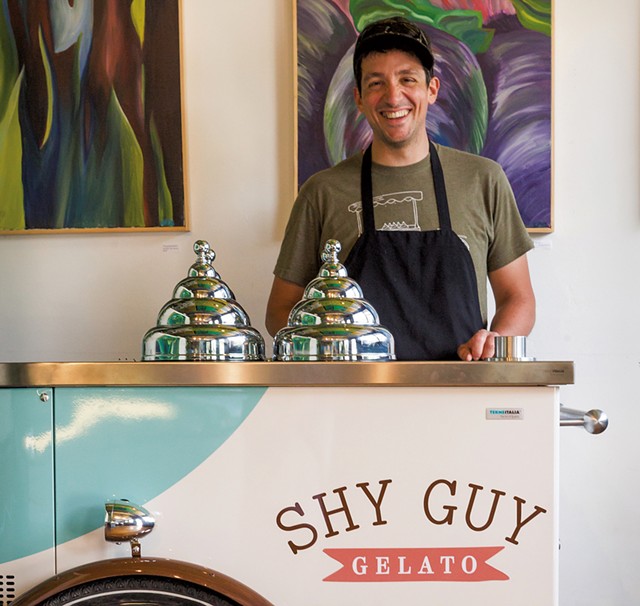 On March 26, Shy Guy Gelato sold its final batches of gelato from its original storefront at the corner of St. Paul and Howard streets in Burlington.

Die-hard fans jumped to preorder pints of honey-lavender, pistachio, peanut butter-milk chocolate chunk and s'more gelato, as well as dark chocolate and raspberry sorbet. They needed to stock up for the estimated monthlong closure before Shy Guy reopens in its new home at 198 St. Paul Street.

In the thick of construction, gelateria co-owner Paul Sansone carved out a few minutes to chat about the move — and his favorite overlooked gelato flavor — with Seven Days.

SEVEN DAYS: After six years in Burlington's South End, what prompted the move to downtown Burlington?

PAUL SANSONE: We moved, basically, out of an old building that was in pretty rough shape. I love the neighborhood. [It's been] the most supportive neighborhood ever. But you know, there's only so much money you can dump into somebody else's building before you just can't do it anymore.

I hope it brings us more foot traffic. We do so much of our sales in the afternoon and after dinner. After 8 p.m. down on the corner of St. Paul and Howard, there's not much foot traffic at all.

SD: Will you have more seating, and will you continue to sell only pints in winter and scoops in summer and fall?

PS: For summer, there's so much nice outdoor seating here. There'll be a couple spots at the window to sit down inside, and then we'll probably stick some tables in here for the wintertime, as well.

We'll definitely still do preordered pints in the winter. I'm hoping it'll be just busy enough to warrant scooping year-round. Anything to increase revenue in the wintertime is good.

SD: What is the flavor on your whole list that you think is underappreciated, that more people should order?

When I was a little kid, I only liked vanilla creemees. I was not into chocolate. People always want, like, trash in their gelato, but fior is the good purity.

The original print version of this article was headlined "Smooth Move"