It takes a lot of caffeine to keep up with Vermont's ever-evolving coffee industry. The pandemic might have disrupted the routine of stopping for a daily cuppa on the way to the office or an afternoon pick-me-up with coworkers, but it hasn't prevented new cafés from opening.

Vivid Coffee took over the New Moon Café space on Burlington's Cherry Street in November 2020; Uncommon Coffee opened for curbside pickup in the Essex Experience a couple of months before that. PK Coffee reopened in a new Stowe location this winter; 802 Coffee launched a café and roastery in Barre in March; and the owners of Vittles Espresso & Eatery are in the process of taking over the Local Buzz in downtown Bradford, adding a brick-and-mortar spot to their existing coffee-truck business.

In 2021, three additional businesses have joined the coffee scene in Chittenden County. I've missed everything about coffee shops: making small talk with talented baristas; the soundtrack — gentle clacking of keyboards, grinders pulverizing beans, bursts of steam, a killer playlist; even sharing tables with strangers. And then, of course, there's the coffee itself, made with care by pros. I decided to check out the newbies, easing back into their worlds of caffeination with takeout as I — and many working in the industry — await full vaccination.

The first time I noticed the new roadside sign in front of the Great Northern and Zero Gravity Craft Brewery's tasting room, I thought pandemic isolation had finally gotten to me. "Waffee and Coffles"? I need new glasses. Or a new brain. Or waffles? Oh, waffles!

"We were aghast when the sign came back from the printers and they'd mixed that up," Jamie Barrat-Bluck deadpanned during a recent phone call. After a pause, he chuckled and added, "We try not to waste opportunities at being irreverent."

The waffles coming out of the walk-up window at the Pine Street hot spot are seriously good, though. They're buttery, brioche-like, yeasted waffles, with crispy, lacy edges and insides so light and pillowy you could nap on them.

The whimsical waffles are fun-size; unlike their bulky Belgian-style brethren, these fit in your palm and should be eaten with your hands. Think of them as a snack or a coffee accompaniment, not a full-blown breakfast ($2 for one waffle, $3 for two).

This new aspect of the combined businesses launched in mid-January. Barrat-Bluck, whose title is now "Coffee/Waffle Person," had been working at the brewery's tasting room as a bartender. When he expressed interest in utilizing his background in coffee, Zero Gravity and the Great Northern quickly jumped on board.

"The [Great Northern's] espresso machine just sitting there idle was sort of sad for everybody," Barrat-Bluck explained. "It represents a nice, normal base for things, to be able to get coffee in the morning."

Great Northern's bar manager, Jeff Baumann, was the catalyst for the waffles — when the word was mentioned, he immediately ordered a waffle iron. The project went from conception to realization in about a week, Barrat-Bluck said; the Great Northern kitchen staff "clapped their hands and made the waffle recipe appear out of nothing." Brio Coffeeworks owners Magda and Nate Van Dusen helped dial in the coffee side.

The coffee menu is short and sweet: filter coffee, espresso (Brio's Belle Epoch blend), cortado, cappuccino, latte, latte with maple, mocha — all with oat or whole milk; some are also available iced. I think a cortado ($3.50) — a few ounces smaller than a cappuccino — is the perfect ratio of espresso to milk, so that's what I ordered. The oat milk was well steamed, the espresso shots perfectly pulled. It lived up to the promise that was underlined above the takeout window: "Beer, Food, Cocktails, Wine, & Damn Good Coffee."

I sat and enjoyed the relative quiet of mid-morning on the Zero Gravity outdoor patio. Later, Barrat-Bluck described what I'd done as "the height of the experience."

"There's sort of an aesthetic ideal to sitting down here with a couple of waffles and a cappuccino," he said. "And, I don't know, reading some Baudelaire or something." Modernité at its finest.

Tip of the Cap

Walking into Black Cap Coffee & Beer on the Church Street Marketplace felt like stepping into a time warp.

It wasn't the décor. The shop nails the contemporary rustic-industrial combo of white subway tile, reclaimed wood and dangling Edison bulbs. And it wasn't the menu, which offers locally roasted coffee, pastries baked in-house and a cooler full of the state's best microbrews.

It was that people were sitting in a coffee shop, slowly sipping lattes and cups of tea while reading books and working on laptops. It was a scene out of the Before Times, complete with a barista politely repeating the phrase, "There's an almond milk chai ready on the bar," trying to grab the attention of a customer deep in conversation with a long-lost friend.

The familiar layout of the space, which was the longtime home of Uncommon Grounds, added to the effect. The coffee-roasting machine formerly by the front door has been replaced by fridges full of beer and shelves of artisan goods. But the counter still stretches down the right-hand side of the café, with a pastry case full of cookies, cakes, quiches, croissants and churro morning buns tempting customers as they wait to order.

The chocolate-dipped cannoli ($4.95) caught my eye. I paired my pastry with an iced maple latte from the "Favorite Lattes" section of the menu ($5.90 for 20 ounces). Black Cap uses coffee from Waterbury's Brave Coffee & Tea; the two shots of espresso stood up well to the maple's sweetness, and it was easy to see why it's a favorite.

I missed the breakfast sandwiches by a few minutes — they're available until 11:30 a.m. daily. But the café serves lunch all day, with a variety of sandwiches available on toasted ciabatta or gluten-free bread. Black Cap's version of the Vermonter ($9.95) is a tasty take on the state's unofficial sandwich, with smoked turkey, crisp apples, Cabot cheddar and perfectly caramelized onions.

The Church Street outpost opened in February, joining the original Black Cap location in Stowe, which opened in 2010, and one in Morrisville that opened in 2017.

Sweet as a Rose 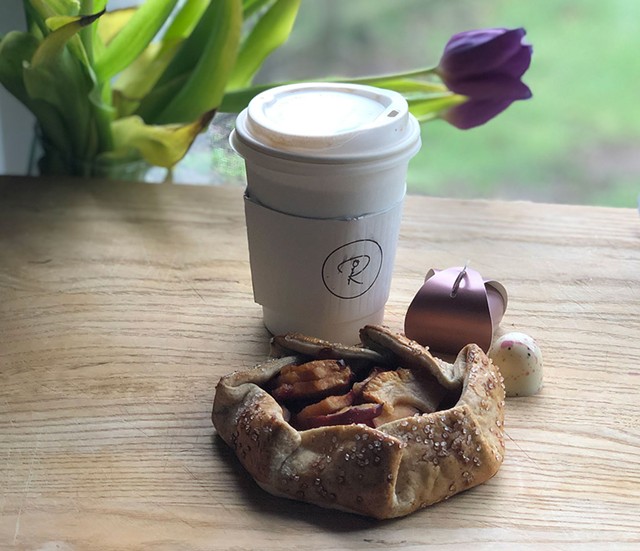 "It's like a bath bomb, but better." That's how Alexander Brooks, the barista at Winooski's newest chocolate shop, market and café, described the hot cocoa bombs — and how I almost ended up buying a basketful to bring home and fill my tub.

Rosie's Confections first launched as a CBD edibles company in January 2020, based in St. Albans but selling mostly through e-commerce and farmers markets. The brick-and-mortar location in Winooski held its soft opening in February 2021 and added pastries and coffee for its grand opening on Easter weekend.

The tiny family-run shop is stocked with ethically sourced goods, including owner and head chocolatier Emma Rose's elegant handcrafted chocolate and CBD-infused confections. The hot cocoa bombs are on the café menu, too ($7), served with steamed milk (or oat milk for 50 cents more). The fist-size bombs contain drinking chocolate and marshmallows from Nomadic Kitchen inside a chocolate shell; when hot milk hits the shell, it melts and the marshmallows pop out, leaving a decadent chocolaty drink.

"They were so popular at our soft opening that they sold out twice," Rose said. "I basically spent two weeks in the kitchen making more."

The café serves coffee from Pennsylvania's Moka Origins, a bean-to-bar chocolate and specialty coffee company that started as a community-farming project in Cameroon. Rose first found Moka in her quest to source a high-quality, direct-trade white chocolate — which she now uses in confections such as the green- and pink-splattered rose and pistachio bonbon ($5), which I couldn't resist adding to my order.

"We're very, very picky with our coffee, and Moka made the cut," she said. "It's just really good espresso."

I rounded out my to-go order with an apple galette ($4) from the pastry case, though I also eyed the sky-high croissants. All of the pastries at Rosie's are from Red Hen Baking; Rose's mother once worked for the Middlesex bakery, and their use of local ingredients was a natural fit for Rosie's ethical sourcing mission. Rose said Red Hen doesn't deliver its pastries — only bread — but Brooks lives in Barre and picks up the freshly baked goods on his commute to Winooski every morning, making the café one of the only other places to sell them.

Rosie's is currently running the Save Chocolate Campaign, which uses chocolate tastings, trivia and other events to teach customers about the chocolate industry. I'll happily take a side of education with the shop's sweet treats.