Three Local Albums (and One DVD) You Probably Haven’t Heard

To that end, here are three albums, and a concert DVD, that likely flew under the radar of your average Vermont music fan. In some cases, they represent the outermost boundaries of local music. Others simply slipped through the cracks. But each is deserving of a listen.

On September 29, 2012, Banjo Dan & the Mid-Nite Plowboys gave their final concert at the Barre Opera House, drawing the curtain on a 40-year career as Vermont’s bluegrass godfathers. Forty and Farewell, a recently released DVD, presents that epic two-set hoedown and includes a short documentary detailing the band’s history.

It’s not exactly The Last Waltz, but Forty is a fitting, and at times touching, farewell. It includes Banjo Dan classics, such as “Death Come Down to Danville” and “I’ll Take the Hills,” as well as a clever mix of classic and contemporary covers.

The performances here aren’t always perfect, but the Plowboys play with enough boyish energy and emotion to make one wonder if they retired too soon. But all good things must come to an end. With Forty and Farewell, at least fans can still visit whenever they’d like. 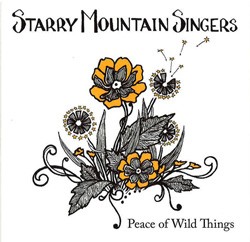 Is vocal music experiencing a renaissance in Vermont? In recent months, several solid albums from vocal locals have emerged, suggesting a renewed interest in the style. The latest is Peace of Wild Things from Starry Mountain Singers, composed of amateur and professional vocalists. Though led by North Carolina’s Susannah Park, some of the nine members hail from Vermont and New York. Collectively, their credits include work with Meredith Monk and appearances on public radio’s “A Prairie Home Companion” and “Mountain Stage.” The group also features three members of Brooklyn-based country band the Sweetback Sisters and up-and-coming Americana songwriter Nora Jane Struthers of Bearfoot.

Wild Things is a pleasant mix of traditional and folk-based material from the United States and Europe — Bulgaria and Georgia, specifically. It also features some original compositions from SMS members, including Struthers and Vermont’s Jeff Fellinger. While the material is largely rooted in trad styles, the performances suggest a modern sensibility. The result is a collection that impresses from a technical standpoint and is accessible for the casual listener, as well.

Adrian Aardvark is the alter ego of Plattsburgh, N.Y.’s Christopher Rigsbee. Released in late 2012, Hidden Magic Revival is a ponderous collaboration between Rigsbee and what looks to be the Lake City’s entire music scene. The album’s credits include some 15 additional musicians on instruments ranging from guitar and drums to violin, accordion, banjo and saw. Collectively, the group is something like P-burgh’s answer to Broken Social Scene — if somehow fronted by a supremely dejected Stephin Merritt of the Magnetic Fields.

Though ambitious in scope, the record is a difficult listen, in large part because of Rigsbee’s baleful, often tuneless croon. The songs here were inspired by a personal trauma Rigsbee suffered earlier last year, and they expose a blunt, unyielding despair. It is a deeply dark work, only somewhat leavened by the intriguing arrangements in which Rigsbee couches his anguish.

Victor Rudolph Gittens is a Barbados native who recently settled in Addison County, Vt. An aspiring singer, he recorded his debut, Our New Beginnings, last year in Barbados and, according to numerous phone calls placed to Seven Days, has been waiting for some big-time label to sign him and whisk him away to superstardom so he can release it to a wider audience. While it is unlikely that Universal will come calling anytime soon, Gittens’ debut does have a singular charm. If nothing else, there’s probably never been another local album quite like it.

The record opens on “In Memory of Michael Jackson,” a synthy, saxophone-led “We Are the World”-ish paean to the late, great Jack-O, in which Gittens belts, in call-and-response fashion, “Michael … Jackson (Michael, Michael) / We will remember you (Never be forgotten).” He goes on to implore, “All you nations come together (Ah-ah) / And sing of peace in this song for him.”

We’ll say this: The man can sing. He boasts a smooth, powerful tenor that resembles something like a Caribbean Aaron Neville. On the next non-MJ cut, “The Olympian,” he is undeniably charismatic. Ditto the New Wave-y electro-pop version that follows. And yes, there is an instrumental version after that.

Gittens may not be bound for stardom just yet. But his enthusiasm is infectious, making Our New Beginnings one of the more endearing Vermont albums in recent memory.