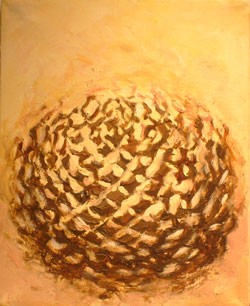 Each of the dozen members of 215 College Artists’ Cooperative is entitled to curate an exhibition during the year. The current “Small Works” show, originating with Burlington painter Elise Whittemore-Hill, is a dynamic display of diminutive works.

In her curatorial statement, Whittemore-Hill writes that a “shared vocabulary of form is what brought this exhibit together.” Those common forms come from the natural and human worlds, and all three of the participating artists — New York painters Anne Russinof and Tony Saunders and Whittemore-Hill herself — bolster their small-scale pieces with repeated passages, interesting chromatic harmonies and various degrees of abstraction. In addition to sharing a “vocabulary of form,” all three artists have simplified their images to basic spatial elements that appear in picture planes just a few layers deep. They are shallow and graphic rather than evoking windows into infinite space.

Whittemore-Hill’s examinations of plant forms often present Fibonacci spirals — shapes that exist in nature, yet are key to understanding the aesthetic concept of the Golden Mean. Her 8-by-10-inch “Cucurbita” looks like a twisting shell but is actually rendered from a tubular bit of plant anatomy. She crowded the form diagonally across the canvas, making it seem more massive than the modest dimensions of the painting suggest, and heavily modeled the lights and darks of the subject. “Capitulum” is a spherical seed pod whose matrix could likewise be simplified into a spiral. Rhomboid shapes wrap around the monochromatic sphere before fading into negative space around the pod’s edges.

Russinof writes in her artist statement, “This selection of small paintings seeks to embody the spontaneity of drawings in the language of paint.“ Her oils are all 12 by 10 inches, and their compositions are quite simple. Like wallpaper designs but more painterly, Russinof’s nine main pieces consist of shapes layered over richly colored backgrounds. “Weave” is composed of nothing more than vertical turquoise brushstrokes over a pale purple field. “Buttons and Bows” consists of pink brushstrokes over a bright green surface.

At 16.5 by 9.5 inches, Saunders’ acrylic-with-collage pieces are relatively monumental. Like Russinof’s paintings, they include repeated forms, but those of Saunders are more like echoes than repetitive elements. His artist statement points to his work with Alzheimer’s patients: “A new visual vocabulary started to evolve out of those experiences,” he writes. In his current pieces, “colors, memories, half truths and fragments of thoughts all work together to express a moment, a relationship, a love of life.” As that upbeat description suggests, there are no moody shadows in Saunders’ works, which are actually quite decorative.

His “Q&A” comprises three sheets of painted paper. The lowest layer is a sheet of deep red with black brushwork. It is overlaid by a sapphire-blue vertical strip, and two pale gray shapes appear to be grafted onto the blue. Saunders’ background sheets are slightly irregular, and the pieces pasted over them break the rectangles by spilling past their edges. His 16.5-by-19.5-inch “Forecast” is a fairly complex organization of painted pieces of marbled blue and green sheets of paper, including some hard edges that contrast with the marbling. Red-orange rectangles float over the cooler hues.

Besides the individual bodies of work on the walls of 215 College, a collection of more than 30 pieces by all three artists appears. That nicely busy installation demonstrates their similarities — in fact, it can be difficult to determine who made what. It’s as if Russinof, Saunders and Whittemore-Hill had listened to the same song from different places in a concert hall, then used simple visual lyricism to communicate what they experienced and felt during the performance.