By Sally Pollak and Carolyn Fox

On the aptly named Bakery Lane in Middlebury is a two-in-one business — Haymaker Bun and the Arcadian — that's joined by ownership, locale and a menu item that's pop-in-your-mouth delicious.

The owners are married couple Caroline and Matt Corrente. Caroline is the pastry chef at Haymaker, a morning café that serves brioche buns, pastries and cakes, along with coffee, tea and espresso drinks. Matt is the chef of the Arcadian, an evening Italian restaurant known for housemade pastas, seafood dishes and craft cocktails.

The location is a trilevel building with a wall of windows that overlooks Otter Creek. And the menu item that ties the two eateries together? A mini bun, light and twisty with rosemary olive oil and Parmesan. It comes from Caroline's bakery and is an ideal accompaniment to a plate of pasta and a salad from Matt's kitchen.

The Correntes opened their restaurants in November 2018. Establishing businesses in a shared space made financial sense, Matt explained, and was a way for him and Caroline to pursue their own culinary passions.

"A neo-French bakery and a neo-Italian restaurant [are] obviously two different European traditions," Matt said. "But because those two countries are so close, there's kind of a harmony built into it. Their food gets along with each other."

The menus feature a rotating selection of seasonal dishes, along with classic fare. Caroline's sweet bun varieties include the OG, a worthy ode to traditional cinnamon, and cranberry-orange-clove; savory buns are made with ingredients such as prosciutto, cheddar and broccoli. At the Arcadian, tagliatelle Bolognese shares the menu with squid ink pasta with rock shrimp, salami and herbs.

Haymaker Bun and the Arcadian are currently open three days a week for takeout only; check social media for updates to the business model and hours.

Meanwhile, to more accurately reflect what happens at 7 Bakery Lane, the street should also be called Pasta Place.

Trails are open year-round, from dawn to dusk, at 255 Sherman Hollow Rd., Huntington 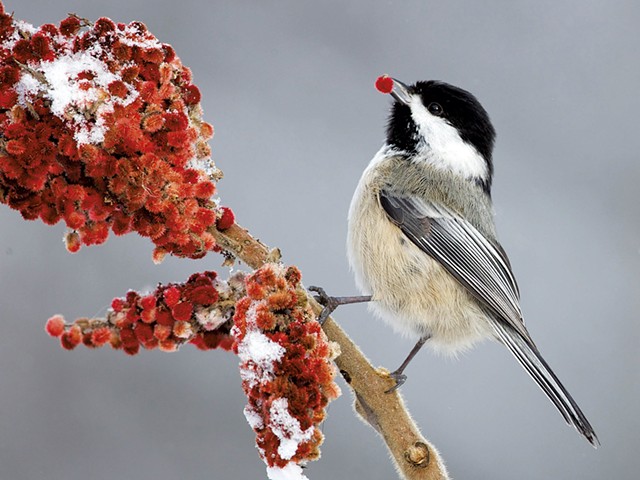 Less than half an hour's drive from Burlington, the Green Mountain Audubon Center can feel like "a world away," said naturalist and communications manager Gwendolyn Causer. On its 255 acres, visitors can explore trails that pass northern hardwood forests, beaver ponds, a hemlock swamp and the Huntington River.

"What's really unique is how many different kinds of habitat our trails wind through," noted Causer.

More Vermonters have been experiencing the trails since the pandemic began; Causer said trail use was up over the summer. The snow season offers reason to return — and not just because folks can now snowshoe or cross-country ski.

For one thing, "If you're into birding or new to birding, it can be much less overwhelming to go" in the winter, Causer explained. Though there are fewer winged residents this time of year, birders can still spot woodpeckers, hawks, ruffed grouse and many other species. And from January 15 to February 15, the birding public is invited to participate in the Winter 2021 Climate Watch survey.

Animal tracking, too, is a popular winter pastime. "When I go out there, I'm looking for tracks of fox and weasels and minks," Causer said. "That's what I really enjoy, getting a visual sense of all of the wildlife that is using the center and in such close proximity to us all the time — and we don't know it until it snows."

Audubon Vermont, a nonprofit conservation organization, oversees the nature center — the oldest operating in the state. Visit its website to learn about pandemic protocol for the trails and to take advantage of online resources, such as Ask a Naturalist live programming and Audubon From Home mini nature lessons for kids.

In Vermont, at least, you needn't travel far from home to appreciate nature.

When the pandemic hit, the first things Americans panic-bought were toilet paper and hand sanitizer. Next in the grocery cart? There's a good chance it was flour. Here in Vermont, Norwich's King Arthur Baking saw sales of its signature red-and-white bags of flour skyrocket in the spring.

But then what? "People get this flour into their kitchen, and then they're like, 'OK. I'm home. I have time. I want to bake — I'm not quite sure how to do it,'" explained Amber Eisler, director of the King Arthur Baking School. With state-of-the-art classrooms in Vermont's Upper Valley and Washington's Skagit Valley, the school is known for its in-person classes in everything from puff pastry and pies to sourdough and sticky buns.

After months of perfecting a virtual format, the school took its classes online in mid-August. When interviewed in early December, Eisler said the school had already served about 2,000 students with a rotation of 65 different baking classes. It's offering at least a dozen classes every week for all levels of bakers, including kids.

"People are coming from all across the country," she said. "In every class, most time zones within the United States are represented, and we've seen a number of international students, as well. It's been a great way for families and friends to connect ... They can see each other and feel like they're doing the same thing together, even if they're thousands of miles apart."

Classes are live and limited to 24 participants, which means home bakers receive individualized attention from the instructors. "We like to have people focus their camera on their work surface, so we can see what they're doing and provide some tips and suggestions," noted Eisler. "That's something that people are just hungry for right now — connection."

That, and cream puffs.